Luminex Resources Corp. (TSX-V: LR) (US OTC: LUMIF) is pleased to provide a Camp Zone drilling update at the Condor Project, located in southeast Ecuador with results from holes CC19-19 through CC19-25, as well as a drilling extension to previously announced CC19-04. All of the new Camp Zone step-out holes and the extension to CC19-04 hit significant high-grade mineralization. The Company completed 12,918 metres at the Camp Zone across 25 holes in 2019. Results from these holes will form the basis for a maiden Camp Zone resource which Luminex expects to announce by March 2020.

Hole CC19-21 was drilled below the previously reported hole CC19-18 and was successful in demonstrating not only apparent width continuity, but also a significant increase in grade at depth. Hole CC19-18 contained numerous zones of mineralization, most notably 4.8 metres of 4.8 g/t gold and 37.5 g/t silver along a contact zone between rhyolite and a foliated granodiorite (November 28, 2019 press release). In CC19-21, this zone of mineralization was cut again 100 metres deeper with an exceptional intercept of 5.8 metres grading 8.4 g/t gold and 98.9 g/t silver (Figure 3).

Due to the Camp Zone being located on sloping terrain, as the steeply dipping mineralization is drill tested to deeper levels, it is more efficient to collar drill holes from the footwall side. As such, holes CC19-23 and onwards have been collared downhill on the footwall side of the zone (see Figure 1).

Drilling with two rigs restarted at the project on January 6th. Several additional holes are planned to further define the existing zone to depth before continuing exploration along strike. Additionally, surface work continues to define new drill targets at Prometedor, Soledad and other areas the company expects to drill test in the first half of the year.

All Luminex sample assay results have been independently monitored through a quality control / quality assurance protocol which includes the insertion of blind standards, blanks as well as pulp and reject duplicate samples. Logging and sampling are completed at Luminex’s core handling facility located at the Condor property. Drill core is diamond sawn on site and half drill-core samples are securely transported to ALS Laboratories’ sample preparation facility in Quito, Ecuador. Sample pulps are sent to ALS’s lab in Lima, Peru for analysis where gold content is determined by fire assay of a 50-gram charge with ICP finish.

Silver and other elements are also determined by ICP methods. Over-limit samples assaying greater than 10 g/t gold and 100 g/t silver are re-analyzed by ALS using fire assay with a gravimetric finish. Luminex is not aware of any drilling, sampling, recovery or other factors that could materially affect the accuracy or reliability of the data referred to herein. ALS Laboratories is independent of Luminex.

Leo Hathaway, P. Geo, Senior Vice President Exploration of Luminex and the Qualified Person as defined by National Instrument 43-101 Standards of Disclosure for Mineral Projects, has reviewed, verified and approved the scientific and technical information concerning the Condor Project in this news release and has verified the data underlying that scientific and technical information.

Luminex Resources Corp. is a Vancouver, Canada based precious and base metals exploration and development company focused on gold and copper projects in Ecuador. Luminex’s inferred and indicated mineral resources are located at the Condor Gold-Copper project in Zamora-Chinchipe Province, southeast Ecuador. Luminex also holds a large and highly prospective land package in Ecuador, including the Tarqui and Pegasus projects, which are being co-developed with BHP Group plc and Anglo American plc respectively. 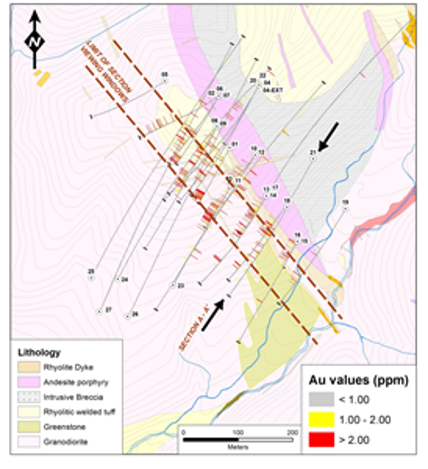 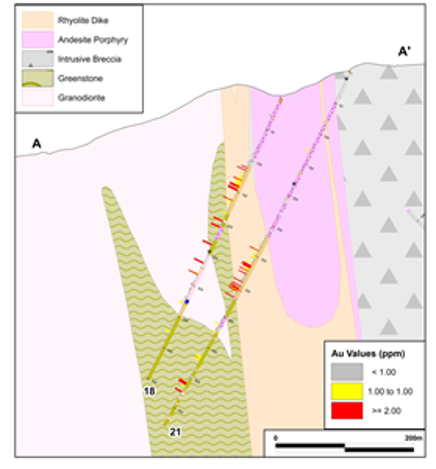 Section showing contact mineralization in CC19-18 and repetition and strengthening of the zone at depth in CC19-21. 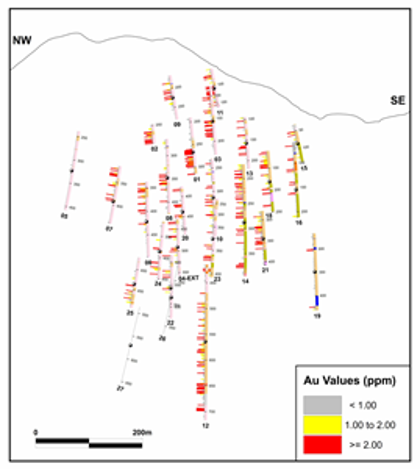 Vertical longitudinal section along strike of the high-grade mineralization. Systematic drilling of the gap between the deep intersection in hole CC19-12 and the holes above it is underway. Limits of this section are the map extent of Figure 1. Only the last two digits of hole numbers are shown.