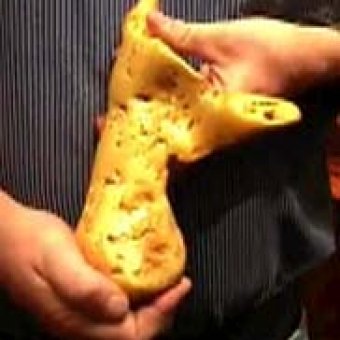 A gold nugget with an estimated value of more than $300,000 has been unearthed near Ballarat in Victoria’s west.

An amateur prospector found the nugget weighing 177 ounces, or 5.5 kilograms, with a metal detector just outside Ballarat in a popular area for prospecting.

The owner of The Mining Exchange Gold Shop in Ballarat, Cordell Kent, said the find was one of the most significant in his 20 years in the business.

“Over that period the sum total of my finds would be just over 100 ounces (2.8 kilograms),” he said.

“We have 800 prospectors on our books and only a couple of those have ever found a nugget over 100 ounces.

“So there’s only been one or two big pieces and they were found a long time ago.”

Mr Kent is seeking a buyer for the nugget on behalf of the lucky prospector, who wishes to remain anonymous.

“A lot of people think Victoria’s goldfields are dead and that there’s none left, but he (the prospector) has worked in an area where a lot of people have worked in the past but he persisted and he’s been rewarded.

“We are 162 years into the gold rush and it’s never totally waned, it’s just changed.”

The prospector is relatively new to the hobby and was totally overwhelmed when he brought it into the shop, Mr Kent said.

He found the nugget about 10.30am (AEDT) on Wednesday.

Mr Kent would not reveal exactly where the nugget was found.

FISSION URANIUM CORP. is pleased to announce the closing of... READ MORE