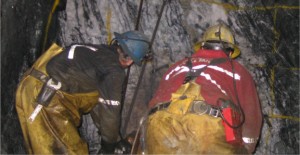 Liberty Mines Inc. (TSX:LBE) has entered into a definitive agreement with QMX Gold Corporation to acquire the Snow Lake gold project in Manitoba. Upon completion of the transaction, which is expected to close on or about November 25, 2013, Liberty Mines will have the following profile:

Liberty Mines has entered into a definitive agreement with QMX Gold Corporation to acquire a 100% interest in the Snow Lake Property through the acquisition of QMX’s wholly-owned subsidiary, in consideration for a cash payment of USD$20,000,000 to QMX. A deposit in the amount of USD$1,000,000 shall be released from escrow and paid to QMX in the coming days. The remaining purchase price of USD$19,000,000 shall be paid on upon closing of the transaction which is expected to occur on or before November 25, 2013. Liberty may extend closing until January 14, 2014 by paying to QMX an extension fee in the amount of USD$100,000. Closing of the acquisition remains subject to Liberty Mines receiving all necessary government and regulatory approvals in Canada and China, including shareholder approval, and securing the financing necessary to complete the acquisition.

The Corporation is also pleased to announce that Mr. Geoff Stanley has been appointed to the Board of Directors of the Corporation to assist with its current repositioning. Mr. Stanley has over 25 years of experience in the mining equities business with a number of major global institutions including UBS, Goldman Sachs, and the Bank of Montreal. Throughout his career his principal role has been in equities analysis, where he was a highly ranked in the Australian, US and Canadian markets. Formerly the number one ranked metals and mining analyst in the North American market (Wall Street Journal), Geoff is now active as a director of resource companies operating in the gold, base metals, and bulk commodities. Geoff is a Fellow of the Society of Economic Geologists, Fellow of the AusIMM, and a member of the CIM, and is also a former president of the Metals Analysts Group of New York. He is qualified with a triple major in geology, geophysics and physical geography, and a B.Sc (Hons) in geology from the University of Tasmania. Mr. Stanley replaces Mr. Bruce Humphrey who has resigned from the Board.

In addition, Ms. Jennifer Wagner has been appointed the Corporate Secretary of the Corporation. Ms. Wagner is a corporate securities lawyer who works as a legal consultant to several publicly traded companies in the mining industry. Previously, Ms. Wagner practiced securities law at a major Canadian law firm. She obtained her Bachelor of Laws from the University of Windsor and her Bachelor of Arts from McGill University in Montreal.

The technical and scientific content of this press release has been reviewed and approved by David M. Rigg, P.Geo. and qualified person under NI 43-101. As President and CEO of Liberty, Mr. Rigg is not considered independent.