Mid-February 2020, hot, sticky & coated in the film of mysterious grease that applies itself during extended public transport use, I stepped onto Jamaican ground for the first time with Chris, Spotlight Mining’s Production Manager. In all honesty, we’d agreed to come & film this project for a bit of a jolly in the coffee mountains & some fresh adventure, we didn’t know anything about the island’s geology or mining history & had only met the company’s owner 2 weeks prior at Round-Up in Vancouver! 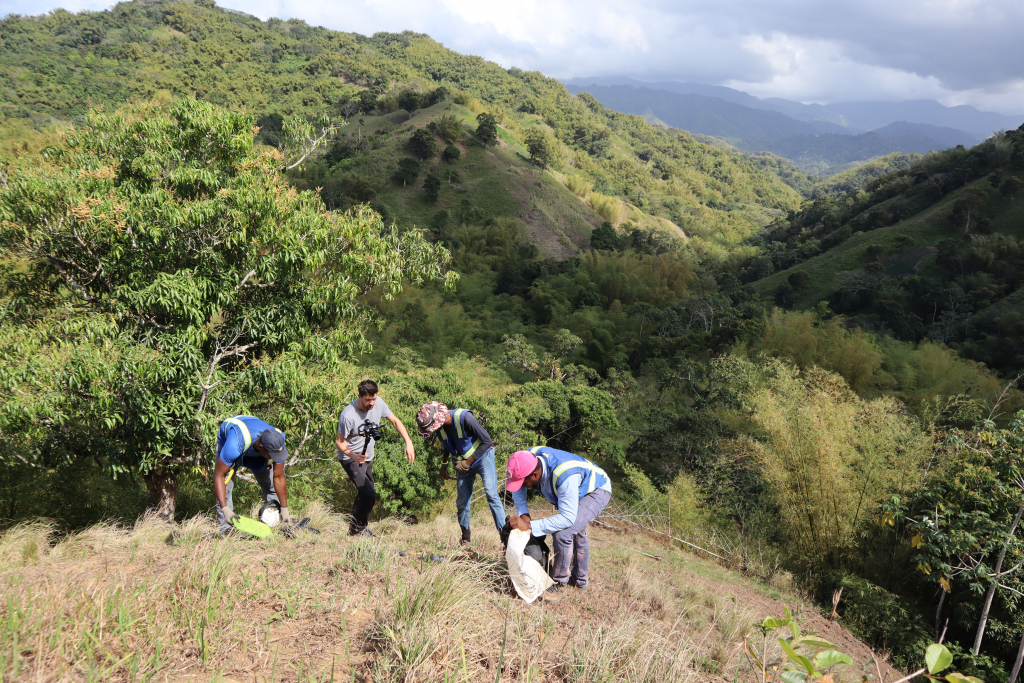 Chris filming a close upon a steep slope as one of GeophysX’s soil crews dig to a deeper sample horizon.

First impressions were, friendly. We were met by another Chris, who had recently moved from Montego Bay to work at the new Kingston office with Bobby & the GeophysX team; he told us a little of the island’s history & mining story.

Jamaicans believe they’re poor, & they are a little, in comparison perhaps to Sweden or New Zealand. The roads are potholed requiring rally-like precision to navigate at speed, the houses outside the capital mostly sit on mountainside stilts and there’s a lot of rugged subsistence farming. However, the intercity transport infrastructure was more developed than Canada’s, the public health announcements more reliable than in America’s, & the Jerk chicken & pork were better than anything I’ve eaten while living in Central Europe. 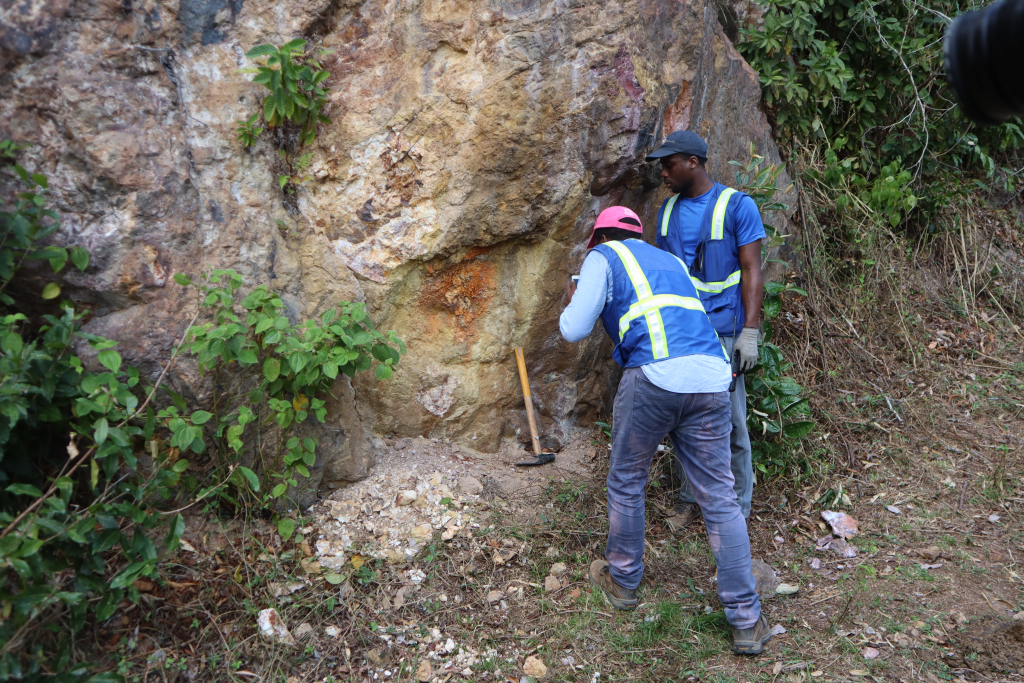 Geophysx teams use 2-way satellite GPS for mapping, and are also equipped with tools to photograph and record sample sites in detail. Geophysx has live access to all eight teams’ data for command and control, as well as safety.

There’s a lot of space for development on the island, but, she’s rich in culture & full of potential.

The biggest surprise was discovering that the ‘novel’ company we’d come along to have some fun with, were in fact a serious outfit who’d put $millions into the ground more efficiently than any other project we’ve seen this year. Robert “Bobby” Stewart, their founder & manager, tells us:

“After 30 years in the hospitality industry, I had a close brush with an illness, that caused me to reconsider my work lifestyle. I’ve loved geology since I was young, collecting rock samples and anything shiny”, he laughs; “I’m convinced that Jamaica has barely been scratched for metal exploration, despite some exciting and dynamic geology. I felt there was an excellent opportunity to start something new’.

‘GeophysX Jamaica’ may have already revolutionised the way exploration is approached on the island. Without direct access to experienced staff, or an existing exploration culture, Bobby flew in famous geos, weathered drillers & dusty academics from Canada, Germany & Australia. Instead of tasking them directly with the exploration, Bobby charged them with training up a local team of graduate geologists & supervising them as they managed the project themselves. That’s around 40 people who now have training in exploration field work, in a country that previously had (almost) none. 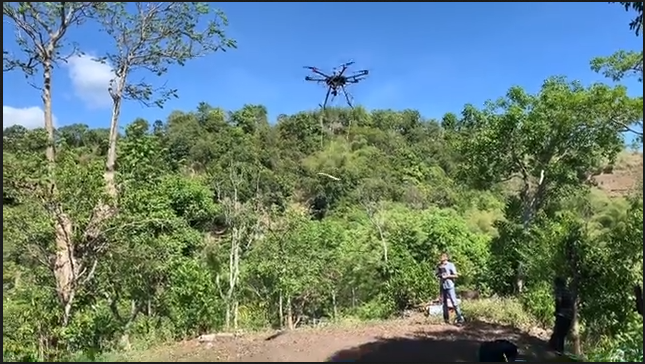 Awesome, lets go drilling! Ohhh wait a tick, there are no core drills in Jamaica. Another challenge on the uphill climb to discovery. “No Problem”, Geophysx bought its own rig & and brought in an Aussie driller with 40 years’ experience, to live on the island & train the local crew to run it! The NW Drills machine is purring away nicely under the watchful eye of the veteran & should be up on a mountainside while you’re reading this, poking holes into some exceptional high-grade vein systems & surface exposed high/intermediate-sulfidation style porphyry limbs.

Jamaica’s mineral endowment (ignoring her bauxite) is mostly related to back-arc magmatism, which made the area pretty uncomfortable 65 million years ago. It brought in vast dyke swarms, metalliferous fluids & great masses of absorbent ash. Plates to the north & south of the island are still crunching together to this day, uplifting & potentially creating new deposits. This is an active system to explore & we’ve now seen evidence of her riches…

Right on a hillside track, Bobby & his team took us to one of their ‘Yellow Man’ outcrops, a showing on the edge of a suspected porphyry system. The entire rock face was covered in weathered sulfur with visible mineralisation throughout. If this showing was in Canada it would already have been auctioned off at a laughable price & Teck would be uncontrollably dribbling over it.

Visually & mineralogically, it reminded me of Etruscus’ ‘Rock & Roll’ showing in BC, although, Yellow Man is bigger, with more data. We casually drove to Yellow Man in an hour from the city, rather than driving 6 hours, helicoptering 20 minutes & hiking for 2 hours to Rock & Roll. Bobby tells me he’s holding claims for a lot of these immense & accessible showings, the kind we all dream of finding, that hadn’t been documented until he started the Geophysx program islandwide. 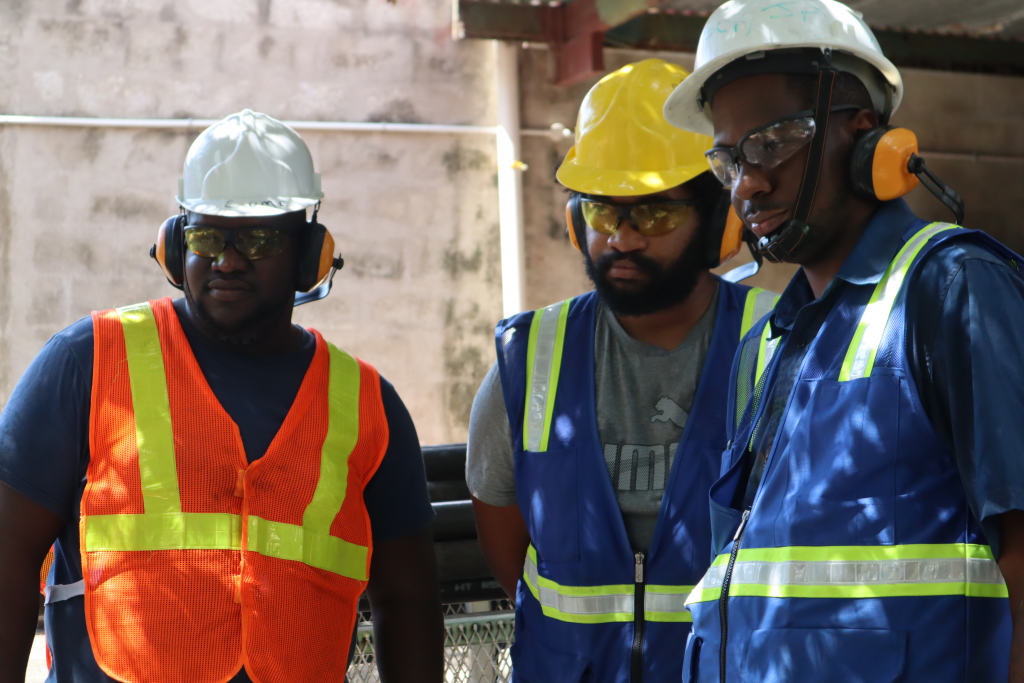 Bobby’s newly trained drill crew learning a few tricks of the trade from a veteran Australian driller at their Kingston HQ.

While currently a private company, they’re undoubtedly going to be seeking partners along the road. Their samples are meticulously stored in Canadian labs, their geology poured over by industry legends & their drill crews managed by Australia’s finest. This is probably one of the best exploration teams in the world right now, with access to funds, positive community relations & government support for development. 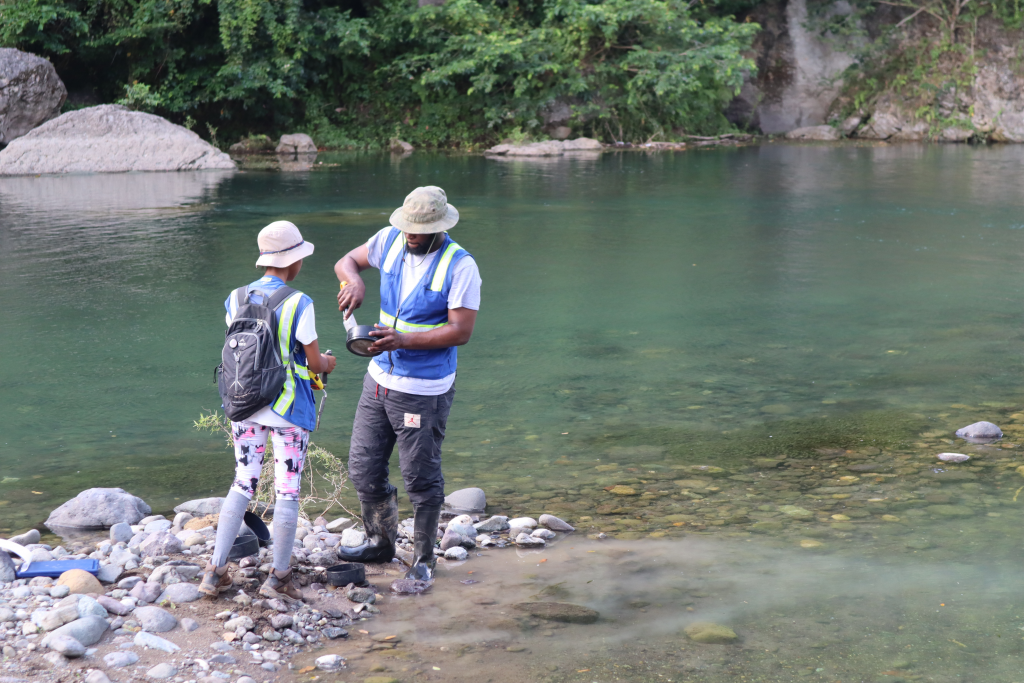 Panning in the beautiful clear waters of inland Jamaica.