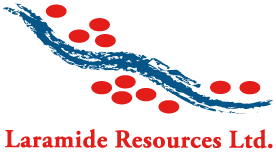 Marc Henderson, Laramide’s President and CEO, commented, “We received strong support from existing shareholders and were pleased to see a number of new supporters participate in Laramide’s placement, including new institutional shareholders. The proceeds of the placement allow the Company to progress the Church Rock Project towards development following the significant maiden NI 43-101 Church Rock Mineral Resource Estimate which was released in Q4, 2017.” Mr. Henderson added, “We continue to believe Church Rock is potentially one of the highest quality undeveloped ISR projects in the U.S. and would be an obvious beneficiary of any of the government policy actions under consideration which would assure U.S. domestic security of supply.”

The Company plans to use the net proceeds of the Offering to advance exploration and development activities primarily at Church Rock and Crownpoint uranium properties in New Mexico, USA, and for general corporate purposes.

The securities issued pursuant to the Offering are subject to a statutory four-month hold period expiring on October 21, 2018.

Certain officers and directors of the Company participated in the Offering, and whose participation constitutes a “related party transaction” as defined under Multilateral Instrument 61-101 – Protection of Minority Security Holders in Special Transactions. Such related party transaction is exempt from the formal valuation and minority shareholder approval requirements of MI 61-101 as neither the fair market value of securities being issued to the related parties nor the consideration being paid by the related parties exceeded 25% of the Company’s market capitalization. The participants in the Offering and the extent of such participation were not finalized until shortly prior to the completion of the Offering. Accordingly, it was not possible to publicly disclose details of the nature and extent of related party participation in the Offering pursuant to a material change report filed at least 21 days prior to the completion of the Offering.

The securities issued pursuant to the Offering have not been, nor will they be, registered under the United States Securities Act of 1933, as amended, and may not be offered or sold in the United States or to, or for the account or benefit of, U.S. persons absent registration or an applicable exemption from the registration requirements. This press release shall not constitute an offer to sell or the solicitation of an offer to buy nor shall there be any sale of the securities in any State in which such offer, solicitation or sale would be unlawful.

Laramide is a Canadian-based company with diversified uranium assets strategically positioned in the United States and Australia that have been chosen for their low-cost production potential. Laramide’s recently acquired Church Rock and Crownpoint properties form a leading In-Situ Recovery (ISR) division that benefits from significant mineral resources and near-term development potential. Additional U.S. assets include La Jara Mesa in Grants, New Mexico, and La Sal in the Lisbon Valley district of Utah. The Company’s Australian advanced stage Westmoreland is one of the largest uranium projects currently held by a junior mining company.