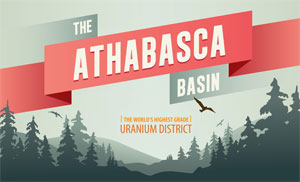 The initial field program will be focused on the “Gibbon’s Creek” target and will consist of:

The current program, in combination with the extensive historic exploration information available, will refine and define the targets for an anticipated initial drill program at Gibbon’s Creek in the winter Q1 2014.

Jon Armes, Lakeland’s President commented: “This is a very important milestone for the Company. Over the next several months there will be strong news flow from the program starting with the results from the RadonEx survey and boulder sampling leading to a drill program at Gibbon’s Creek.”

The Riou Lake Property consists of eight mineral claims totaling approximately 35,000 hectares that span roughly 80 kilometres between the communities of Fond du Lac and Stony Rapids, Saskatchewan. The property benefits from nearby infrastructure, with power lines and highways transecting the claims. The Gibbon’s Creek target is accessible year-round via Highway 964 and is three kilometres west of Stony Rapids.

A recently completed compilation of the historic exploration information available for the Riou Lake Property identified the Gibbon’s Creek target as a priority for immediate follow-up.

Significant previous exploration in 1978-1980 by Eldorado Nuclear consisted of:

The exploration identified a number of radioactive sandstone boulders, either coincident with the Gibbon’s Creek target area, or immediately to the south of it. The boulders assayed up to 4.9% U3O8. Also coincident with the target area is a significant soil geochemical anomaly with strong uranium anomalism. Numerous soil samples from the Gibbon’s Creek target contained between 5 and 10 ppm U, with background considered to be 1.0 ppm or less.

The Gibbon’s Creek target area is roughly coincident with a gravity low, which measures about 3 kilometres east-west, by 1 kilometre north-south. The gravity low is situated at the northeast termination of a greater than 15 kilometre, northeast trending conductive zone.

Historic drilling of the target area by Eldorado identified approximately 14 holes with anomalous radioactivity and/or geochemistry. Multiple holes intersected from 100 to 1,000 ppm uranium at or near the unconformity (about 100 m depth), with hole GC-15 averaging 0.18% U3O8 across 0.13 m. Recent modeling of the historic drill data has identified a structural co-corridor up to 1 kilometre in length, and up to 100 m across. Holes within and flanking this zone contained significant radioactivity and or anomalous geochemistry. Notable results include:

Due east of GC-15 about 500 m away, Hole GC-22 was abandoned in the sandstone upon encountering significant clay, while Hole GC-26 which was designed to undercut GC-22, encountered “extensive basement alteration, up to 72 metres.” The altered basement is further described as soft, highly altered, with extensive hematite, chlorite and clay alteration.

Approximately 1,000 m east to southeast of Hole GC-15, three holes, each spaced about 100 m apart, were completed along a north-south fence (GC-23, 25 and 24). Anomalous radioactivity was noted at the unconformity, also with values of up to 2,900 ppm nickel across 3.0 m within altered basement of GC-24.

More recent exploration on the Gibbon’s Creek target and the Riou Lake Property by UEX Corp. include airborne MegaTEM, gravity, magnetic and radiometric geophysical surveys, completed in 2005. Results of these surveys are being compiled, and will assist with exploration.

The extensive archived historic exploration data for the Riou Lake Property including the $3M+ of modern airborne geophysics completed by UEX Corp. is a great benefit to Lakeland. Lakeland is focused on testing targets, such as Gibbon’s Creek, where the depth to the unconformity is known to be shallow (ie. ~50-250 metres) increasing the economics of exploration and accordingly the potential success rate.  Much of the detailed ground prospecting and geophysical exploration on the property dates back to the late 1970’s and only covered a portion of the Gibbon’s Creek target.  The current exploration program is designed to use modern exploration techniques and cover the entire target.

The technical information above has been prepared in accordance with the Canadian regulatory requirements set out in National Instrument 43-101 and reviewed on behalf of the company by Neil McCallum, P.Geo., of Dahrouge Geological Consulting Ltd., a qualified person.

Lakeland Resources Inc. is a pure play uranium exploration company focused on the Athabasca Basin in Saskatchewan, Canada; home to some of the world’s largest and richest high-grade uranium deposits.