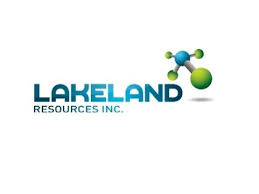 Lakeland Resources Inc. (TSX-V:LK) (FSE:6LL) is pleased to announce that it has closed a brokered and non-brokered private placement for total gross proceeds of $2,830,536.

Secutor Capital Management Corporation was lead agent in connection with the private placement of 5,580,000 Flow-Through Units and 6,147,795 ordinary Units for gross proceeds of $2,686,036.

Each Unit consists of one common share and one Warrant.

The Company has granted to the Agent an over-allotment option to increase the size of the offering by 20% of the FT Units and Units that are purchased under the private placement. The option is exercisable in whole or in part for a period of 30 days from closing on the same terms as set forth above solely to cover over-allotment.

Finder’s fees were paid on the non-brokered portion of the financing in compliance with the TSX Venture Exchange policies.

All the securities issuable will be subject to a four-month hold period from the date of closing.

Lakeland Resources Inc. is a pure play uranium exploration company focused on the Athabasca Basin in Saskatchewan, Canada, home to some of the world’s largest and richest high-grade uranium deposits.