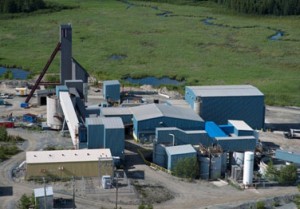 Production for the second quarter is expected to total over 29,000 ounces at an average grade exceeding 4.0 grams per tonne. Quarter to date, mill throughput has averaged approximately 2,500 tonnes per day, gold produced is approximately 27,000 ounces and gold poured is over 25,000 ounces. Cash operating costs per ounce, to be released with the Company’s full financial and operating results in early August, are expected to show significant improvement from the first quarter of 2013. The Company’s mill expansion is nearing completion, with commissioning to commence in late July and the expanded processing capacity of 3,000 tonnes per day to be achieved by early September 2013.

Supported by improved operating performance, and progress with its key growth projects, the Company is committed to achieving its key guidance for the year, including producing 120,000 to 135,000 ounces of gold at cash operating costs between US$800 and US$875 per ounce, with total capital investment of approximately $90 million.

Following completion of the mill expansion, production levels will increase to over 140,000 ounces on an annual basis at cash operating costs below US$700 per ounce. The Company is on track to commence generating net free cash flow starting in September, even at current gold prices.

Tony Makuch, President and CEO of Lake Shore Gold, commented: “We decided to update the market at this time, given that we are seeing a disconnect between the excellent progress we are making with our operations and projects and recent movements in our share price. Looking at our performance, our grades are coming up, our costs are coming down, our mill is operating extremely well and, over the next couple of months, our capital investments will drop dramatically. By September, our mill expansion will be complete and we will be operating at 3,000 tonnes per day. At that time, Lake Shore Gold will make the jump from being a net investor of capital to being a company that generates net free cash flow at the current gold price.”

Lake Shore Gold is a gold mining company that is in production and pursuing rapid growth through the advancement of three wholly owned, multi-million ounce gold complexes in the Timmins Gold Camp. The Company is in production at both the Timmins West and Bell Creek mines, with material being delivered for processing to the Bell Creek Mill. A 50% expansion of the Company’s milling facility, to a capacity of 3,000 tonnes per day, is on track for completion during the third quarter of 2013. The Company also has a large portfolio of prospective projects and exploration properties to support continued growth well into the future.