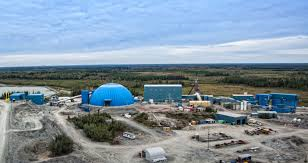 Lake Shore Gold Corp. (TSX:LSG) (NYSE MKT:LSG) is pleased to announce that it has closed its previously announced private placement of 12,900,000 flow-through common shares on a bought deal basis at a price of $1.17 per Flow-Through Share for gross proceeds of $15,093,000. The Offering was made pursuant to an underwriting agreement dated December 3, 2014 among the Company and a syndicate of underwriters led by TD Securities Inc., and which included National Bank Financial Inc., Haywood Securities Inc., and M Partners Inc.

The gross proceeds from the Offering will be used for general exploration expenditures, including investments to follow up on recent encouraging drill results at the Company’s 144 Target Area, including the 144 Gap Zone. The 144 Gap Zone is a new zone of gold mineralization identified west of Timmins, Ontario with minimum dimensions established to date of 100 metres along strike and 250 metres down dip. The expenditures to be funded from the Flow-Through Shares will constitute Canadian Exploration Expenditures as defined in the Income Tax Act (Canada).

The Flow-Through Shares issued in connection with the Offering are subject to a four month hold period in accordance with applicable Canadian securities laws.

Lake Shore Gold is a Canadian-based gold producer that is on track to produce at least 180,000 ounces of gold in 2014 from its wholly owned operations in the Timmins Gold Camp. The Company produces gold from two mines, Timmins West and Bell Creek, with material being delivered for processing to the Bell Creek Mill. In addition to current operations, the Company also has a number of highly prospective projects and exploration targets, all located in and around the Timmins Camp.