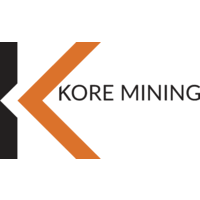 Due to the results to date, the Company is preparing to commence an extended drilling program to further delineate the existing resource and test on-strike and downdip extensions.

Eight large diameter oriented core drill holes for a total of 1,577 meters were completed in April 2020.  Assays from the first two holes are included in this news release. The remaining holes FG-20-370 to FG-20-375 (metallic screen assays pending) all intercepted zones of quartz veining, within the existing resource and newly identified quartz veins below the existing resource. The remaining holes assess both the “upper zone” and newly discovered “lower zone” in a similar manner as FG-368/69 assessed the section discussed in this release.

The full table of results are included below. Detailed core logs and photos are available at:

KORE CEO Scott Trebilcock commented, “Seeing high grade intercepts associated with visible gold in the core, validates our excitement about the FG Gold project. With the discovery in the Lower Zone, high core recovery to define structure and metallic screens upgrading assays, we are hitting all our objectives and will continue drilling after spring breakup later in June.”

The 20-kilometer trend is defined by gold in soils and geophysics that traces the mineralized rock group around the regional syncline. The Project has only been shallowly drilled where the mineralized rock group comes to surface. Past drilling averages only 93 meters deep into a low to moderately plunging sedimentary host rock. Mineralization is open at depth and along almost the entire trend. Figure 2 is a regional cross-section that shows the host rock potential at depth and connection to a potential porphyritic intrusion.

Due to coarse visible gold, metallic screening assays provide a much more representative sample versus conventional fire assays. Historical drilling and assays had limited and sporadic metallic screen analyses which may have underestimated historical gold grades.

Hole FG-20-369 was drilled as a scissor hole from the same pad and also encountered quartz veining and two incidences of coarse visible gold (see Figure 4). A cross section of the two holes is presented as Figure 3. FG-20-369 intercepted 13 quartz veins between 5.5 and 250 meters down-hole which tested an additional 100 meters below the previous resource. A total of ten quartz vein intercepts in FG-20-368 and FG-20-369 were encountered below the depth of historic drilling.

Holes 368 and 369 were started below the hanging wall of the “upper zone”. As additional holes are drilled in this section, they will be drilled through the entirety of the “upper zone” while exploring both the thickness of the “lower zone” and downdip extension of both zones.

As more assay data comes in KORE will be conducting structural analysis and interpretation.

Top 110 meters of assays previously released May 19, 2020 and set again below including the latest data:

Metallic screen assays are often used in exploration when coarse or visible gold is present in the core as we have here at the FG Gold Project. Traditionally, fire assays are undertaken on 30-50 grams of pulverised sample. The metallic screen fire assay uses a larger sample (1 kilogram in our case), with screening (to -106 micron) to separate coarse gold particles from fine material. After screening, two samples of the fine fraction are analysed using the traditional fire assay method. The fine fraction is expected to be reasonably homogenous. The entire coarse fraction is assayed to determine the contribution of the coarse gold. This method helps reduce the erratic assay results often seen in the higher-grade zones found in “nuggety” gold deposits such as the FG Gold Project. All assays are performed at accredited independent commercial assay labs.

The FG Gold property straddles the boundary between the Omineca and Intermontane tectonics belts of the Canadian Cordillera. The eastward emplacement of the Intermontane Belt onto the Omineca Belt along the Eureka Thrust Fault caused widespread regional metamorphism and structural deformation of both Belts. The regional scale, northwest trending, shallowly plunging, Eureka Syncline is the dominant resulting structure in the project area. Rocks in the core of the Eureka Syncline are comprised of basalt, augite porphyry flows, tuffs and volcanic breccias metamorphosed to a low grade; they are structurally emplaced onto metavolcanic and sedimentary rocks of the Quesnel Terrane. The Quesnel Terrane is recognized for its prevalence of copper, gold and molybdenum mines and showings such as those at Highland Valley, Boss Mountain, QR and Mount Polley.

The FG Gold property is centrally located over the Eureka Syncline, strategically encompassing two limbs and the hinge zone of a gold-bearing meta-sedimentary rock unit of the Quesnel Terrane. The gold-bearing rock, a ‘knotted’ phyllite, is the host rock for gold mineralization over the 3 km strike length of the Resource Area (see Figure 1). Surface mapping and geophysical inversion of airborne electromagnetic (EM) data suggests the knotted phyllite has a strike length of over 20 km with potentially thickened regions occurring in the Eureka Syncline hinge zone (Kusk Zone Target) (see Figure 1).

Gold mineralization occurs in and is associated with development of quartz – Fe carbonate – muscovite – pyrite vein stockwork. The stockwork is best developed in the knotted phyllite unit. Stockwork zones locally concentrate in zones greater than 10 meters wide and are dominantly stratabound. Fe-carbonate alteration and carbonate porphyroblasts development within the knotted phyllite unit is observed to extend well outside immediate areas of veining.

About the FG Gold Project

The FG Gold project consists of 35 claims, totaling 13,008 ha, in the eastern Cariboo region of central British Columbia, approximately 100 km east of Williams Lake. The project is at low elevation and accessible by forestry roads. FG Gold hosts an orogenic gold deposit on the northeast limb of the Eureka syncline. The southwest limb and hinge zone are underexplored. The Project also hosts copper-gold porphyry mineralization at the Nova Zone, discovered by KORE in 2018. Figure 1 highlights the 20km trend of host rock expression at surface.

The 20-kilometer trend is defined by gold in soils and geophysics that traces the mineralized rock group around the regional syncline. The Project has only been shallowly drilled where the mineralized rock group comes to surface. Past drilling averages only 93 meters deep into a steeply plunging sedimentary host rock. Mineralization is open at depth and along almost the entire trend. Figure 2 is a regional cross-section that shows the host rock potential at depth and potential connection to the Project’s porphyritic intrusion.

The previous drilling targeted stratigraphic controls on mineralization and did not penetrate into the bulk of the host-rock structure. Drilling was largely done with RC and narrow core to generate shallow bulk-disseminated gold intercept models. Within the current resource there appear to be mineralized corridors or chutes that are open at depth in the host rock.

The current resource at the FG Gold project is as follows:

KORE is 100% owner of a portfolio of advanced gold exploration and development assets in California and British Columbia. KORE is supported by strategic investors Eric Sprott and Macquarie Bank who, together with the management and Board own approximately 65% of the basic shares outstanding. 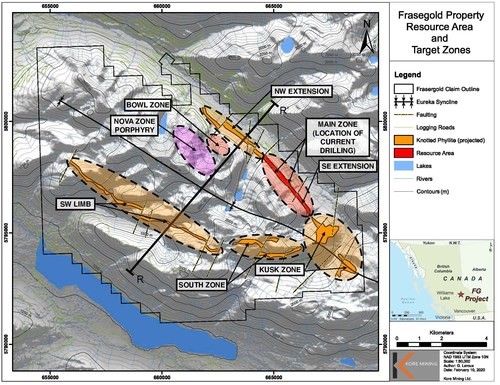 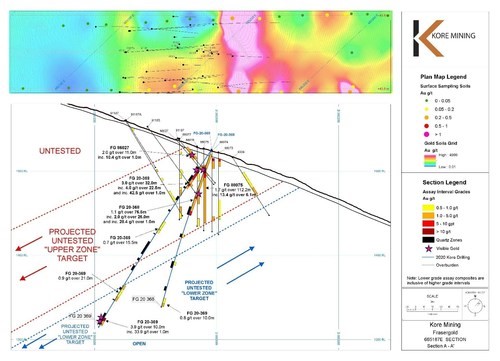