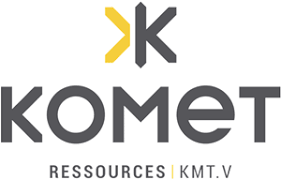 Komet Resources Inc.  (TSX-V : KMT) is pleased to announce it has acquired, through map staking, the Waconichi base metal property, located 40 km northeast of the mining town of Chibougamau in the northern part of the Abitibi greenstone belt, Eeyou Istchee, Quebec. The property comprises 260 map-staked claims covering a surface area of 14,297 hectares (143 sq. km) and is accessible by an all-season bush road from Chibougamau.

The property was acquired because it includes numerous historical base metal (Zn-Pb-Ag) showings and volcanic geology that is favorable for the discovery of volcanogenic massive sulfide (VMS) deposits.  The area was explored intermittently in the last 50 years and previous work outlined 18 surface showings of zinc-lead-silver or copper mineralization with reported values of up to 9% Zn+Pb in grab samples. Government records indicate a total of only 88 shallow (less than 200 m) historical drill holes on the entire property, mostly around surface showings, with no record of systematic exploration for VMS deposits. Numerous short intervals (less than 4 metres) grading from 0.75-3.1 % Zn were recorded. The property also includes numerous surface showings of massive to semi-massive pyrite, indicative of abundant volcanogenic exhalative activity.

A more recent (2014) airborne geophysical survey (MAG-TDEM) revealed over 180 conductor axes on the property, the longest being continuous for about 19,000 meters. The longest conductors correlate to near-surface graphitic and massive pyrite horizons (exhalative units) and include some of the base metal showings. The vast majority of conductors, however, remain untested by drilling.

Mr. Robert Wares, Chairman and interim President of Komet, commented, “We are very pleased to have successfully acquired the Waconichi property in the Chibougamau region of Quebec. Along with the recently announced option to acquire a majority interest Osisko Metals’ Brunswick Belt property, Komet is now well positioned to carry out exploration programs in areas that offer excellent potential for the discovery of polymetallic massive sulfide deposits in Eastern Canada”.

Komet is planning a fall prospecting program on Waconichi as well as an airborne gravity gradiometry survey that will validate locations of showings and allow for discrimination of portions of conductors that are associated with massive sulfides. Any significant anomalies will be tested with drilling in 2021.

Komet is a Montreal-based mineral exploration corporation listed on the TSX-V and was previously active in gold exploration and mining in West Africa. It has put its African assets for sale and is now focused on exploration and development of gold and base metal properties in Eastern Canada.

John Langton, P. Geo., of JPL GeoServices, is the independent Qualified Person who has approved the scientific and technical information contained in this news release.