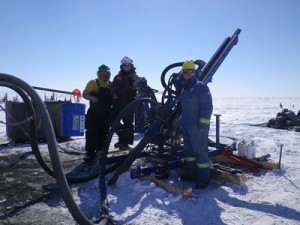 Kivalliq is fully funded to commence exploration at two of the Company’s 100% owned uranium projects in Canada. Work in 2015 will focus on:

A $1.5 million 2015 exploration program is planned at the 105,280 hectare (260,154 acre) Angilak Property in Nunavut Territory. The summer program will begin in June by mobilizing staff and supplies to the existing Nutaaq camp. Kivalliq plans to drill a minimum of 1000 metres in six to eight holes at Dipole in July, using one of three diamond drill rigs already on site. Ground geochemical surveying will run concurrently with the drill program, following-up on high priority targets identified during the 2014 season at Dipole and RIB.

“Our primary goal in 2015 is to discover a high grade, Lac 50-type uranium deposit in the Dipole-RIB Trend,” stated Jeff Ward, Kivalliq’s President. “Discovering a second significant mineralized trend in the southwest portion of Angilak would confirm our belief that this large property hosts an important uranium district in Nunavut.”

The Dipole-RIB Trend is located approximately 25 kilometres southwest of Lac 50, in a northeast trending belt of Archean metavolcanic rock interpreted to be equivalent to Lac 50 Trend resource host rocks. Based on corroborative geophysical and geochemical exploration, Dipole and RIB are excellent analogues to the Lac 50 deposit.

The RIB target, located four kilometres south of Dipole, was identified by Noranda Exploration Ltd. in 1976 as a one kilometre long basement conductor on the western margin of the Angikuni Basin unconformity. During 1977-78, 14 of 25 diamond drill holes intersected uranium mineralization at shallow depths (less than 35 metres), with the two best intercepts being 0.19% U3O8 over 9.3 metres (including 0.52% U3O8 over 2.6 metres) and 1.61% U3O8 over 0.7 metres. Exploration by Kivalliq in 2014 confirmed the RIB conductor using airborne Versatile Time Domain Electromagnetic (VTEM) geophysics. EL soil samples also outlined a corresponding 3.6 kilometre long uranium geochemical trend, demonstrating that historic work tested only a portion of the RIB target. Due to geological similarities with both Dipole and Lac 50, the RIB target warrants further evaluation in 2015.

Kivalliq will commence the Company’s first exploration program at the 13,711 hectare (33,881 acre) Hatchet Lake Property in June. This summer’s exploration will focus on multiple unconformity-related basement targets based on results from over $750,000 in previous exploration performed by Hathor Exploration Limited and Rio Tinto Canada Uranium Corporation (Rio Tinto). It is Kivalliq’s goal to advance targets to drill readiness through a combination of follow-up geochemical, biogeochemical and geophysical surveys covering several priority areas.

Hatchet Lake is located 39 kilometres along trend from Rio Tinto’s Roughrider deposit and within 29 kilometres of Cameco’s Eagle Point uranium mine. The Property was initially staked for its potential to host significant uranium, being situated on the Mudjatik-Wollaston transition zone and along strike from world class deposits such as McArthur River, Cigar Lake and Midwest Lake.

Previous exploration results by Pan Ocean Oil Ltd and Noranda Exploration Ltd referred to above are historical in nature and have not been verified by Kivalliq. However, Kivalliq believes these results are relevant because they are indicative of mineralized zones worthy of follow-up exploration since they are based on drilling and surface exploration carried out by what is believed to be knowledgeable explorers in accordance with acceptable industry practices at the time.

Kivalliq also holds a 100% interest in the 200,677 hectare Genesis Property located northeast of Saskatchewan’s Athabasca Basin, with Roughrider Exploration Limited funding the current exploration program pursuant to an option to acquire up to an 85% interest in the property. This highly prospective project is located along the Wollaston-Mudjatik trend and extends 90 kilometres northeast from the Athabasca Basin to the Manitoba border.