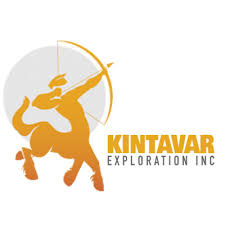 Kintavar Exploration Inc. (TSX-V: KTR), is very pleased to announce the results for 18 of 21 drill holes from its Wabash drilling program that was completed in December 2021. The drilling program targeted 10 distinct zones that were trenched in 2020 & 2021 and 15 out of the 18 holes that were received to date have intersected the targeted mineralization and other mineralization further down the hole. Highlights of the results can be seen in Figure 1 and Table 1.

The Southern polymetallic corridor that extends from Indiana to Lara returned the most significant results from this drilling program. The high-grade horizon intersected in hole WAB-21-21 returned 1.01% Cu and 19.3 g/t Ag over 16.8m including 1.26% Cu and 22.9 g/t Ag over 7.6m starting from 64.4m. Another horizon of 6.55m with 0.21% Cu and 11.0 g/t Ag including 0.36% Cu, 25.8 g/t Ag, 0.41% Pb and 0.39% Zn over 2.5m was intersected from 26.5m, corresponding to the Lara trench on surface and highlighting the polymetallic nature of this corridor. Based on the core angle of the stratigraphic units, the intersection represents approximately 70% of true width. The mineral galena has now been observed at both trenches and drill holes along this corridor, making it a “marker mineral”. The MLI corridor extends for over 1km and remains open to the NE and SW.

The entire corridor is made up of various mineralized horizons as can be observed from drill holes WAB-21-09, 10, 11, 20 and 21. The horizons vary in thickness from 1m to over 16m and even include gold in some, such as in hole WAB-21-10 with 0.47 g/t Au over 1.5m surrounded by other copper and silver horizons. See Table 1 and Figure 1 below for more details.

The GB1 corridor that has been associated with an important IP anomaly and returned the highest grades on the property to date (see press release from September 28, 2021), is another important target that was tested with this drilling program. The GB1 zone showed characteristics that differ from the stratiform sediment hosted mineralization typically observed on the property. The target mineralization was intersected in all 3 holes and appears to be expanding at depth and remains open to the north, south and at depth. Assays were partially received with some results still pending.

The Company has already begun the various permit applications for the next exploration program which will include:

“We are very pleased with this first drilling program on Wabash. We now have clear objectives moving forward and a much more focused exploration area. Instead of spreading our focus over the 8km extent of the soil anomaly like in 2021, we will be focusing on the 1+km of the Marco-Lara-Indiana corridor. We will have to further evaluate the GB1 corridor and its potential and to identify other zones on the property where similar mineralization could repeat. Although the low grade, bulk tonnage potential remains a model to be explored and defined in the long term, the discovery of this high-grade Lara mineralization confirms our original expectations and allows us to adjust our exploration efforts for the Wabash project accordingly.” commented Kiril Mugerman, President & CEO of Kintavar Exploration.

All samples have been sent and prepared (PREP-31) by ALS Global laboratory in Val-d’Or. Gold is analysed in Val d’Or using fire assay method (AU-AA25) with gravimetric finish (Au-GRA21) for samples higher than 0.5 ppm Au. For base metals and silver, the pulp was sent to ALS Global laboratory in Vancouver for multi-elemental analysis by four acid digestion (ME-ICP61) with ICP-AES finish. Samples with assays higher than 10,000 ppm Cu, Zn or Pb, or 100 ppm Ag were reanalyzed with over limits methods (CU-OG62, ZN-OG62, PB-OG62, or AG-OG62) at the ALS Global Vancouver laboratory. Quality controls include systematic addition of blank samples and certified copper standards to each batch of samples sent to the laboratory.

Alain Cayer, P.Geo., MSc., Vice-President Exploration of Kintavar, is Qualified Person under NI 43‐101 guidelines who supervised and approved the preparation of the technical information in this news release.

Kintavar Exploration is a Canadian mineral exploration Corporation engaged in the acquisition, assessment, exploration and development of gold and base metal mineral properties. Its flagship project is the Mitchi – Wabash copper-silver district (approx. 39 000 hectares, 100% owned) located 100 km north of the town of Mont-Laurier and 15 km East of the town of Parent in Quebec. Both properties cover an area of more than 300 km2 accessible by a network of logging and gravel roads with access to hydro-electric power already on site, major regional roads including railroad and a spur. The properties are located in the north-western portion of the central metasedimentary belt of the Grenville geological province. The projects primarily focus on sediment-hosted stratiform copper type mineralization (SSC) but include Iron Oxide Copper Gold and skarn type targets. Osisko holds a 2% NSR on 27 claims of the southern portion of the Mitchi property, outside of the sedimentary basin. Kintavar also has exposure in the gold greenstones of Quebec by advancing the Anik Gold Project in a partnership with IAMGOLD and several early-stage projects that were optioned by Gitennes Exploration.

Kintavar supports local development in the Mitchi-Wabash region where it owns and operates the Fer à Cheval outfitter (www.feracheval.ca), a profitable and cashflow generating operation where it employs local workforce. It as well works with local First Nations to provide training and employment.