Kinross Celebrates Opening of Dvoinoye Mine

Kinross Celebrates Opening of Dvoinoye Mine 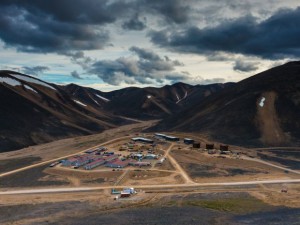 “I congratulate the Kinross team in Russia for delivering this important project on time and on budget, despite the challenges of a remote northern location and the difficult conditions facing the mining industry,” said Mr. Rollinson. “Dvoinoye is a low-cost mine which strongly reflects the Company’s focus on maximizing margins and cash flow at both our existing operations and growth projects.”

Dvoinoye is located approximately 100 kilometres north of Kinross’ Kupol mine. Its ore will be processed at the existing Kupol mill, providing additional, low-cost production. At peak production, Dvoinoye is expected to produce 1,000 tonnes of ore per day, which will be transported to Kupol via an all-season road. The Kupol mill has been expanded from 3,500 to 4,500 tonnes per day to process the additional Dvoinoye ore.

Dvoinoye is expected to produce between 235,000 and 300,000 of gold equivalent ounces annually during its first three full years of production, which will be incremental to gold production from the Kupol underground mine. The cost of sales for the combined Russian operations between 2014 and 2016 is forecast to be $545-$600 per gold equivalent ounce. Kinross will provide guidance for its 2014 production, cost of sales and all-in sustaining costs for its combined Russian operations and other regions in early 2014.

First ore from development activities at Dvoinoye was delivered to Kupol in Q2 2013 and commercial production began in early October. Total production in 2013 is expected to be approximately 25,000 gold equivalent ounces.

“Dvoinoye is the fourth mine Kinross has operated in Russia, which remains our lowest-cost jurisdiction and a core operating region for the Company,” said Mr. Rollinson. “The new mine is a testament to our continued success in the region and our strong partnerships with local communities, the indigenous people of Chukotka, and the regional and federal governments.”

“The opening of the Dvoinoye mine is an important milestone in the economic and social development of Chukotka. Our partners at Kinross have demonstrated over many years their commitment to responsible mining and we have every confidence that Dvoinoye will prove to be a successful project that will create jobs and prosperity in our communities,” said Chukotka Governor Roman V. Kopin.

As of December 31, 2012, Dvoinoye had proven and probable gold reserves of approximately 1.1 million gold equivalent ounces with an average gold grade of 17.8 grams per tonne.(1)

The Company’s ordinary course application to renew the Dvoinoye subsoil license was approved in September and extends until January 1, 2023.