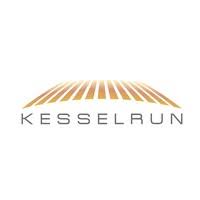 Continued drilling of the Huronian zone has been successful in confirming the continuity of the mineralized structure as well as proving its potential down plunge. In particular, hole 21HUR070, shown below, was drilled in the area of the mine where development ore reportedly averaged 78 g/t gold. Hole 21HUR070 intercepted a comparably high grade over a narrow width within a wider, three metre intercept of 13.6 g/t gold. Further drilling is planned down plunge of the workings and this intercept. 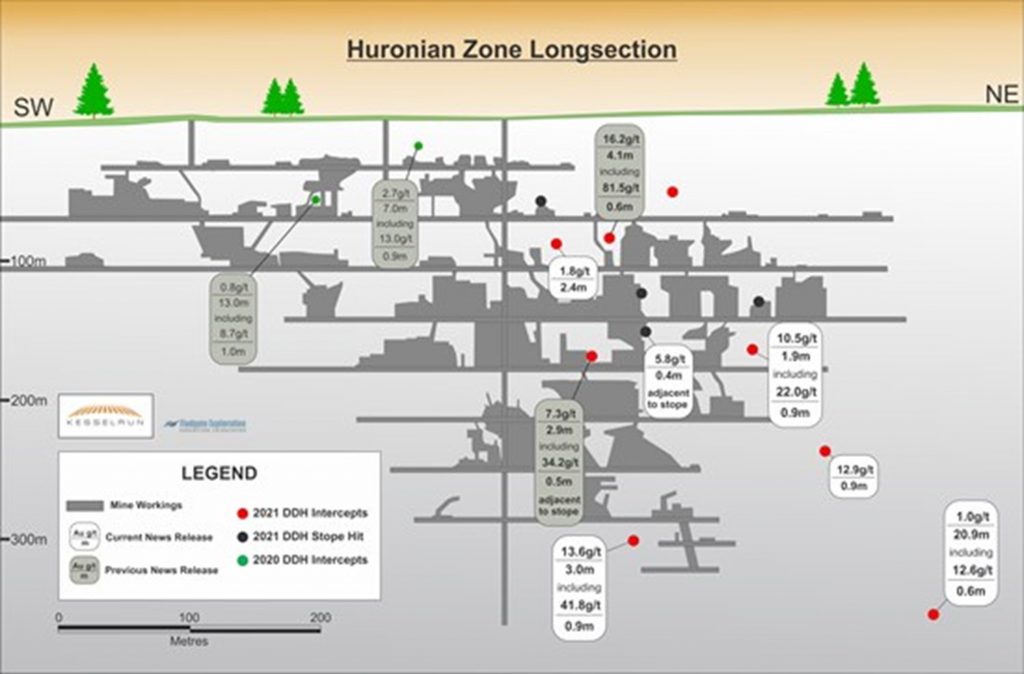 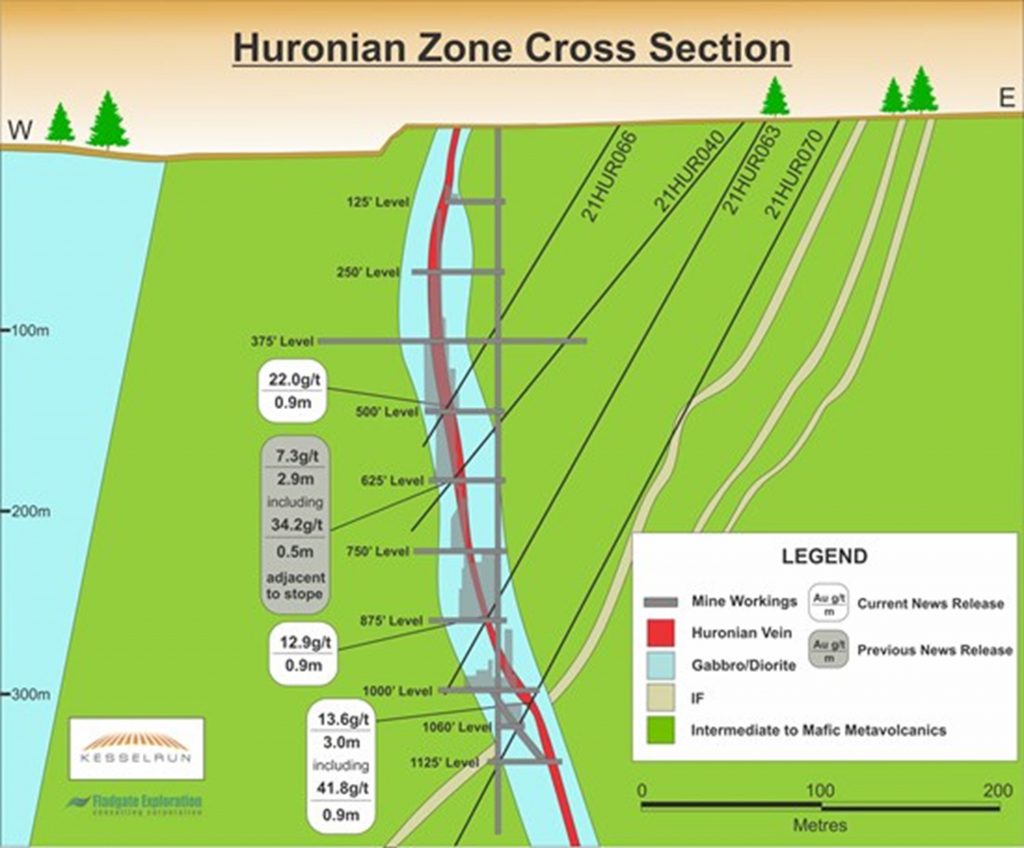 Michael Thompson, P.Geo., President and CEO of the Company, commented, “As we continue to drill the Huronian structure, we are getting an exciting first-hand look at what was mined nearly 100 years ago. We are now able to confidently and readily identify the gold bearing structures at Huronian which has helped us generate potential targets by applying these observations elsewhere on the property. This initial phase of drilling into the old mine has confirmed that the main zone is continuous for a considerable length and is still present where historic mining ended. It has also confirmed the presence of remnant mineralization in previously mined out areas as well as mineralized off-shoot structures at depth. In the next phase of drilling, we plan on testing the depth extents of the main structure and we will continue to explore the possibility of multiple ore shoots.”

The 2021 Huronian drill program is budgeted at 20,000 metres targeting the Fisher, Fisher North, McKellar and Huronian zones, all in close proximity along an approximate 1500 m strike length in the area of the historic Huronian Mine. The area also has tremendous potential for discovery of new wide zones of significant gold mineralization in light of the new revised mineralization model.

As of this news release approximately 12,000 metres has been drilled of which 6,250 metres of drilling results have been released. 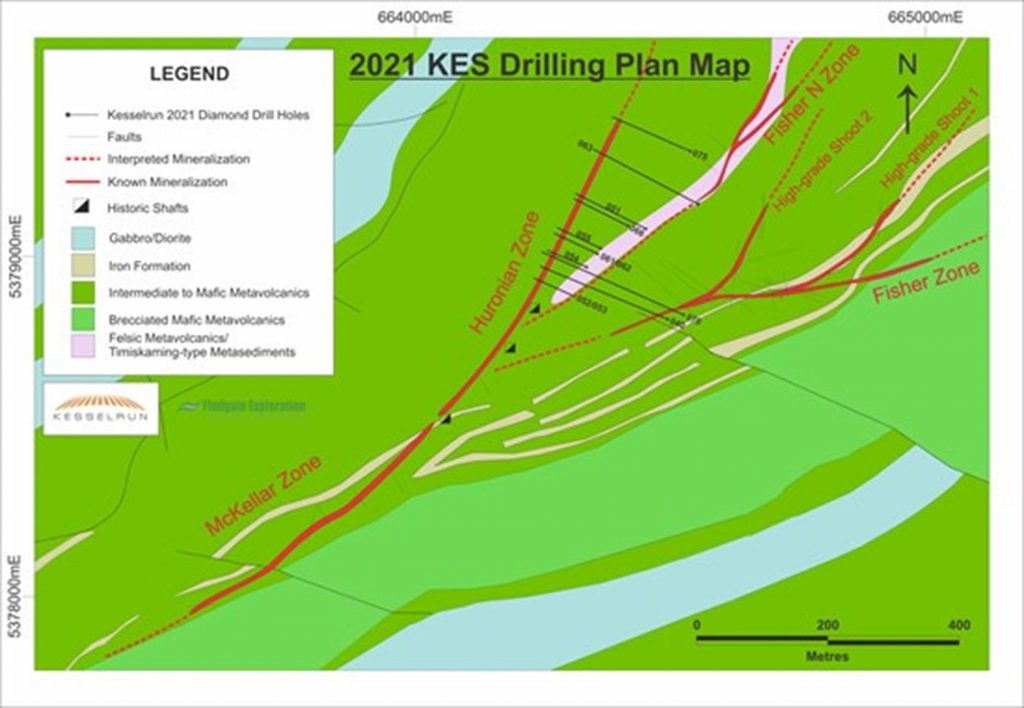 (1) Widths are drill indicated core length as insufficient drilling has been undertaken to determine true widths at this time on the Fisher and McKellar Zones. The Huronian Zone true widths are estimated to be 80% to 90% of the reported widths. Average grades are calculated with un-capped gold assays as insufficient drilling has been completed to determine capping levels for higher grade gold intercepts.

About the Huronian Gold Project

Michael Thompson, P.Geo., President and CEO of Kesselrun, is the Qualified Person responsible for the project as defined by National Instrument 43-101 and has approved the technical information in this news release.

Kesselrun has implemented a quality control program to comply with industry best practices for sampling, chain of custody and analyses. Certified gold reference standards, blanks and duplicates are inserted at the core processing site as part of the QA/QC program in addition to the control samples inserted by the lab. Samples are prepared and analyzed by Activation Laboratories in Thunder Bay. Samples are analyzed for gold using Fire Assay-AA techniques. Samples returning over 10 g/t gold are analyzed using Fire Assay-Gravimetric methods. Selected samples are also analyzed with a standard 1 kg metallic screen fire assay. All results reported herein have passed QA/QC protocols.