New Found Gold Corp.  (TSX-V: NFG) (OTC: NFGFF) is pleased to announce assay results from an interval drilled approximately 125m down plunge to the south of previously reported intervals at the Keats Zone, doubling the known extent of the high-grade gold mineralization at Keats.  This hole was drilled as part of the Company’s ongoing 200,000m diamond drill program at its 100%-owned Queensway Project, located on the Trans-Canada Highway 15 km west of Gander, Newfoundland.

Denis Laviolette, President of New Found, stated: “We are excited by the expanding footprint of high-grade gold mineralization at Keats, confirmed by partial assay results for 26 holes to date and the logging and interpretation of vein intervals in an additional 34 holes. To date the zone is interpreted to be at least 250m in the down plunge direction, appears to have a vertical extent of at least 140m, with estimated true widths typically in the 10m range and up to 30m+. High-grade gold mineralization is open down plunge and vertically, and step-out and infill drilling is continuing.

Our growing understanding at Keats and Lotto is adding to our excitement about the potential for the broader Appleton and JPB corridors. The odds of us drilling into the two best economic accumulations of gold on the project 2km apart with our first drillholes seems highly improbable. Ramping up to eight drills will allow us to both continue infill and step out drilling at Keats and Lotto, and to test multiple high-grade targets along 20km of prospective strike at Queensway North. Overall, we are working with over 100km of prospective strike within a 1,500km2 project, and we believe New Found is just scratching the surface of this district scale property.” 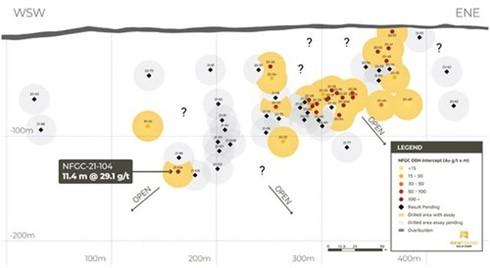 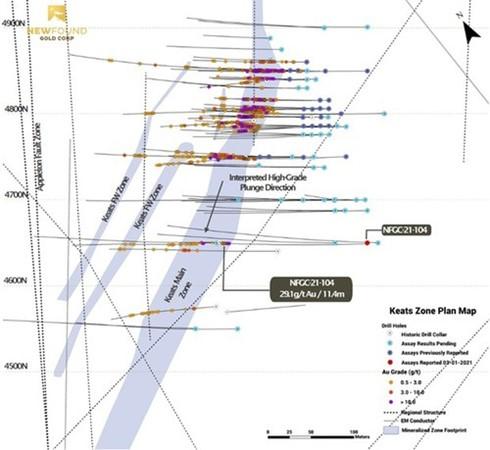 Keats continues to deliver robust widths of vein hosted gold mineralization with substantial visible gold in quartz vein networks. Grades are moderately variable, consistent with most orogenic gold systems. The 250m down plunge dimension noted in this release is measured from the furthest north high-grade interval reported to date (hole NFGC-20-37, 10.3m at 25g/t Au starting at 9.0 m down hole, see Company’s February 11, 2021 news release) to the interval of 11.4m at 29.1 g/t Au reported for hole NFGC-21-104 in this release. The Company has dedicated three drill rigs for ongoing drilling at Keats that will continue infill drilling and to test the zone in both the horizontal and vertical directions, including to the south of NFGC-21-104.

New Found has recently completed down-hole 3D optical and acoustic televiewer measurements and is now processing this data to obtain precise interpretation of faulting, folding and vein interactions. Over the next few months the interpretations from this work will be merged with 3D EM, gravity, and magnetic data-inversions to characterize specific geological conditions present at Keats, Lotto and other showings that correlate to gold mineralization. Signatures developed in this work will be utilized in the targeting of potential new zones of gold mineralization along the Appleton and JBP fault zones.

Keats, Lotto, Knob, Dome, Road, and other zones represent the product of a very sparse preliminary patchwork of historical greenfields exploration programs. New Found has been fortunate to generate impressive drill results starting with its very first hole at Keats.  Broader systematic testing recently resulted in the discovery of high-grade gold mineralization at Lotto (see the Company’s February 23, 2021 news release), where 41.2g/t Au over 4.75m and 25.4g/t over 5.15 m was intercepted in hole NFGC-20-17, the Company’s first hole targeting the Lotto Zone.

Keats and Lotto cover a very small footprint on extensive prospective trends along the Appleton and JBP faults, and New Found Gold believes there is vast discovery potential along these trends.  As a first step to more comprehensively testing these trends, the Company is pleased to announce the commencement of a systematic plan that will see approximately 20km of strike length along the Appleton and JBP faults tested with first pass reconnaissance drill hole fences.  This drilling will be guided by vectoring methods developed from a large volume of geological information, and vectoring methods developed based on the success to date on Queensway North.

The Appleton and JBP have been subdivided into named blocks shown in Figure 3. Many of these blocks are undrilled to date.

New Found is also continuing work on over 70km of strike of the Appleton and JBP faults on Queensway South (Figure 4).  Six gold in till anomalies have been defined through a large-scale gold in till survey, including a number that are coincident with the Appleton and JBP structures (Figure 4). Field work in 2021 will continue towards developing additional drill targets on Queensway South. 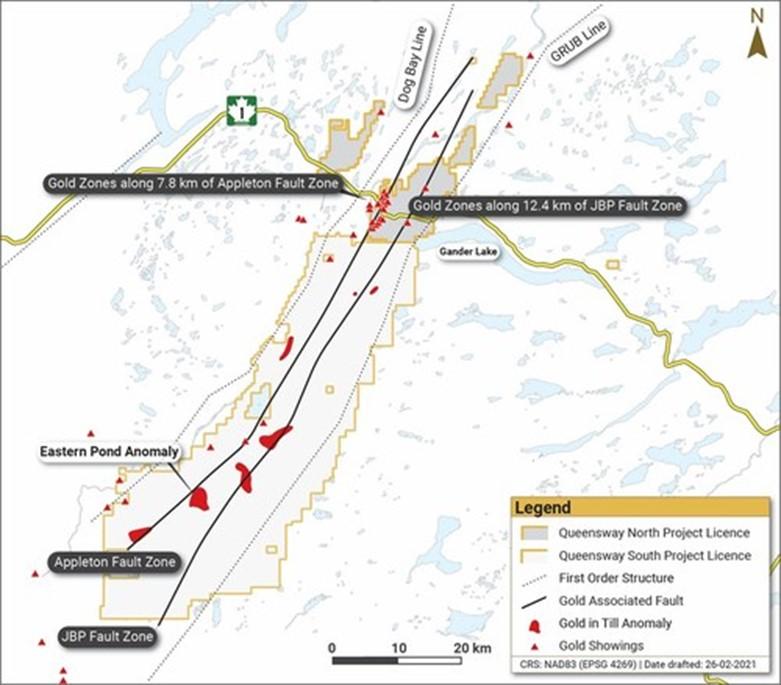 Table 2: Summary of results reported in this news release.

Table 3: Details of drill holes reported on in this news release.

True widths of the new exploration intercepts reported in this press release have yet to be determined but are estimated to be 70% to 80% of reported core lengths. Assays are uncut, and calculated intervals are reported over a minimum length of 2 meters using a lower cut-off of 1.0 g/t Au. All HQ split core assays reported were obtained by either complete sample metallic screen/fire assay or standard 30-gram fire-assaying with ICP finish at ALS Minerals in Vancouver, British Columbia or by entire sample screened metallic screen fire assay at Eastern Analytical in Springdale, Newfoundland. The complete sample metallic screen assay method is selected by the geologist when samples contain coarse gold or any samples displaying gold initial fire assay values greater than 1.0 g/t Au. Drill program design, Quality Assurance/Quality Control and interpretation of results is performed by qualified persons employing a Quality Assurance/Quality Control program consistent with National Instrument 43-101 and industry best practices. Standards and blanks are included with every 20 samples for Quality Assurance/Quality Control purposes by the Company as well as the lab. Approximately 5% of sample pulps are sent to secondary laboratories for check assays.

The technical content disclosed in this press release was reviewed and approved by Greg Matheson, P. Geo., Chief Operating Officer and a Qualified Person as defined under National Instrument 43-101. Mr Matheson consents to the publication of this announcement dated March 1, 2021 by New Found Gold. Mr Matheson certifies that this announcement fairly and accurately represents the information for which he is responsible.

New Found holds a 100% interest in the Queensway Project, located 15 km west of Gander, Newfoundland, and just 18 km from Gander International Airport. The project is intersected by the Trans-Canada Highway and has logging roads crosscutting the project, high voltage electric power lines running through the project area, and easy access to a highly skilled workforce. With working capital of approximately C$70M the Company is well financed to continue its current 200,000-m drill program, with a planned increase from the current five drill rigs to eight drill rigs in Q1, 2021. New Found has a proven capital markets and mining team with major shareholders including Palisades Goldcorp (33%), Eric Sprott (18%), Novo Resources (11%), Rob McEwen (7%), other institutional ownership (8%), and management, directors, and insiders (4%).