Karora Resources Drills 6.5% Nickel over 11.9 metres in New 4C Offset Discovery Located Only 25 Metres from Existing Mining Infrastructure at the Beta Hunt Mine

Karora Resources Drills 6.5% Nickel over 11.9 metres in New 4C Offset Discovery Located Only 25 Metres from Existing Mining Infrastructure at the Beta Hunt Mine

Karora Resources Inc. (TSX: KRR) (OTCQX: KRRGF) is pleased to announce a new nickel discovery and positive results from its ongoing nickel drill program. In the Hunt Block above Western Flanks, infill drilling of the existing gold Mineral Resource intersected high grade nickel mineralization in two holes above the gold Mineral Resource. This mineralization, interpreted as an offset to the 4C nickel trough mined by Reliance Mining in 2004/05, is only 25 metres from existing development actively used for mining of the Western Flanks gold deposit. Positive results were also received from drilling which is focused on upgrading and extending the 30C and 25C (south of the 30C) Mineral Resources. In a target zone parallel to Western Flanks, Stage 1 of the 44C drill program intersected nickel sulphides on and proximal to the ultramafic/basalt contact indicating potential for a repeat of the 40C trough, north of the Alpha Island Fault in the Hunt Block. Highlights from the recent drill results are listed below1.

Results support the extension of the current nickel Mineral Resource and provide for short term mining opportunities to replace some of the current remnant mining as the Company builds towards increased nickel production in 2024 based on the results of the recently released Nickel PEA (see Karora news release dated August 12, 2022).

Paul Andre Huet, Chairman & CEO, commented: “I am encouraged by the latest set of nickel drill results from both the 4C Offset nickel trough and the 44C target. The 4C Offset is located above the Western Flanks gold Mineral Resource and just 25 metres from the extensive existing Western Flanks mining infrastructure. This discovery is particularly exciting and significant because it represents a potential new high grade nickel zone that we can potentially mine in the near term. Additionally, the latest Beta Block drill results from the 30C and 25C nickel troughs reinforce the upside potential for Mineral Resource extensions and upgrades as outlined in the nickel PEA we announced last month for Beta Hunt. We expect ongoing drilling in the Hunt, Beta and Gamma Blocks to continue to demonstrate the significant potential Mineral Resource additions outside of the zones on which the PEA is based. Today’s results also highlight the potential to identify new channels of nickel mineralization amenable to mining in the short term to accelerate the shift away from our current practice of remnant mining in historic nickel stopes. Encountering nickel intercepts such as 5.1% over 3.3 metres and 4.6% over 1.3 metres certainly highlight the exciting potential that we are seeing as we execute our drill program.”

From February 1, 2022 to July 31, 2022, a total of 37 nickel resource definition and exploration holes were drilled at Beta Hunt for 4,121 metres. Drilling was conducted in the Beta and Hunt Blocks. Beta Block drilling was focused on upgrading and extending the 30C and 25C (south of the 30C) Mineral Resources with the aim of identifying intact nickel mineralization channels as short term mining opportunities to accelerate the planned shift to focus more on new production areas as outlined in our recently announced nickel PEA for Beta Hunt (see Karora news release dated August 12, 2022). Currently, nickel production is focused on remnant mineralization from historic nickel stopes which carries a higher cost of mining. Hunt Block drilling tested the existence of the 44C nickel trough parallel to and west of Western Flanks. The 4C offset was discovered as part of an infill drilling program of the existing Western Flanks gold Mineral Resource close to the ultramafic/basalt contact.

4C Offset: Infill drilling at the top of the Western Flanks gold Mineral Resource at the south end of the deposit intersected high grade, contact-related, nickel sulphide mineralization in two holes drilled 30 metres apart along strike. The mineralization is interpreted to be the offset extension of the 4C nickel deposit previously mined by Reliance in 2004/05. Significantly, these intersections are located only 25 metres from existing development. Significant intersections1.from these two holes are highlighted below:

The intersection in drill hole BW-1704-07AG (6.5% Ni over 11.9 metres) comprises four layers of massive sulphide mineralization, up to 2.5 metres thick, interbedded with both matrix and disseminated sulphide layers. The multiple massive sulphide layers indicate this intersection to represent stacked repeats of the same massive layer, though no visual evidence of thrusting to produce the repeats was observed in the drill core. Follow-up infill and extensional drilling is in progress to better define the geometry and extent of this new discovery.

44C:  This nickel target is the interpreted northern offset extension to the 40C trough (Beta Block) and is located 140 metres west of the Western Flanks gold deposit. Stage 1 drilling of the 44C was recently completed with nickel sulphides intersected in seven of eleven holes, on and proximal to the ultramafic/basalt contact.  Assay results are pending.

The drill core observation of contact-related nickel mineralization supports the potential of a repeat of the 40C nickel trough, west of Western Flanks in the Hunt Block.

The Beta block drill program was successful in both upgrading and extending the existing resources as highlighted by the significant results listed below:

The drill results will be incorporated into an updated nickel Mineral Resource to provide improved mining options as nickel production builds towards increased production in 2024 based on the results of the recently released Nickel PEA.

Karora continues to drill test for new nickel troughs encouraged by recent successes. Exploration drilling planned for the remainder of 2022 will include follow-up drilling to infill and extend mineralization intersected in the new 4C offset and 44C targets plus testing the 90C target (see Karora news release, Aug 12, 2022). The 90C is the interpreted offset extension to the Beta West mine area. This target is supported by a coincident trough/sulphide reflector on the ultramafic/basalt contact interpreted from the 3-Dimensional seismic study completed by previous owner, Consolidated Minerals in 2008. The 90C drilling is a co-funded program with the Western Australian State Government under their Exploration Incentive Scheme (EIS).

Drilling for extensions along strike of the 50C is planned for 2023 once the BRI development drive is extended by a further 300 metres, due to be completed by Q1 2023. The extended BRI will provide drill access to undertake both resource definition and extensional/exploration drilling.

At Beta Hunt all drill core sampling is conducted by Karora personnel. Samples for gold analysis are shipped to SGS Mineral Services of Kalgoorlie for preparation and assaying by 50 gram fire assay analytical method. All gold diamond drilling samples submitted for assay include at least one blank and one Certified Reference Material (“CRM”) per batch, plus one CRM or blank every 20 samples. In samples with observed visible gold mineralization, a coarse blank is inserted after the visible gold mineralization to serve as both a coarse flush to prevent contamination of subsequent samples and a test for gold smearing from one sample to the next which may have resulted from inadequate cleaning of the crusher and pulveriser. The lab is also required to undertake a minimum of 1 in 20 wet screens on pulverised samples to ensure a minimum 90% passing at -75µm. Samples for nickel analysis are shipped to SGS Australia Mineral Services of Kalgoorlie for preparation. Pulps are then shipped to Perth for assaying. The analytical technique is ICP41Q, a four acid digest ICP-AES package. Assays recorded above the upper detection limit (25,000ppm Ni) are re-analyzed using the same technique with a greater dilution (ICP43B). All samples submitted for nickel assay include at least one Certified Reference Material (CRM) per batch, with a minimum of one CRM per 20 samples. Where problems have been identified in QAQC checks,

Karora personnel and the SGS laboratory staff have actively pursued and corrected the issues as standard procedure.

Karora is focused on increasing gold production to a targeted range of 185,000-205,000 ounces by 2024 at its integrated Beta Hunt Gold Mine and Higginsville Gold Operations in Western Australia. The Higginsville treatment facility is a low-cost 1.6 Mtpa processing plant, which is fed at capacity from Karora’s underground Beta Hunt mine and Higginsville mines. Karora recently acquired the 1.0 Mtpa Lakewood Mill in Western Australia. At Beta Hunt, a robust gold Mineral Resource and Reserve are hosted in multiple gold shears, with gold intersections along a 4 km strike length remaining open in multiple directions. HGO has a substantial Mineral gold Resource and Reserve and prospective land package totaling approximately 1,900 square kilometers. The Corporation also owns the high grade Spargos Reward project, which came into production in 2021. Karora has a strong Board and management team focused on delivering shareholder value and responsible mining, as demonstrated by Karora’s commitment to reducing emissions across its operations. 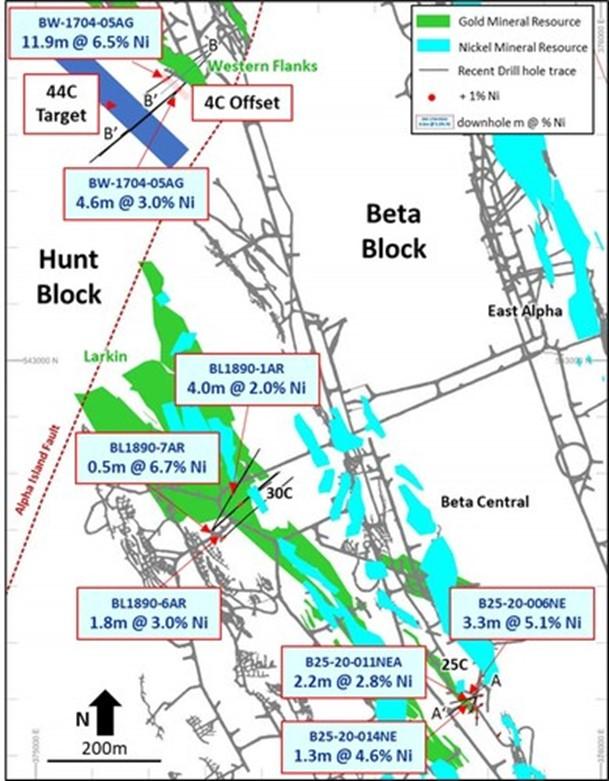 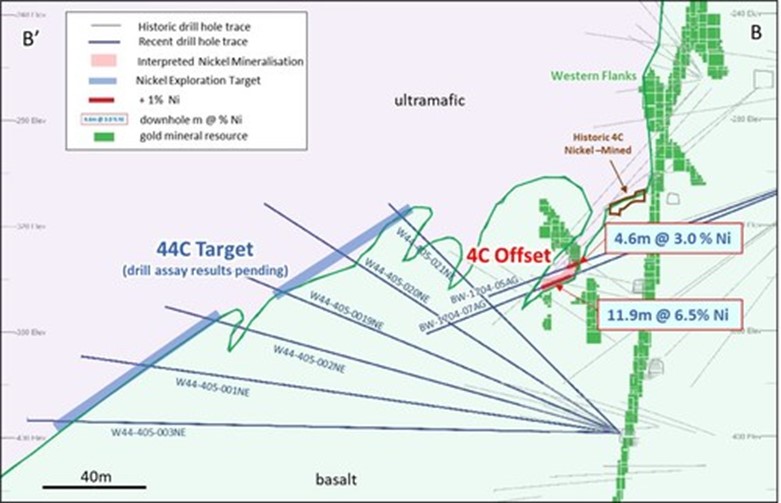 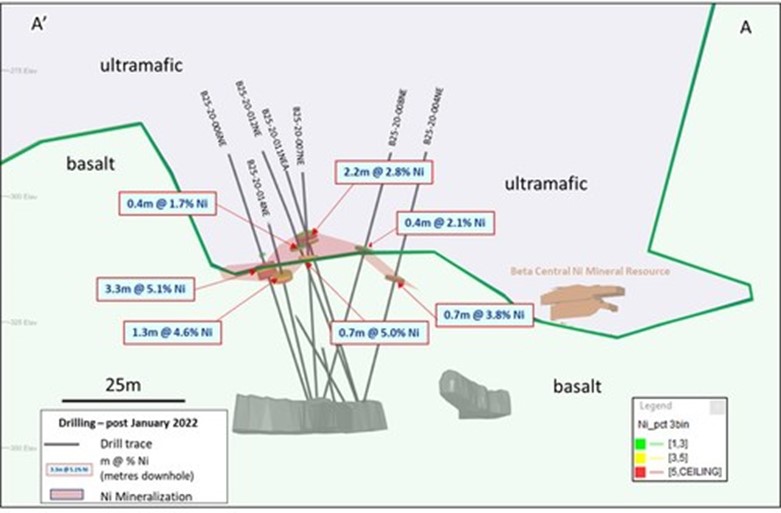