Karora Resources Inc. (TSX: KRR) is pleased to announce encouraging Phase 1 drill results from initial scout drilling on its under-explored Lake Cowan (dry salt lake bed) area of Higginsville Greater. The targeted area has seen little historic exploration and is situated over prospective ground which covers the eastern margin of the Kalgoorlie Terrane. The area contains several of the main regional faults and has similar geology to many of the major gold deposits within the Kalgoorlie-Kambalda-Norseman area. Lake Cowan represents a high priority exploration area for Karora in 2021 as part of its large A$20 million drilling and exploration budget.

Paul Huet, Chairman and CEO of Karora said, “Initial scout drilling results from our Lake Cowan prospect, which is part of the Higginsville Greater exploration area, have been particularly promising. All of the results are located at relatively shallow depths, including some particularly strong, and potentially open pittable, gold intercepts such as 1.35g/t over 50 metres which includes a very robust intercept of 3.64g/t over 16 metres in hole HIGA8864. These are excellent results for first pass aircore drilling and confirm the strong exploration potential of the Lake Cowan area.

While we have experienced delays in the return of lab assays from across our properties given very high regional demand and COVID-19 related labour shortages, we look forward to ongoing results from this exciting greenfields program. To date, I am extremely pleased with the results returned from the drill bit which have very successfully vectored in on the targets generated by our large 400 square kilometre gravity survey completed last year.”

Karora is also pleased to announce that Paul Andre Huet, Chairman and CEO, will be relocating to Western Australia in the first half of 2021 to lead Karora’s near term organic growth initiatives alongside Graeme Sloan, Managing Director Australian Operations. With Karora’s focus on organic growth at its Australian gold operations over the near-to-mid-term, the Corporation intends to take full advantage of Mr. Huet’s proven leadership and mining operations experience to oversee Karora’s growth in Western Australia alongside Mr. Sloan. Karora expects to outline its organic growth plan to the market in the coming months.

Oliver Turner has been promoted to the position of Executive Vice President, Corporate Development and will continue to be based in Toronto, Canada. Mr. Turner will continue to oversee strategic corporate initiatives and will provide senior leadership to support Karora’s TSX listing and capital markets relationships in North America.

Paul Huet, Chairman and CEO of Karora said, “Since acquiring and integrating the Higginsville Gold Operations in mid-2019, we have been diligently focused on the transformation of Karora into a stable junior gold producer with a robust mineral inventory. Our initiatives have included significant cost reductions, the major reduction of royalties across our properties and the transformation of our executive team, all of which have attracted some of the strongest shareholders in the industry.

With our sights now set on delivering a strong organic growth profile to our investors and stakeholders, it is important that we leverage our significant collective experience in operations to execute our strategy to grow the business. As such, I am very much looking forward to working alongside our tremendous team in Australia to deliver our vision for our shareholders. Karora has built a very strong shareholder base in North America and Europe and remains focused on continuing to support and expand its market presence globally.

In North America, Oliver Turner has been a critical component to the outstanding corporate transformation we achieved in 2020 and I am extremely pleased to announce his promotion to Executive Vice President of Corporate Development. Together as a team we are looking forward to continuing to expand awareness of our business across both sides of the Pacific and Europe while continuing to attract top tier shareholders to Karora. We are looking forward to further growth in 2021.”

Additionally, Karora is pleased to announce its participation in the upcoming investor conferences.

The desktop study covered large areas of the Zuleika shear zone and the western margin of the Boulder Lefroy shear zone. The Zuleika shear zone is a regional structure that, along with subsidiary faults, controls the bulk of the Higginsville Central deposits (2Mozs), extending 55 kilometres north to Cave Rocks (0.5Mozs), 70 kilometres north to Mount Marion (1Mozs) and 110 kilometres north to Kundana (6Mozs)3. The Zuleika shear zone extends south over Lake Cowan and is a key target as part of Karora’s first test of this under-explored area. The Baloo mine and the Monsoon/Nanook prospects (see Karora Technical Report dated February 6, 2020, www.sedar.com) are interpreted as belonging to the southern extension of the Zuleika Shear. The Boulder Lefroy shear zone is interpreted to extend into the eastern edge of the Higginsville leases and is host to the world class St Ives gold mine, 50 kilometres to the north. St Ives has produced over 14Mozs since 1980. The current scout drilling program will test part of the western margin of this prolific Shear Zone.

A total of 15,339 metres and 288 holes of the Phase 1 aircore drilling program were completed to January 1st, 2021. Holes are drilled vertically and to refusal with a maximum depth capacity of approximately 120 metres. Assay results have been returned for 192 holes to January 18, 2021 with turn-around times on assay results impacted by industry-wide laboratory capacity issues as a result of an increasing demand on assay lab services and labour supply hurdles related to COVID-19 restrictions.

Results from the reconnaissance program received to date are very encouraging with 36 holes returning assays above 0.02 g/t gold – an assay grade considered anomalous and prospective in this environment. Highlighted significant gold drilling results4 are described below:

Drilling is ongoing, with the Phase 1 program expected to be completed during March 2021. Planning for follow-up drilling (both aircore and RC) on the basis of the Phase 1 drilling results has commenced.

At Higginsville All RC drill sampling is conducted by Karora personnel. Samples for gold analysis are shipped to Bureau Veritas Laboratories of Kalgoorlie and Perth for preparation and assaying by 40 gram fire assay analytical method. All drilling samples submitted for assay include Certified Reference Material and coarse blank every 25th down hole metre. Duplicate samples are taken every 50th metre. The lab is also required to undertake a minimum of 1 in 45 wet screens on pulverised samples to ensure a minimum 90% passing at -75µm. Samples for low level gold (current aircore drill program) are shipped to Bureau Veritas Laboratories, Perth for preparation and assaying by 40 gram Aqua Regia Digest, with ICP-MS finish with a detection limit of 1 ppb Au. Aircore samples are presented to the laboratory as 4m composite samples. Where problems have been identified in QA/QC checks, Karora personnel and the Bureau Veritas laboratory staff have actively pursued and corrected the issues as standard procedure.

Karora is focused on growing gold production and reducing costs at its integrated Beta Hunt Gold Mine and Higginsville Gold Operations in Western Australia. The Higginsville treatment facility is a low-cost 1.4 Mtpa processing plant which is fed at capacity from Karora’s underground Beta Hunt mine and open pit Higginsville mine. At Beta Hunt, a robust gold Mineral Resource and Reserve is hosted in multiple gold shears, with gold intersections along a 4 km strike length remaining open in multiple directions. HGO has a substantial Mineral gold Resource and Reserve and prospective land package totaling approximately 1,900 square kilometers. The Company also owns the high grade Spargos Reward project which is anticipated to begin mining in 2021. Karora has a strong Board and management team focused on delivering shareholder value. Karora’s common shares trade on the TSX. Karora shares also trade on the OTCQX market. 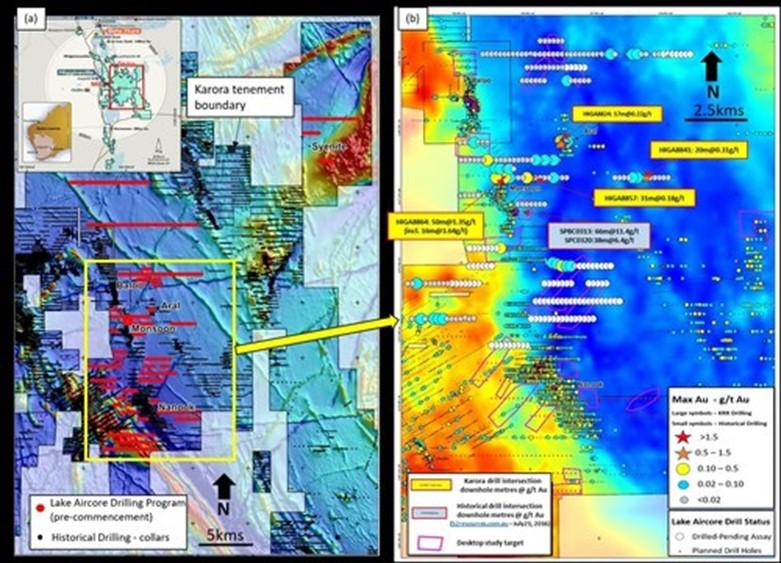