Karora Resources Inc. (TSX: KRR) is pleased to announce additional drilling from the Larkin Zone discovery at its Beta Hunt Mine has extended the strike length of the new zone to over 1,000 metres just one year after initial discovery. The rapid extension of the zone is a direct result of the significant infrastructure already in place allowing Karora to drill from optimal locations without requiring extensive additional underground development. The initial phase of drilling at Larkin is now complete and the maiden resource for the Larkin Zone will be included in Karora’s 2021 consolidated mineral resource update expected in early 2022.

Paul Huet, Chairman and CEO of Karora said, “As expected, continued strong recent drill results from the Larkin gold discovery have significantly extended the interpreted strike length to over 1,000 metres and to a depth of up to 150 metres below the ultramafic / basalt contact zone. This rapid strike and depth expansion follows the drilling success reported earlier this year which previously extended Larkin over a strike of 650 metres and up to 120 metres down dip (see Karora news release dated May 12, 2021). Importantly, the Larkin zone remains open for further extension both along strike and at depth. Newly reported results from Larkin included intercepts of 9.4 g/t over 11.0 metres (hole BL19-09AR), 20.5 g/t over 3.5 metres (hole EL-EA2-011AR) and 15.2 g/t over 1.6 metres (hole BL19-23AR).

In addition to the encouraging Larkin and Western Flanks North and South infill results, I am particularly pleased with the initial extensional drill results from surface in the A Zone North zone, which has confirmed the presence of gold mineralization 300 metres from the margin of the existing resource with a result of 4.7 g/t over 2.0 metres, including 9.3 g/t over 1.0 metres. Planning for additional drilling to test the continuity of this mineralization is underway. As highlighted in our growth plan, our planned second decline at Beta Hunt will provide the potential to access this gold mineralization very early in the development with the opportunity to provide gold revenue at an early stage of the mine expansion program.

On the nickel front, drilling is underway at the 50C Nickel Trough discovery where we previously reported strong initial results, including 11.6% Ni over 4.6 metres, including 18.4% Ni over 2.2 metres (Karora news release dated April 6, 2021). Assay results are pending on the new drilling, however, contact related nickel sulphides were observed in all 11 of the new holes completed and following up drilling is ongoing.

Overall, drilling results at Beta Hunt continue to deliver robust, continuous extensions to our major mineralized shear zones which positions us well for our 2021 Reserve and Resource update. I am particularly pleased that our team was able to complete the initial phase of our aggressive Larkin drill program, overcoming the well-known challenges with respect to the tight labour market and COVID-19 related restrictions in Western Australia, both of which have significantly increased assay turn around times at third party labs. We look forward to delivering pending results as they become available across several exciting targets and extensions at our flagship underground operation.”

Drilling to date has focused on extending and upgrading (infill drilling) the Western Flanks, A Zone and Larkin Zone. Nickel drilling was directed at following up the 50C Gamma Zone discovery intersection of 11.6% Ni over 4.6 m (KRR news release, April 6, 2021) and infilling the 30C Mineral Resource.

The current phase of drilling in the Larkin Zone was completed in July 2021, totalling 123 holes for 16,207 metres with new assay results recently returned. The drill program continued to test the southern extension of Larkin which has now been drilled over 1,000 metres of strike and up to 150 metres below the nickel contact. The zone remains open both along strike and at depth.

Since Karora’s previous update on the Larkin Zone (see Karora news release, May 12, 2021), assay results have been received for an additional 24 holes with significant results1.detailed below:

The BL series of holes were designed to infill previously reported drill results between the 40 Access drill cuddy and the 2460 access to the south. Recent results continue to support the preliminary interpretation of the Larkin Zone comprising two to three, steep dipping, mineralized zones (Figure 2) of varying widths (3 metres to 12 metres) with mineralization associated with biotite-albite-pyrite altered steep-dipping shear zones and narrow, extensional quartz veins, similar in style to the A Zone and Western Flanks deposits.

A Zone North drilling totalled 27 holes for 4,473 metres targeted to upgrade and extend the Inferred Mineral Resource along the northern margin of the existing A Zone Mineral Resource. Results show gold mineralization extends over 150 metres down-dip of the existing mineral resource. Drilling is also supportive of a continuation of the A Zone resource along strike to the north resulting in potential for both up-dip and down dip extensions (Figure 3). The most northern drill hole drilled in this campaign, drill hole AA1380-040E, intersected 6.9 metres @ 4.6g/t.

Assay results from the A Zone North drilling are highlighted below:

Western Flanks North drilling totalled seven holes and 748 metres. Drilling targeted the northern margin of the Resource with the aim of upgrading the Mineral Resource to Indicated status. Results highlighted below are supportive of the existing resource model:

Initial surface exploration drilling was undertaken to test the near surface potential for both the Western Flanks and A Zone to continue north along strike from the current underground resources. The surface target area was the focus of nickel exploration by WMC in the 1970s and 1980s who undertook limited shallow drilling targeting the basalt/ultramafic nickel contact. The previous work presented Karora the opportunity to test for gold mineralization with surface drilling up to a 700 metre strike distance from existing resources. Drilling included both RC and diamond drilling and totalled 9 holes for 2,765 metres.

Drilling targeted the interpreted extensions of both the Western Flanks and A Zone at variable depths to a maximum of 500 metres below surface. Geological observations from logging the RC chips and diamond core show very strong shearing up to 40 metres wide. The strong shearing is along strike of Western Flanks and is dominated by biotite-sericite-pyrite alteration with minor quartz veining. The interpreted A Zone extensional position is associated with a number of weak to moderate shear zones with minimal quartz veining.

First pass assay results support Karora’s geological theory, intersecting gold mineralization associated with the interpreted Western Flanks shear zone 700 metres north along strike from the margin of the existing resource. The interpreted A Zone position, located 300 metres north along strike of the existing resource also provides encouragement for further work with a best intersection of 4.7 g/t over 2 metres, including 9.3 g/t over 1.0 metres in drill hole AZ_m182RC_04AE.

Highlighted intersections from the surface drilling program are shown below:

30C: Infill drilling continued to upgrade and extend the 30C nickel trough. A total of fourteen holes for 812 metres was completed over the reporting period. Significant results from the recent drilling campaign are listed below:

Gamma Zone/50C: Drilling commenced testing the potential of the interpreted 50C nickel trough as a follow-up to the discovery hole, G50-22-005E which intersected 11.6% Ni over 4.6 metres, including 18.4% Ni over 2.2 metres (see Karora news release, April 6, 2021). Drilling is aimed at defining the width and strike of the newly discovered trough. To date 11 holes have been completed for 1,613 metres. Contact-related nickel sulphides was observed in all 11 holes drilled to date with preliminary interpretation indicating the trough to be 50 metres wide. Assay results are pending at third-party labs. This first stage of follow-up drilling is scheduled to be completed by the end of 2021.

Karora is focused on doubling gold production to 200,000 ounces by 2024 compared to 2020 and reducing costs at its integrated Beta Hunt Gold Mine and Higginsville Gold Operations in Western Australia. The Higginsville treatment facility is a low-cost 1.6 Mtpa processing plant, expanding to a planned 2.5 Mtpa by 2024, which is fed at capacity from Karora’s underground Beta Hunt mine and Higginsville mines. At Beta Hunt, a robust gold Mineral Resource and Reserve is hosted in multiple gold shears, with gold intersections along a 4 km strike length remaining open in multiple directions. HGO has a substantial Mineral gold Resource and Reserve and prospective land package totaling approximately 1,800 square kilometers. The Company also owns the high grade Spargos Reward project which is anticipated to begin mining in 2021. Karora has a strong Board and management team focused on delivering shareholder value and responsible mining, as demonstrated by Karora’s commitment to reducing emissions across its operations. Karora’s common shares trade on the TSX under the symbol KRR and also trade on the OTCQX market under the symbol KRRGF. 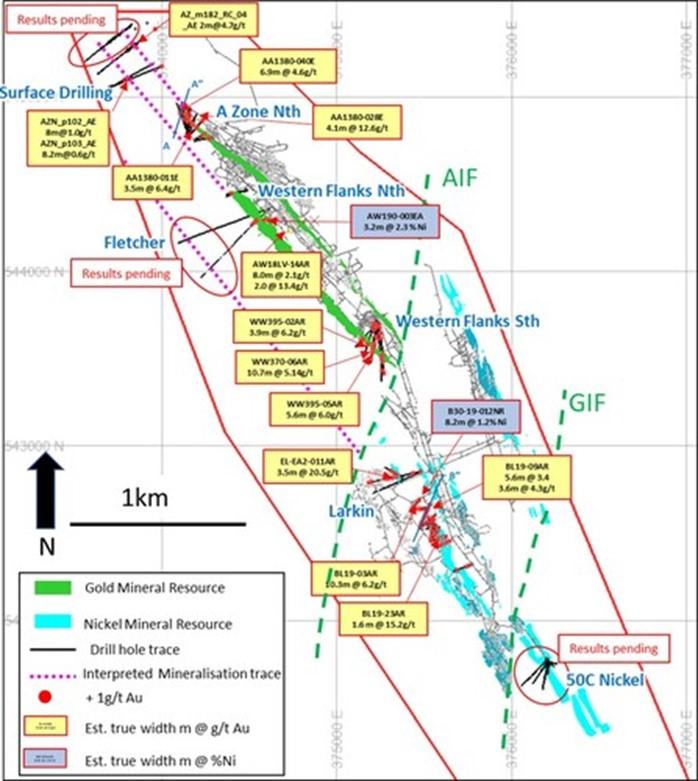 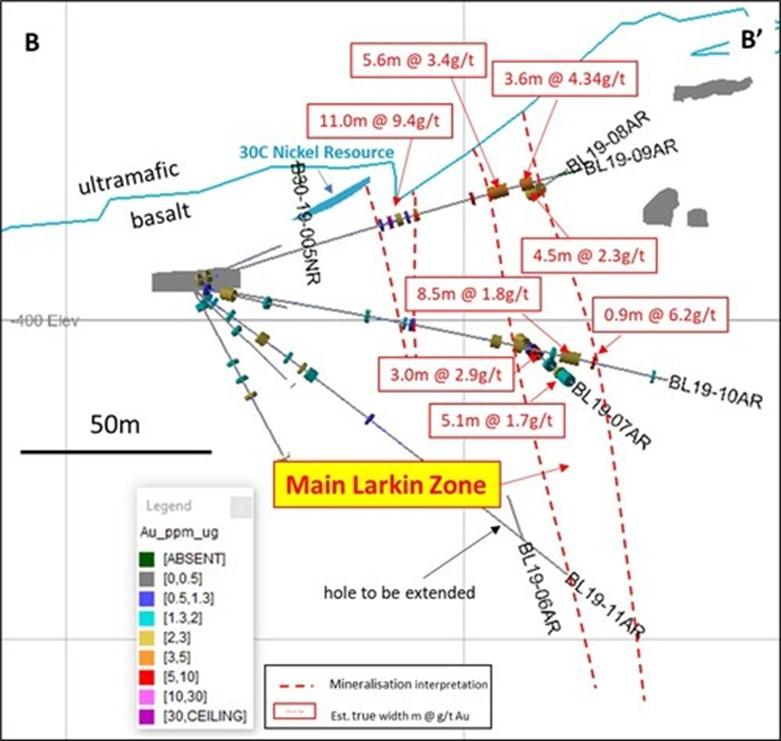 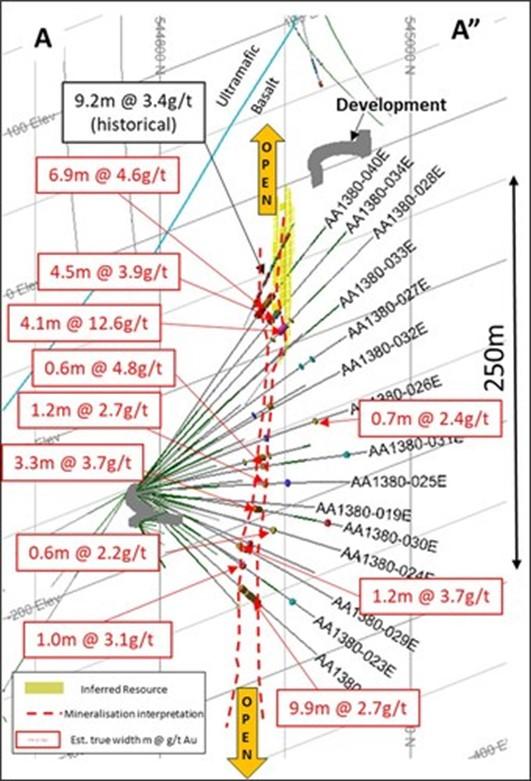