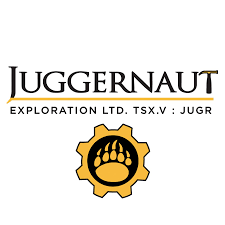 Juggernaut Exploration Ltd. (TSX-V:JUGR) (Frankfurt:4JE) is pleased to announce that its non-brokered private placement of $2,400,000 announced on April 9th, 2018 was oversubscribed and closed on April 25th 2018. The company raised gross proceeds of $2,743,014.27. The offering received strong support and interest from institutions, pros and accredited Investors in Canada and Europe.

The proceeds will fully fund multiple inaugural drill programs on the 100% controlled Empire and Midas properties. Drilling is planned to focus on several extensive polymetallic bedrock discoveries on the Empire property at the Metalworks, Big One, Max Min, Rockstar zones, and on the Midas properties 1.6 km x 2.1 km King Solomon Gold Zone. The systematic exploration is also planned to include ground and airborne geophysics, detailed mapping, additional alteration studies to assist in understanding the extent and controls on mineralization, helping further define the geologic models. These properties are located adjacent to extensive infrastructure just outside of Terrace British Columbia.

An extensive geophysically indicated buried strong bedrock conductor has been identified approximately 3.5 kilometres north of the Inca Trend (Link to video). The Big One anomaly is a strongly conductive body measuring 1000 by 800 by 300 metres. The conductive zone comes to within 30 m of the surface remains open to depth. The tabular shape of the conductive body, the presence of sulphides including chalcopyrite on surface, and the presence of marine fossils in the area are all strong indicators of being near what was a hydrothermal vent system, a black smoker. These results demonstrate Big One has strong potential for an Eskay Creek style VMS at depth. Drilling will test the core of this anomalous body.

At the southern end of the Inca Trend is the Rockstar zone, defined by gold and polymetallic mineralization in bedrock grabs and channels measuring 1000 x 550 m with 450 m of vertical relief and remains open in all directions (link to video). Rockstar has semi-massive sulphide lenses and stringers, and is hosted in a layered sequence of pervasively altered Hazelton volcanics (link to video). Highlights from the Rockstar zone include a channel cut over 6.02 metres including 1.53 grams per tonne gold, 1.38 % copper, 0.23 % zinc, and 0.13 % lead (See Dec 5th Press Release). This channel started and ended in mineralization. The early season exploration program will augment and refine the inaugural drilling program at Rockstar.

A highlight of the 2017 program was the discovery of the Max Min, a 170 by 100 metre zone of bedrock grab, chip, and channel samples containing polymetallic and gold mineralization (link to map), and phyllic alteration that together indicate the presence of a feeder zone or hydrothermal system at depth. Highlights include a channel sample with 4.8 grams per tonne gold, 0.26 percent copper, 3.73 percent zinc, and 4.85 percent lead over 4.6 metres. Five channel samples of a metre or less range from 10.3 to 56.4 grams per tonne gold (See Nov 29th Press Release). The drill program has been designed to test the source of the mineralization in this key target area.

Assay results from Metalworks have more than doubled the size of the zone with mineralized bedrock grab, chip, and channel samples from 95 by 85 metres in 2016 to 300 by 130 metres in 2017 and it remains open (link to map). This resulted from newly exposed bedrock along the fringes of the rapidly receding glacial ice and snowpack. Highlights include a 5-metre chip sample that assayed 2.64 grams per tonne gold, 277 grams per tonne silver, 3.88 percent zinc, 11.95 percent lead (See Nov 29th Press Release). With the expansion of Metalworks in 2017 by ~200 metres, it is now only ~750 metres south of Olympus, ~250 metres west of Metallica, and 400 metres to Max Min, only separated by rapidly receding glacial ice and snowpack. These zones share a similar style of mineralization, which is predominantly hosted structurally above extensive hydrothermal breccias. Other similarities include the same stratigraphic package of rocks, potassic and phyllic alteration, and late porphyry dykes all of which suggest a shared porphyry feeder source of mineralization at depth.

The King Solomon Zone is within a district scale 18 x 10 km quartz, sericite, pyrite alteration zone that was mapped by the British Columbia Geological Survey in 2007 (link to video). The survey also mapped a sequence of marine volcanics and suggested this region was prospective for VMS deposits and the alteration system may be a result of such a deposit. Post-volcanic deformation appears to have remobilized gold and polymetallic mineralization into faults, shear zones, and along foliation planes. A recent preliminary alteration study indicates the King Solomon Zone is an orogenic mineralizing system based on several lines of evidence. The planned 2018 drill program has been designed to test the King Solomon Zone.

Mr. Dan Stuart, Director, President and CEO of Juggernaut states: “The company and entire geologic team are very excited to drill these new mineralized bedrock discoveries on Empire and Midas in 2018. These discoveries are located in key geologic terrane that is known to host multiple world class mineral deposits and have excellent potential to be a drill hole away from a significant new discovery in the subsurface. Both the Empire and Midas discoveries have already garnered the attention of institutions and senior miners alike both have road access and are in close proximity to excellent infrastructure in Terrace British Columbia. We look forward to the 2018 drilling season with great anticipation.”

Dr. Stefan Kruse, Chief Consulting Geologist stated, “Results to date are extremely encouraging. We look forward to unlocking the full potential of the Empire and Midas properties in 2018 with our planned inaugural drill program.”

Stefan Kruse, Ph.D., P. Geo., Chief Geologist, is the qualified person as defined by National Instrument 43- 101, for Juggernaut Exploration projects, and supervised the preparation of, and has reviewed and approved, the technical information in this release. Further information regarding Juggernaut’s Midas and Empire properties can be sourced on-line at www.juggernautexploration.com, or by contacting Dan Stuart at 778-233-0293.

All rock, channel and talus fine samples were crushed and pulverized at ALS Canada Ltd.’s lab in Terrace, BC or in Reno Nevada. ALS is either Certified to ISO 9001:2008 or Accredited to ISO 17025:2005 in all of its locations. The resulting sample pulps were analyzed for gold by fire assay in Reno, Nevada or in Vancouver, BC. The pulps were also assayed using multi-element aqua regia digestion at ALS Canada Ltd.’s lab in Vancouver, BC. The silt samples were sieved and assayed at ALS Canada Ltd.’s lab in Vancouver, BC. The coarse reject portions of the rock, channel and talus fine samples, as well as the pulps, were shipped to J2 Syndicate’s storage facility in Terrace, BC. The silt samples were disposed of after analysis. All samples were analyzed using ALS Canada Ltd.’s assay procedure ME-ICP41, a 1:1:1 aqua regia digestion with inductively-coupled plasma atomic emission spectrometry (ICP-AES) or inductively-coupled plasma mass spectrometry (ICP-MS) finish for 35 elements as well as the Au-AA24 lead-collection fire assay fusion procedure with atomic absorption spectroscopy (AAS) finish. Any results greater than 100 ppm for silver or 10,000 ppm copper, lead and zinc were additionally assayed using ALS’s OG46 method particular to each element. This method used an HNO3-HCl digestion followed by ICP-AES (or titrimetric and gravimetric analysis). Gold values of greater than 10 ppm Au were assayed by the Au-GRA22 method which includes a fire-assay fusion procedure with a gravimetric finish. Blanks and duplicates QA/QC samples were inserted into channels sample laboratory batches. Additionally, and 10% sub-sample of pulp and reject material was sent to Activation Laboratories in Ancaster Ontario, for check-analysis.

The reader is cautioned that grab samples are spot samples which are typically, but not exclusively, constrained to mineralization. Grab samples are selective in nature and collected to determine the presence or absence of mineralization and are not intended to be representative of the material sampled.