The fundamental drivers for Gold and the US Dollar are similar and that is why they typically trend together. Negative and/or falling real rates drive Gold and the same drives the greenback though with respect to differentials between the other competing currencies. When real rates are rising or strong in the US that is bearish for Gold and bullish for the US Dollar. The opposite is also true. And with the US Dollar being the global reserve currency, it naturally competes with Gold, which is an alternative. All being said, history as well as recent action suggests that weakness in the stock market is more crucial to Gold’s future than weakness in the US Dollar.

We do not want to diminish the impact of the US Dollar (with respect to Gold) but its weakness from early 2017 into Q1 2018 failed to impact the precious metals sector in a meaningful way. Since precious metals peaked in the summer of 2016, the US Dollar index made two new lows (one in September 2017 and one in early February 2018) yet precious metals (aside from Gold) didn’t even come close to their 2016 highs. Moreover, during the recent decline in the US Dollar index from nearly 104 to 88, the stock market outperformed Gold, gold stocks and Silver. Clearly, Gold needs something else to happen to trigger its bull market.

As we’ve often discussed, Gold has continued to underperform the stock market and from an intermarket perspective, this has prevented it from starting a real bull market.

History argues that Gold cannot be in a real and significant bull market unless it is outperforming the stock market. In the chart below we plot Gold (blue) along with the Gold to S&P 500 ratio (black). 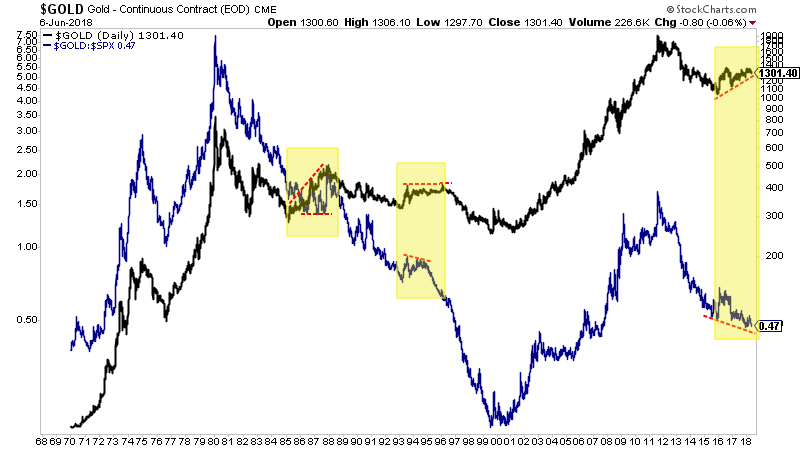 The reality is, real interest rates tend to follow the stock market.

At present, If the stock market continues to rise, then the economy is performing well and that means the Fed will continue to hike rates. That means real rates (at least on the short end and that is what impacts Gold) will remain stable or even rise.

The other bullish catalyst for Gold (an acceleration in inflation) is also bearish for the stock market as rising inflation leads to falling margins (for corporations) and falling multiples for stocks.

In any case it’s quite clear that a big bull market in Gold will not begin or take place without first a bear market in stocks. A bear market in stocks would trigger or coincide with positive fundamental developments for Gold. Sure, a decline in the US Dollar can certainly stabilize Gold or support rallies in the interim. However, Gold’s outperformance of the stock market is more important (than a falling dollar) for it to begin a big bull market. Until that begins we have narrowed our focus to a smaller group of companies, capable of rising 300% to 500% without the help of metals prices. To follow our guidance and learn our favorite juniors for the balance of 2018, consider learning more about our service.