International Minerals to Be Acquired by Hochschild Mining

International Minerals to Be Acquired by Hochschild Mining 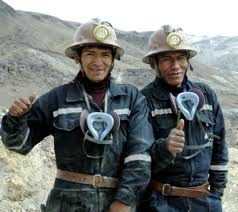 International Minerals Corporation (TSX: IMZ) (SWISS: IMZ) announces that it has entered into a binding arrangement agreement with Hochschild Mining plc. pursuant to which Hochschild will acquire IMZ, primarily for IMZ’s 40% interest in the jointly-owned (Hochschild 60%) Peruvian assets: the Pallancata silver mine and the Inmaculada gold-silver development project.

Hochschild will acquire all of the issued and outstanding shares of IMZ (other than those that it already owns) by way of a court-approved Plan of Arrangement under the Business Corporations Act (Yukon).

Pursuant to the Arrangement Agreement, each IMZ shareholder (other than Hochschild in respect of the cash) will receive consideration comprising:

The following non-Peruvian assets and liabilities of IMZ will be transferred to SpinCo at closing:

Commenting on the signing of the Arrangement Agreement, IMZ President/CEO, Stephen Kay, said: “The IMZ Board believes that the transaction is a “win-win” situation for both companies and their respective shareholders. The IMZ shareholders receive a significant cash component per share and retain future upside growth potential with a well-funded new company, SpinCo, and its advanced Gemfield gold project in mining-friendly Nevada. From Hochschild’s perspective, the transaction results in their increasing their ownership from 60% to 100% in two of their key precious metal assets in Peru”.

SpinCo is incorporated in British Columbia, Canada and will apply to list its shares on a Canadian stock exchange. Any listing will be subject to meeting the initial listing requirements of such stock exchange and there can be no assurance as to if or when the SpinCo shares will be listed.

It is intended that IMZ will de-list from the Toronto Stock Exchange (TSX) and the SIX Swiss Exchange and will cease to be quoted on the Open Market of the FWB Frankfurter Wertpapierborse (the Frankfurt Stock Exchange) and various other stock exchanges in Germany upon closing of the transaction.

IMZ retained Paradigm Capital, an independent Canadian investment bank, to prepare a formal valuation of both IMZ and SpinCo (under the guidelines of Canadian Multilateral Instrument 61-101) and a Fairness Opinion with respect to the overall transaction. Paradigm concluded that the consideration to be received under the Arrangement Agreement is fair, from a financial point of view, to the shareholders of IMZ (other than Hochschild and its affiliates).

Combining the cash consideration to be paid by Hochschild of US$2.38 per share (approximately C$2.46) with the Fair Market Value per share for SpinCo’s assets (Nevada properties and cash) estimated by Paradigm as ranging from C$0.58 to C$0.85 per share, the transaction represents total consideration (cash and SpinCo) of approximately C$3.04 – C$3.31 per share. This value range represents a 15% – 25% premium to IMZ’s spot price of C$2.65 and a 24% – 35% premium over IMZ’s 20-day volume weighted average price on the TSX of C$2.46.

Completion of the Plan of Arrangement is subject to other customary conditions including the approval of the Supreme Court of the Yukon and Toronto Stock Exchange approval of the listing of the SpinCo shares. In addition, the transaction remains subject to the Swiss Take-Over Board’s final and binding confirmation that the transaction is exempt from Swiss take-over laws.

The Arrangement Agreement includes customary deal protection provisions, including a US$10 million termination fee payable by either party in certain circumstances and a right of Hochschild to match a competing superior proposal.

International Minerals Corporation is a Canadian public company headquartered in Scottsdale, Arizona, with interests in gold and silver properties, both producing and under development, in Peru and the USA. The company currently is listed on the Toronto and Swiss Stock exchanges under the symbol “IMZ”. 117,636,376 common shares are issued and outstanding. 3,755,746 shares (3.2%) are owned by Hochschild.

Hochschild Mining plc is a leading precious metals company listed on the London Stock Exchange (HOCM.L / HOC LN) with a primary focus on the exploration, mining, processing and sale of silver and gold. Hochschild has almost fifty years’ experience in the mining of precious metal epithermal vein deposits and currently operates four underground epithermal vein mines, three located in southern Peru and one in southern Argentina. Hochschild also has numerous long-term projects throughout the Americas.