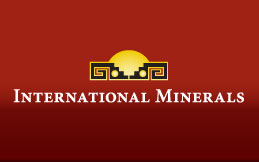 International Minerals Corporation (TSX: IMZ) (SWISS: IMZ) announces that following receipt of final approval from the Government of Ecuador, an agreement to sell the Company’s interest in the Rio Blanco gold and silver property in Ecuador to a private Hong Kong based company closed on June 21, 2013.

IMZ will receive gross proceeds of $28 million from the Buyer based on the following schedule: (i) $10.0 million on closing (net $6 million after selling costs); (ii) $5.0 million by December 2014, (iii) $9.0 million by June 2015; and (iv) $4.0 million upon the commencement of commercial production at Rio Blanco. Following receipt of the initial $10 million payment on closing, the remaining payments are conditional upon the Buyer retaining its interest in Rio Blanco. On closing, the Buyer assumed operating control of the property.

With the conclusion of the sale of Rio Blanco, IMZ management anticipates that its strategic withdrawal from Ecuador will be finalized within the next few months, pending completion of all of the necessary corporate and legal issues required under Ecuadorian law.