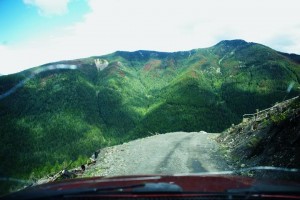 The Company’s gold exploration property, which consists of 19 contiguous crown granted claims and four mineral claims, collectively comprising approximately 1,500 hectares, is located approximately 7 km south of Silverton, British Columbia, on the east side of Slocan Lake. Access to the Properties is via Highway 6 for 8 km south of Silverton and then via Red Mountain Road for 2 km and a four-wheel drive road along Fingland Creek for 5 km.

The Company’s exploration drill program comprised a single, helicopter supported, core drill hole (LH-12-25), which was drilled to a depth of 246 metres. The assay results for drill hole LH-12-25 are presented in the following table:

Drill core was split and sent to Acme Analytical Laboratories (Vancouver) Ltd. The samples were crushed to 75% minus 10 mesh (<1.7mm) and a 250 gram subsample is riffle split then pulverized to 95% minus 150 mesh (<100 microns). Gold analysis was performed on a 30 gram subsample by fire assay extraction with AA (“Atomic Absorption”) finish. Overlimits (>10 ppm) were re-assayed with gravimetric finish.

Property Geology of the Area

There has been a long history of exploration in the Property area and based on a review of the BC MINFILE Mineral Inventory database, the Company believes that the primary zone of mineralization within the “LH occurrence” follows a zone of fracturing, faulting and silicification within a roof pendant of Lower Jurassic Rossland Group metavolcanics. The zone width is 6.1 to 13.7 metres, striking nearly east-west and dipping north at about 55 degrees. According to the BC MINFILE Mineral Inventory database records, the disseminated gold mineralization is hosted in quartz lenses and veins 30 to 60 centimetres wide and consists of native gold, arsenopyrite, pyrite and pyrrhotite with minor chalcopyrite and native arsenic.

The Company’s initial drill program focused in an area approximately 700 metres to the south of the LH occurrence, which the Company believes is a separate and distinct potential gold target occurrence.