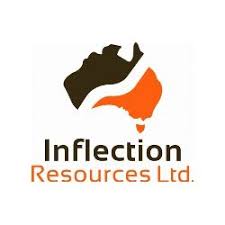 Alistair Waddell, Inflection’s President and CEO, states, “We are very happy to have discovered a second zone of alteration which suggests we could be in the vicinity of a second porphyry centre. We are currently planning a series of follow-up, step-out holes at Trangie while continuing our first-pass, systematic program across the greater portfolio of targets in northern New South Wales. Once the permits for the additional drill platforms have been received, we will aggressively execute a series of step-out holes designed to vector into potential porphyry centres at both Trangie and Myallmundi.”

Dr. Stuart Smith, Director and Head of the Company’s Technical Committee, states, “We are highly encouraged by these early drill results. The alteration and vein assemblages seen at Trangie consist of several generations of vein stockwork and alteration comprising early biotite-magnetite-pyrite veins overprinted by various generations of quartz, carbonate, epidote, pyrite, chlorite, actinolite and chalcopyrite as well as common orange albite-hematite-pyrite-chlorite-epidote-chalcopyrite zones. These complex, multi-phase vein and alteration assemblages are typical of hydrothermal alteration in Macquarie Arc mineralised districts where it is often associated with the margins of porphyry centres. We look forward to drill testing these very encouraging Trangie and Myallmundi areas.”

Inflection is pleased to provide an update on its first-pass drilling on its Northern NSW targets with three additional gold-copper porphyry targets having been tested, bringing the total to six. The three additional porphyry targets are Trangie, Mungeribar and Meringo, where nine additional drill holes totalling 1,910 metres have been completed. To-date, a total of fourteen holes comprised of 2,718 metres of drilling have been completed in the northern NSW program. The first-pass drill program on the portfolio of targets continues with the rig moving northwards towards the Moonagee, Boorara and Colossal targets. (See Inflection September 2, 2020 news release for a target location map). 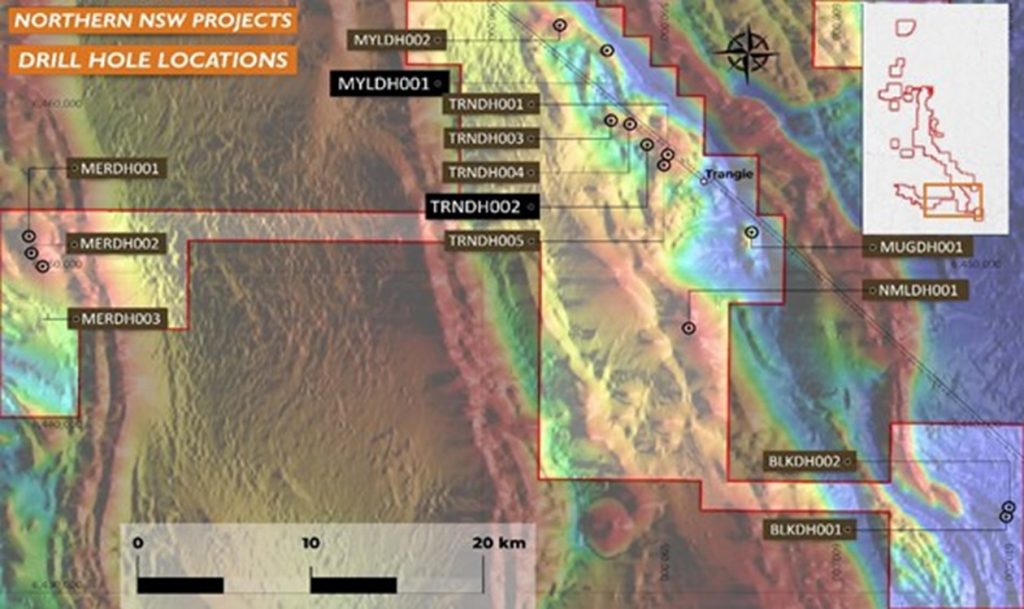 Five initial drill holes have been completed on the Trangie target. Trangie holes TRNDH001 to 005 are broadly aligned over approximately 4.2 kilometres along a northwest trend following the Mitchell Highway. The results from these holes are highly encouraging with all holes showing various alteration assemblages considered indicative of a potential hydrothermal system containing varying degrees of alteration and veins containing quartz, carbonate, biotite, magnetite, albite, chlorite, actinolite, epidote, pyrite and chalcopyrite. In general, the northern and southernmost holes are characteristic of an outer propylitic association with the central hole, TRNDH002, potentially associated with a more proximal part of a hydrothermal system.

Hole TRNDH002 intersected pervasive chlorite-magnetite-albite-epidote alteration throughout the host basalt. This alteration is overprinted by patchy, diffuse orange albite-epidote-pyrite-chalcopyrite +/- actinolite and these appear to become more magnetite and biotite rich towards the end of the hole at 210.30m. The hole also intersected a 2 to 3 metre zone of sericite-pyrite-albite with >5% pyrite. Veining in the hole comprises early biotite-magnetite-pyrite veins with biotite and albite haloes and overprinting magnetite-epidote-pyrite-chlorite-chalcopyrite veins and common pale to red albite-hematite-pyrite-chlorite-epidote veins. In this hole, the nature and intensity of the alteration and veining and enhanced sulphide occurrence of both disseminated and vein-hosted pyrite and chalcopyrite provide strong support for alteration association related to a potential porphyry. 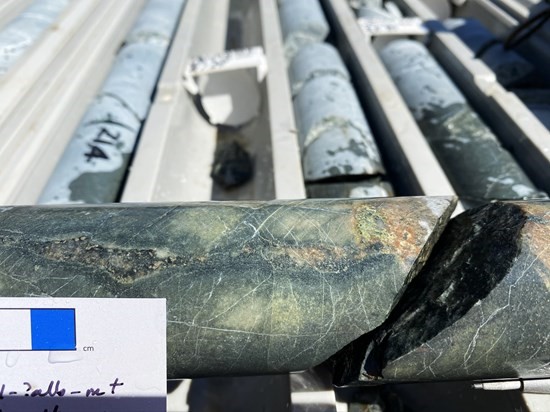 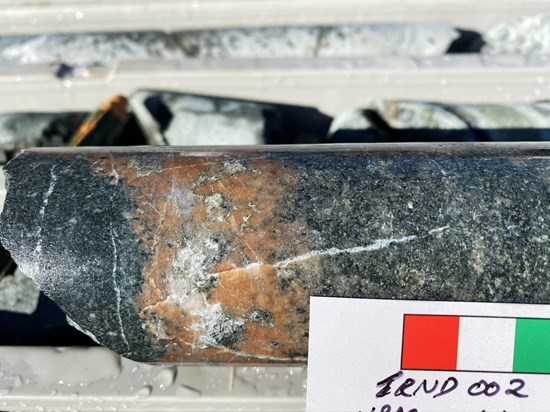 Holes TRNDH001, 003, 004 and 005 are pervasively chloritized and have weak to moderate epidote alteration. Variable and patchy albite (+/- quartz) alteration occurs in holes TRNDH003, 004 and 005, and patchy actinolite in hole TRNDH001. Vein assemblages in the holes are characterised by various combinations of epidote, epidote-quartz-chlorite (+/- magnetite, hematite, and carbonate), albite-pyrite, rare orange albite-quartz-carbonate-chlorite-magnetite-pyrite and common late-stage carbonate veins. Sulphides in the holes comprise low to trace pyrite and chalcopyrite both disseminated and in veins. The occurrence of low-level sulphides, particularly chalcopyrite is encouraging and provides additional confidence of the initial interpretation of the holes locating within an outer propylitic alteration system.

These results are considered highly encouraging and it is intended to follow up the results with a second round of drilling, with a particular focus in the vicinity of drill hole TRNDH002. The drill core from these holes is currently being prepared for cutting and assaying. The observations regarding the interpreted alteration assemblages will be confirmed by petrological examination.

One hole was completed at Mungeribar which intercepted a sequence of basaltic volcaniclastic conglomerates and sandstones. The drill core is pervasively chloritized and contains abundant magnetite with clasts up to 1cm in diameter. Thin minor epidote, zeolite and calcite veins are the only vein components. The origin of the magnetite is uncertain, and the preliminary interpretation is that the pervasive chlorite is probably a regional metamorphic effect and that the target is likely well removed from any hydrothermal system. No further work is currently planned on this target.

Three holes were completed on the Meringo target which all intersected a sequence of unaltered limestones. No further work is planned on this target.

Due to the favourable initial results at Trangie, the Company has applied for permission to complete a series of step-out holes. These additional holes should enable the Company to vector towards a potential porphyry centre using the latest alteration and mineral chemistry vector techniques.

The applications submitted for additional step-out drill holes described in news release dated September 2, 2020 are pending approval. These permits are anticipated during October.

Core from the recent drilling has been logged, photographed, and dispatched for cutting and sampling. The samples will be dispatched next week to ALS Laboratories in Orange, NSW for multielement analysis and for spectral analysis which will aid alteration mineralogy identification.

First-pass drilling will continue to focus on the portfolio of targets which are located in an area spanning over approximately 200 kilometres. The drill will head northwards towards the Moonagee, Boorara and Colossal targets. Once permission from the Resource Regulator for the step out holes at Myallmundi has been fully received, the Company anticipates either using a second drill rig, depending on availability, or temporarily using the current drill rig to focus on vectoring into potential mineralized systems at Myallmundi and Trangie.

The Company is using cost-effective mud-rotary drilling to cut through the unmineralized post-mineral sedimentary cover. Once basement is reached, the rig transitions to diamond core drilling. It is well documented that mineralized bodies elsewhere in the belt, in particular porphyry and intrusive related systems, have large district-scale alteration and geochemical halos or footprints surrounding them. The Company is completing a series of short diamond drill holes into bedrock rather than just one or two deep and more expensive diamond drill holes. Multiple data points gained from alteration and mineral geochemistry will then be used to vector additional deeper holes. This is a proven exploration strategy in the covered segments of the Macquarie Arc having been directly responsible for the Northparkes and Cowal discoveries.

The scientific and technical information contained in this news release has been reviewed and approved by Mr. Carl Swensson (FAusIMM), Inflection’s Vice President Exploration, and a “Qualified Person” as defined in National Instrument 43- 101 – Standards of Disclosure for Mineral Projects.

Drilling was conducted by DDH1 Drilling Pty Ltd using a truck-mounted multi-purpose Sandvik drill rig. Mud rotary drilling was utilised to drill through the cover sequence. At the unconformity the drilling method was changed to diamond drilling using NQ – sized core. All materials and core were transported to the Company’s Trangie field office at the end of each shift.

The core was logged in detail at the Company’s base, photographed and marked for cutting and sampling. The core was then transported by the Company’s geologist to Rangott Mineral Exploration Pty Ltd in Orange NSW to a secure environment where the core was cut in half to the Company’s specified sample intervals. The half core samples were placed in numbered calico bags with internationally certified blanks and standards inserted every 20th sample. The retained half core is currently in locked secure storage at Rangott Mineral Exploration Pty Ltd.

Samples were dispatched to ALS Laboratories in Orange NSW by Rangott Exploration Pty Ltd. ALS Laboratories are an accredited analytical laboratory meeting ISO/IEC 17025:2005 and ISO 9001:2015. Samples were prepared by crushing and grinding via ALS methods CRU-21 and PUL-32 respectively. The pulps were then assayed for 48 elements via ALS method ME-MS61 using a 25g sample after a four acid near total digest with an ICP-MS finish. Gold was assayed by fire assay using ALS method Au-AA23 using a 30g sample charge and AAS finish. Laboratory standards and QA-QC are monitored by the Company. Coarse rejects from the sample preparation are subjected to short-wave infrared spectral analysis.

About Inflection Resources Ltd. Inflection is a technically driven gold and copper-gold focused mineral exploration company listed on the Canadian Securities Exchange with projects in Eastern Australia. The Company is systematically drill testing a large portfolio of drill-ready projects in New South Wales and in Queensland.

The Company is exploring for large gold and copper-gold deposits in the northern interpreted extension of the Macquarie Arc, part of the Lachlan Fold Belt in New South Wales. The Macquarie Arc is Australia’s premier porphyry gold-copper province being host to Newcrest Mining’s Cadia deposits, the CMOC Northparkes deposits and Evolution Mining’s Cowal deposits plus numerous exploration prospects including Boda, the recent discovery made by Alkane Resources.