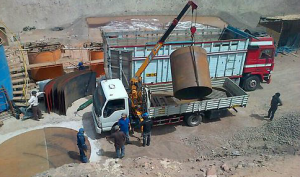 INCA ONE RESOURCES CORP. (TSX-V:IO) is pleased to announce that it has closed the first tranche of its previously announced bond financing for gross proceeds to the Company of $2,700,000.

Pursuant to the Bond Financing, the Company’s wholly-owned subsidiary issued a three year bond which will bear interest at a rate of 10% per annum, calculated and payable quarterly in arrears commencing no later than six months from the date of issue. An additional $2,800,000 in Bonds will be issued in a subsequent closing of the Bond Financing, which is expected to be on or around June 30, 2014.

The proceeds from the Bond Financing will be used to fund improvements on the Company’s gold mining facility located in Chala, Peru.

About Inca One Resources Corp.

Inca One is a Canadian-based mineral resource company and ore processing company with a gold milling facility in Peru, servicing government-permitted small-scale miners. A highly mineral-rich country, Peru is one of the world’s top producers of gold, silver, copper and zinc, with substantial production coming from small scale miners who need government permitted milling facilities to process their ore (such as the Company’s Chala mill).