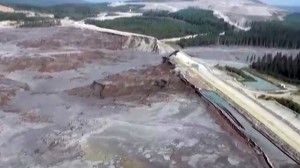 Imperial Metals Corporation (TSX:III) reports the tailings storage facility at its Mount Polley mine was breached, releasing an undetermined amount of water and tailings in the early morning of August 4. The cause of the breach is unknown at this time.

Senior company management are at the mine site and are working with mine operating personnel, local agencies, provincial ministry officials and the engineers of record to assess the extent of the breach and the impact of the released water and tailings on the surrounding area.

The Company will provide further information when confirmed and available.