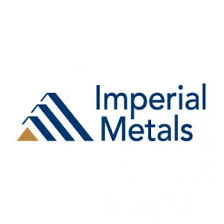 The V-Zone is located near the western edge of the Ruddock Creek massive sulphide horizons, which have an indicated strike length of about five kilometers, and is approximately two kilometers west of the Creek Zone, the nearest zone of detailed drilling.  Little or no exploration drilling has been conducted along the intervening section of the horizon. The V zone strikes east west and dips at about 70 degrees to the north. The zone had been traced with surface showings and by shallow drilling for a horizontal distance of about 700 metres, and with this recent intersection to a depth of approximately 425 metres.

Following are the assays from the mineralization intersected in RD-18-V41:

Due to the steep terrain long, nearly flat drill holes from near the valley bottom were designed to test the zone at depth.  Hole RD-18-V41 was drilled using an underground diamond drill rig bolted to a road accessible cliff face at an azimuth of 27 degrees and a dip of plus 10 degrees.  Core size was HQ to a depth of 450m when the core size was reduced to NQ size, the hole was drilled to a final depth of 828.8 metres.

The second drill hole being completed from the same setup, currently at about 700 metres, is at the same azimuth of 27 degrees as hole RD-18-V41 but started at a dip of minus 10 degrees targeting the mineralization approximately 275 metres below the intercept in RD-18-V41.  A second drill has recently been set up on the same drill pad and is drilling a flat hole aimed to intersect the V-Zone between and southeast of the targeted V-Zone intersections first two drill holes.

The Ruddock Creek Project is operated by way of a Joint Venture with Imperial, Mitsui Mining and Smelting Co. Ltd. and Itochu Corporation. Imperial operates the project through its wholly owned subsidiary Ruddock Creek Mining Corporation.  Japan Oil, Gas and Metals National Corporation (“JOGMEC”) has agreed to fund Imperial’s share of the 2018 drilling program and upon the completion of the program has the assignable right to be vested in an approximate 1.57% Participating Interest in the Joint Venture. At that time Imperial’s interest will be reduced to approximately 48.43%.

Jim Miller-Tait, P.Geo., VP Exploration is the designated Qualified Person as defined by National Instrument 43-101 for the exploration program and has reviewed this news release.  Ruddock Creek samples for the 2018 drilling reported were analysed at Bureau Veritas Mineral Laboratories in Vancouver. A full QA/QC program using blanks, standards and duplicates was completed for all diamond drilling samples submitted to the labs.

Imperial is a Vancouver exploration, mine development and operating company. The Company, through its subsidiaries, owns the Red Chris, Mount Polley and Huckleberry copper mines in British Columbia. Imperial also holds an interest in the Ruddock Creek lead/zinc property.