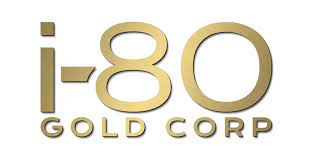 Unless otherwise stated, all amounts referred to herein are in U.S. dollars.

“The Company continues to aggressively pursue our peer-best production growth strategy.”, stated Ryan Snow, Chief Financial Officer of i-80. “Several key development milestones have been achieved in the first half of the year along with continued exploration success, demonstrating the potential to extend known mineralization. In addition, the gold prepay and silver purchase and sale agreements funded during the quarter and gold sales continued from the residual leaching at Ruby Hill and Lone Tree resulting in a cash balance of $101 million dollars.”

Lone Tree is expected to become the hub of i-80’s Nevada operations and the central processing facility for mineralization from the first four planned mining projects.  Importantly, Lone Tree is host to infrastructure that, following successful refurbishment efforts, will position i-80 as one of only three companies in the United States capable of processing both oxide and refractory mineralization.

During the quarter, the Company advanced a detailed engineering study for the restart of the autoclave.  The study is progressing on plan and is expected to be completed in the second half of 2022. The Company also continued permitting for the development of the Buffalo Mountain open pit where gold mineralization is expected to be processed at the Lone Tree leach pad facility.

In the second quarter, 2022, drilling continued for resource expansion on the Ogee and South Pacific Zones with multiple high-grade intercepts. Completed 23,944 feet of core drilling and 8,157 feet of RC drilling. The amount of drilling completed as of June 30, 2022 totaling 71,952 feet was in line with the Company’s drilling plan. Drilling targets were expansion and delineation of the newly discovered South Pacific Zone as well as delineation drilling that targeted the Otto, Adam Peak, and Ogee fault zones with underground drilling.

Construction of the exploration decline continued on plan and has been advanced approximately 1,300 feet. Additional work on metallurgical and hydrology studies, engineering of de-watering and mining options, and reclamation activities associated with the inactive tailings storage facility is also being advanced.

A major, multi-drill, exploration campaign is underway that will see a minimum of 20,000 metres drilled in 2022 followed by a resource update. Multiple gold and polymetallic deposits and exploration targets exist on the property with mineralization open along strike and at depth.

The Company has commenced permitting for the construction of a decline to access the high-grade Ruby Deeps deposit and the Blackjack Zone with the intent of trucking refractory mineralization for processing at Lone Tree.

In the second quarter, infill and step-out drilling of the Ruby Deeps zone continued with multiple high-grade intercepts and multiple brownfield exploration targets were tested. 21,595 feet of core drilling and 25,150 feet of RC drilling was completed during the quarter, with a combined total of 73,935 feet completed in the first half, in line with the Company’s drilling plan. Owing to the substantial success of the 2022 exploration campaign at Ruby Hill, the program has been expanded.

The scientific and technical information contained in this press release was reviewed by Tim George, PE, Mining Operations Manager, and a Qualified Person within the meaning of National Instrument 43-101.

i-80 Gold Corp. is a well-financed, Nevada-focused, mining company with a goal of achieving mid-tier gold producer status through the development of multiple deposits within the Company’s advanced-stage property portfolio anticipated to be processed at the centrally located Lone Tree processing facility and autoclave.