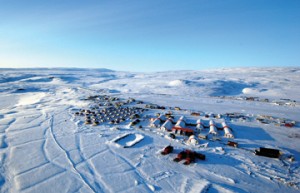 A new study entitled Levelling the Playing Field reveals the cost to explore and build new mines is as much as 2.5 times higher in northern Canada, largely as a result of a lack of critical infrastructure. This is creating major obstacles to exploring and operating in Canada’s remote and northern regions.

The study’s main findings were two-fold. First, the costs of mineral exploration and building and operating mines are significantly higher in remote and northern regions of Canada’s provinces and territories. Second, this cost premium is directly linked to the lack of infrastructure in these areas. Unlike many of their southern counterparts, companies operating in these remote areas need to invest in costly, but essential infrastructure like ports, power plants, winter and permanent roads, and accommodation facilities. In many cases, there are also sparse populations or no people for hundreds of kilometres from the project or mine.

Capital costs were higher for a range of commodities:

The Canadian mining industry is an integral part of the nation’s economy, contributing $54 billion to Canada’s GDP in 2013 and employing more than 380,000 people across the country. Direct mining employment and mining output across the northern regions of all provinces neared 16,000 workers and exceeded $3.4 billion respectively in 2011. In the territories, recent data indicate that mining accounts for approximately 15% of overall employment in the Yukon, Northwest Territories and Nunavut combined. Sustaining these benefits for future generations will require integrated, innovative policy responses by governments to create an attractive investment climate.

Despite Canada’s current leadership in mining, there are two main indicators that suggest the industry’s long-term viability is in jeopardy: reserves for several base metals have experienced significant declines since the 1980s, and production volumes of key commodities have also been declining relative to other mining countries. Resolving these issues involves increasing exploration activity to make more discoveries as a means of replacing declining reserves, and then bringing new and existing discoveries into production. Remote and northern parts of Canada hold the key to resolving both challenges.

Recently, governments have started to bring a sharper focus on economic development in the North. The federal budget 2015, for example, proposes to increase the borrowing limit for the Government of the Northwest Territories to $1.3 billion and for the Government of Nunavut to $650 million, while the extension of Canadian Exploration Expenses to include community consultation expenses will reduce the costs of exploration. The intent of the former is to give the territories greater flexibility in exploring future investments, including in infrastructure to support resource development and economic growth. Quebec’s Plan Nord is another strong commitment to northern development, and this government’s recent commitment to extend Route 167 to the Renard diamond mine is the kind of initiative required to enable new mineral exploration and mining development.

However, the study reveals additional strategic investments are warranted to overcome the cost burden and make the region more competitive for global mineral investment. In the absence of additional public infrastructure investments, the authors recommend taxation policy reform for both the exploration and production phases of mining that will help level the playing field for companies seeking to work in remote and northern regions of Canada.

“What this study makes clear is that strategic investments and good public policy are needed to open up Canada’s remote and northern regions to responsible mineral development and for Canadian governments to achieve their social and economic development goals for those regions. Smart investments and a positive tax regime to overcome the unique obstacles of these regions will be the best way to catalyze more mineral investments,” said Pierre Gratton, President and CEO, the Mining Association of Canada.

“At no time in our history has attracting risk capital been more challenging for junior exploration companies. These small businesses have made roughly 90% of Canadian mineral discoveries over the past decade. Projects in Canada’s north with a cost profile of six times that of a comparable project in the south will continue to suffer from a lack of investment without intervention,” said Rod Thomas, President, the Prospectors & Developers Association of Canada.

“Creating opportunity and prosperity in Canada’s northern and remote regions requires significant investment. We believe that the recommendations in this report will allow both the private and public sectors to contribute to much needed opportunities and prosperity for Canadians in the North and across the country,” said John Gamble, President and CEO, Association of Consulting Engineering Companies – Canada.

“The North holds Canada’s mining future and more mines are needed to ensure economic prosperity in the future. This study clearly illustrates that it is significantly more expensive to explore for and develop mines in the north relative to less remote southern localities in Canada. Levelling the playing field for mining and exploration through fiscal incentives would help to attract the investment required to find and develop more mines and lead to northern regions becoming more economically independent. That’s a win-win scenario,” said Brooke Clements, President, NWT & Nunavut Chamber of Mines.

“For Yukon to remain competitive in the international mining industry, one of the important areas we need to work towards is lowering operating costs for proponents in Canada’s North. Yukon has world class deposits and the international mining industry is fully aware of the mineral endowment, and ready to invest. We need to continue to invest, however, and work towards building roads, bridges and energy in order to support long-term sustainable growth in the mineral exploration and mining industry,” said Brad Thrall, President of the Yukon Chamber of Mines, and Chief Operating Officer of Alexco Resource Corp.

About the Mining Association of Canada

The Mining Association of Canada is the national organization for the Canadian mining industry. Its members account for most of Canada’s production of base and precious metals, uranium, diamonds, metallurgical coal, mined oil sands and industrial minerals and are actively engaged in mineral exploration, mining, smelting, refining and semi-fabrication. About the Prospectors &

The Prospectors & Developers Association of Canada (PDAC) is the national voice of the Canadian mineral exploration and development community. With a membership of over 9,000 individual and 1,250 corporate members, the PDAC’s mission is to promote a responsible, vibrant and sustainable Canadian mineral exploration and development sector. The PDAC is also known worldwide for its annual convention, regarded as the premier event for mineral industry professionals. PDAC 2016 will take place at the Metro Toronto Convention Centre from March 6 to March 9.

About the Association of Consulting Engineering Companies – Canada

The Association of Consulting Engineering Companies – Canada represents over 450 firms offering a wide range of engineering, scientific and other professional services to both the private and public sectors. ACEC is the national voice of consulting engineering on business, public policy and regulatory issues.

About the NWT & Nunavut Chamber of Mines

The NWT & Nunavut Chamber of Mines, which continues to serve companies operating in the NWT and Nunavut, has been the voice of the Northern mining and exploration industry since 1967. Its goals are to promote the industry and the North to Northerners, Canadians and the world at large. It continues to speak out on industry opportunities, concerns and issues. It advises governments, investors, the media, educational institutions, and the public on industry positions and initiatives.

About the Yukon Chamber of Mines

Established in 1943, the Yukon Chamber of Mines protects and promotes the interests of Yukon’s mineral exploration, development and mining industry through clear initiatives and policies which encourage a safe, economically viable, socially and environmentally responsible industry.