Heliostar Reports Multiple Hits at Aquila, Including 6.51 G/T Gold Over 3 Metres at the Unga Project, Alaska

Heliostar Reports Multiple Hits at Aquila, Including 6.51 G/T Gold Over 3 Metres at the Unga Project, Alaska

The 2021 drilling focused on the Amethyst Vein with these results expanding the footprint of Aquila both along strike and at depth from last year’s discovery hole (see news release dated February 23rd, 2021). Assays for six additional holes from Aquila remain pending.

Note: All numbers are rounded and widths represent drilled lengths. True thickness is estimated at 70-90% of drilled thickness.

Heliostar VP of Exploration, Sam Anderson, commented: “The Aquila target is delivering with these results defining another centre of mineralization at Unga. The phase one 2021 program has now defined shallow gold footprints over large areas at both Apollo and now Aquila, and assays remain pending for these and other targets at the project. The geological interpretation is that Aquilla is just the top of a mineralized zone and our next step is to undertake diamond drilling to define the full extent of mineralization at depth and along strike. Unga is an extremely large, 250 square kilometre, land package and this current drill program is designed to rapidly test the highest probability targets with RC drilling ahead of a systematic diamond drilling program with a goal of growing the projects existing resource to greater than 1,000,000 ounces of gold.”

The Aquila Target is a zone of outcropping epithermal quartz veins that lies within the Shumigan vein corridor, and is one of the four highest priority targets on the Unga project. Heliostar chose this area for first-pass drilling in 2020 due to the occurrence of multiple, outcropping quartz veins and high-grade mineralization at surface in an area of limited historic drilling (Figure 1). 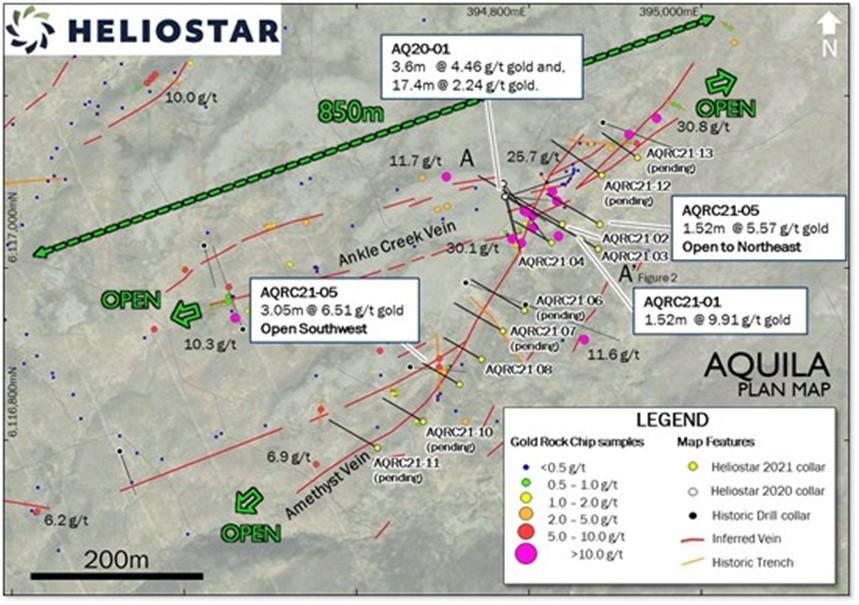 The 1980’s drill program suffered from poor core recovery and the drill results did not match the surface sampling. Heliostar drilled five holes in 2020 , returning high percentages of core recovery and results of 4.46g/t gold over 3.6m and 2.24 g/t gold over 17.37m from hole AQ20-01 (the only hole to test to the Amethyst Vein; see news release dated February 23rd, 2021).

In 2021, all thirteen RC holes completed at Aquila intersected the Amethyst Vein, which now has a drill defined minimum strike length of 425 metres. Two separate zones along the vein contain higher-grade gold mineralization and both remain open for expansion with follow-up diamond drilling.

Drill holes AQRC21-01 to 05, were drilled beneath and immediately along strike in each direction from last year’s discovery hole (AQ20-01). These new results extend mineralization 60 metres down plunge and 25 metres along strike where it remains open with assays pending.

Approximately 220 metres to the southwest, the Amethyst Vein forms another zone of mineralization in hole AQRC21-09 (3.05m at 6.51 g/t gold) near the intersection of a sub-parallel vein. This intersection remains open as well.

Based on the high gold to silver ratio, the high precious metals to base metal ratio, relative elevation of the Aquila target to SH-1 Resource and the Apollo target, and the colloform and drusy quartz textures observed within the veins, it is reasonable to infer current drilling is at a shallow level within the mineralized system. As such, the company interprets that the Aquila target has excellent potential for further expansion. 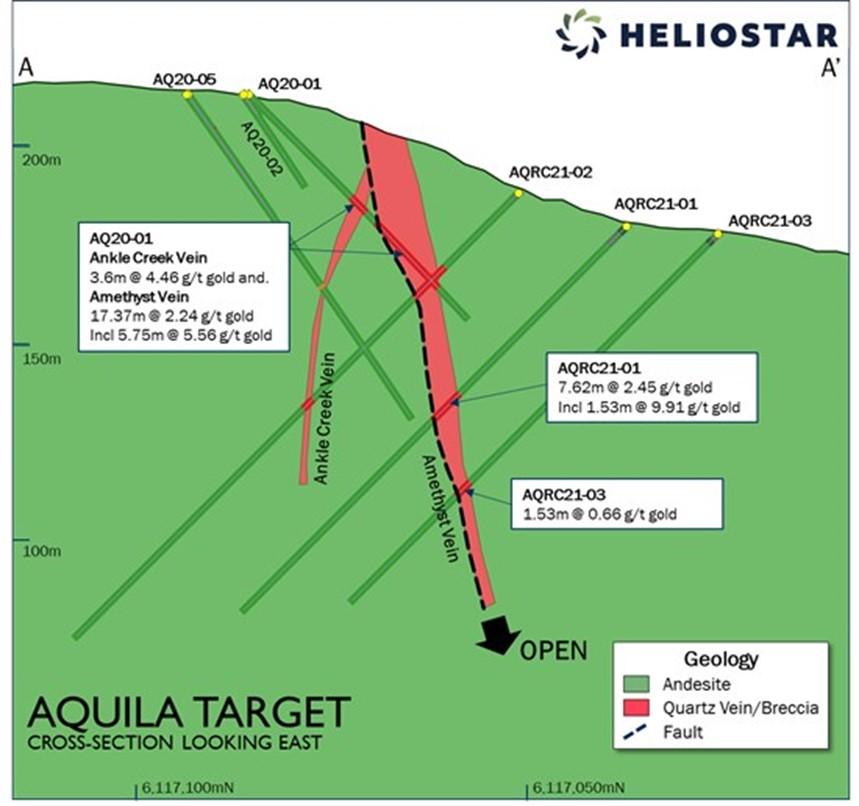 Mineralization at Aquila comprises quartz, calcite and amethyst veins that frequently contain brecciated clasts of earlier quartz vein material and wall rock. Quartz veins commonly exhibit cockscomb and colloform epithermal textures, and has experienced multiple pulses of brecciation and vein formation. Mineralization is associated with minor amounts of finely disseminated sphalerite and galena in the vein, and occasional pyrite along the vein margins.

The current drill results support Aquila being a priority target in the next drill program at Unga. The success also supports the use of RC drilling for cost-effective reconnaissance exploration, with the company completing significantly more metres per dollar with the RC rig than it would have using conventional diamond drilling.

This approach allowed testing and refinement of targets quickly and efficiently and allowed the exploration team to overcome historic issues with poor recovery. Furthermore, the exploration approach enabled identification of specific targets, both at depth and along strike, future diamond drilling at a significantly lower cost per metre drilled than had the program been executed solely with diamond drilling.

Table 1: Table of significant intersections from the Aquila Target. True thickness is estimated at 70-90% of downhole lengths. 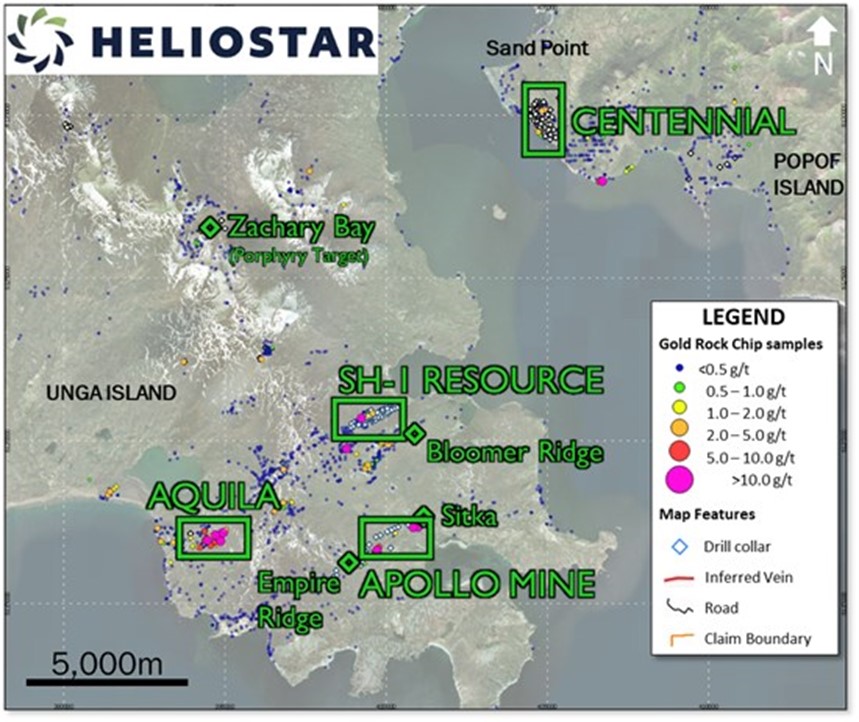