Heliostar CEO, Charles Funk, commented: “Heliostar considers each of its projects in Mexico to be a potential company maker and these results from Cumaro are a significant step towards this goal. These veins trend from a historic mine on SilverCrest Metals’ claims to the west and extend onto Heliostar’s ground, where they have never been drilled. Returning so many high-grade hits on surface over a broad area is very positive. The company continues detailed sampling in the eastern half of the claims to finalize a maiden drill program at Cumaro.”

The Cumaro project is a five square kilometre inset claim within the El Picacho district. It hosts the extensions of the El Salto, Dos Amigos, Basaitegui and Verde Veins (Figure 1). The current geological model indicates that a fault divides the Picacho-Cumaro district into western and eastern halves. West of the fault, where these results have been collected, veining and mineralization are exposed at surface. On the eastern side of the fault host rocks are interpreted as down-dropped, exposing only the weakly altered upper portions of the veins and thereby preserving the mineralized vein system at depth. 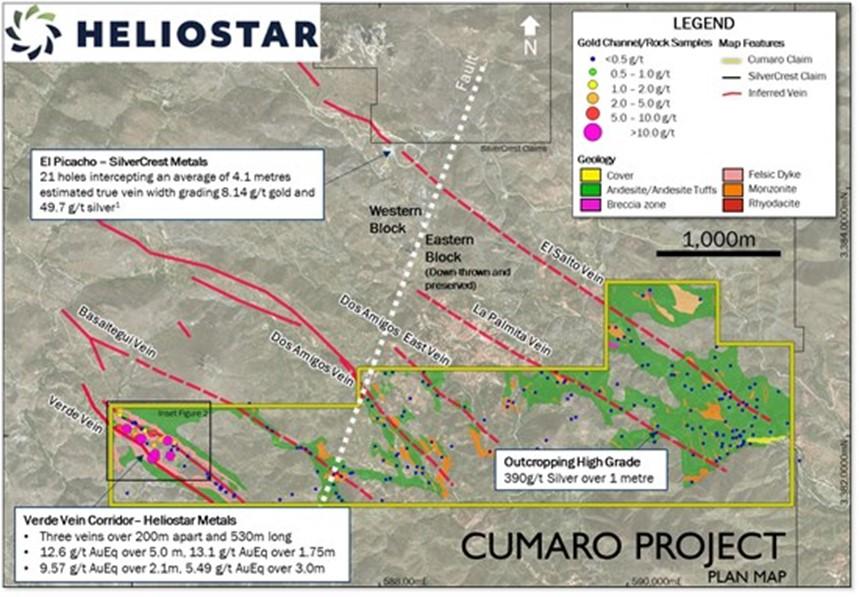 The Verde and Orilla Veins are sub-parallel northwest striking, steeply dipping epithermal veins, separated by about 60 metres that dip towards each other. Banded quartz and calcite with areas of green quartz make up most of the vein’s geology. Similar green quartz occurs within the high-grade areas of many mineralized systems in northern Sonora and this relationship holds true at Cumaro. Select samples from the green quartz returned values up to 41.2 g/t gold and 364 g/t silver. Gold and silver values spike at vein bends and intersections within the vein corridor.

The Verde Vein can be traced as a single vein over a length of 500 metres at surface with numerous exposures of high-grade gold and silver. Vein width ranges from 0.5 metres to greater than 2 metres. There is an 85 metre long historic tunnel on a single level that is accessible and underground exposures of the vein returned values including 1.75 metres at 11.5 g/t gold and 125 g/t silver and 1.65 metres at 11.9 g/t gold and 130 g/t silver at the eastern end of the drift. Grades increase to the east where underground access ends. Strong up-dip surface results such as 3 metres at 4.68 g/t gold and 60.8 g/t silver demonstrate good continuity of mineralization and makes this vein an excellent drill target. 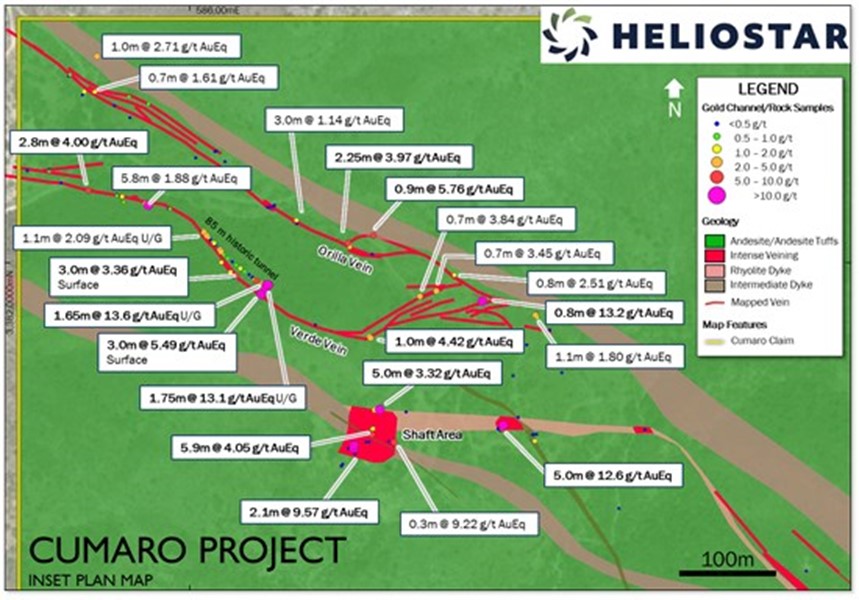 The junction of the Verde and Orilla Veins presents a compelling target in the form of a dilational zone and ore shoot. Since the vein interpretation shows them dipping towards each other, this ore shoot may be shallowly plunging and this intersection is another excellent drill target.

Exploration within the Verde Vein Corridor is on-going to expand on current outcropping mineralization and define additional drill targets ahead of the maiden drill program at Cumaro.

Furthermore, several other veins are present on the western side of Cumaro that will be mapped and sampled in detail in the coming weeks. Priorities include the extensions of the Dos Amigos Vein from the neighbouring El Picacho property. Additionally, detailed sampling and mapping will be conducted on the main vein trends identified on the eastern half of Cumaro in earlier programs.

On the eastern side, the veining and mineralization is only partially exposed by erosion. The full vertical extent of the precious metals system could be preserved at depth. No drilling has occurred within the Cumaro claim.

Previous Heliostar programs completed at eastern Cumaro defined surface alteration corridors of clay and silica-clay alteration. These assemblages support the interpreted shallow level of erosion. Sampling from that program returned 390 g/t silver from a 1.0 metre channel which demonstrates the potential for high grade mineralization. Additionally, a greater than 1 g/t silver anomaly over a 500 by 600 metre area may also define another mineralized system at depth. 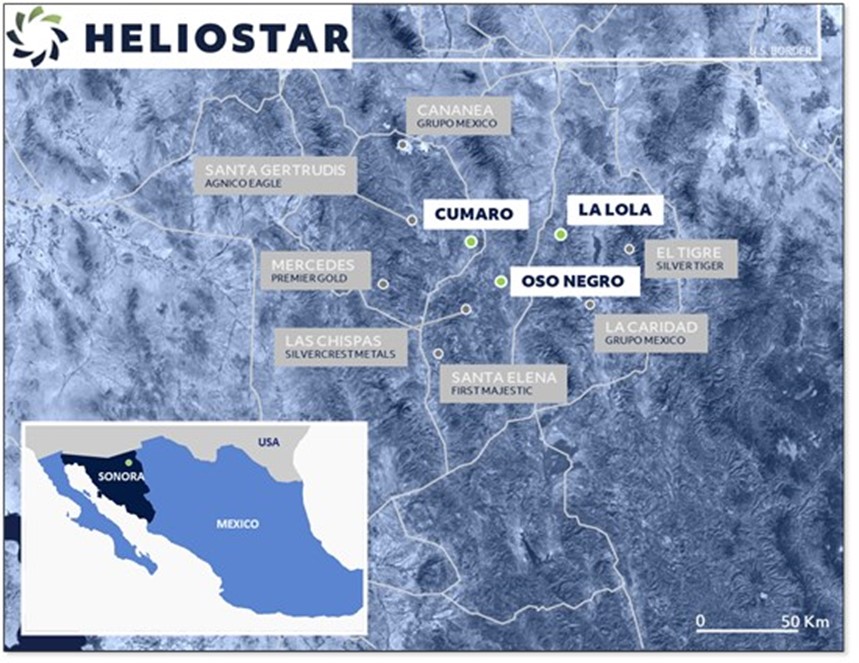 Table 1: Table of significant channel sample intersections from Cumaro. Widths are true thicknesses and gold equivalent is calculated with a gold:silver ratio of 1:75.

Rock samples were shipped to ALS Limited in Hermosillo, Sonora for sample preparation and for analysis at the ALS laboratory in North Vancouver. The ALS Hermosillo and North Vancouver facilities are ISO/IEC 17025 certified. Silver and base metals were analyzed using a four-acid digestion with an ICP finish and gold was assayed by 30-gram fire assay with atomic absorption spectroscopy finish and overlimits were analyzed by 50g fire assay with gravimetric finish.