These results position Aquila as a third centre of mineralization at the Unga project. The target is connected by road to the SH-1 Resource and the former Apollo Mine, providing convenient access for further lower cost exploration and potential mining options.

All numbers are rounded and widths represent drilled lengths. True thickness is estimated at 80-95%.

Heliostar CEO, Charles Funk, commented: “The 2021 program continues to deliver, showing the SH-1 Resource is just one of many high grade targets within the Unga district. These results build on those from earlier in September at Aquila and define a new zone with intercepts from surface that are wide open for expansion. Systematic exploration is proving very successful to unlock the Unga District and more assay results are pending from this year’s program, including from the SH-1 Resource and Apollo targets. Planning has commenced for drilling at Centennial in November and December due to the ability to drill year-round on parts of the project.”

The Aquila Target comprises outcropping epithermal quartz veins within the Shumigan vein corridor located 5 kilometres southwest of the SH-1 Resource (384,000 inferred ounces of gold at 13.8 g/t gold). It is one of the four highest priority targets on the Unga project (Figure 1) amongst 38 areas of either mineralization, mineralized outcroppings, historical resources and/or anomalies. 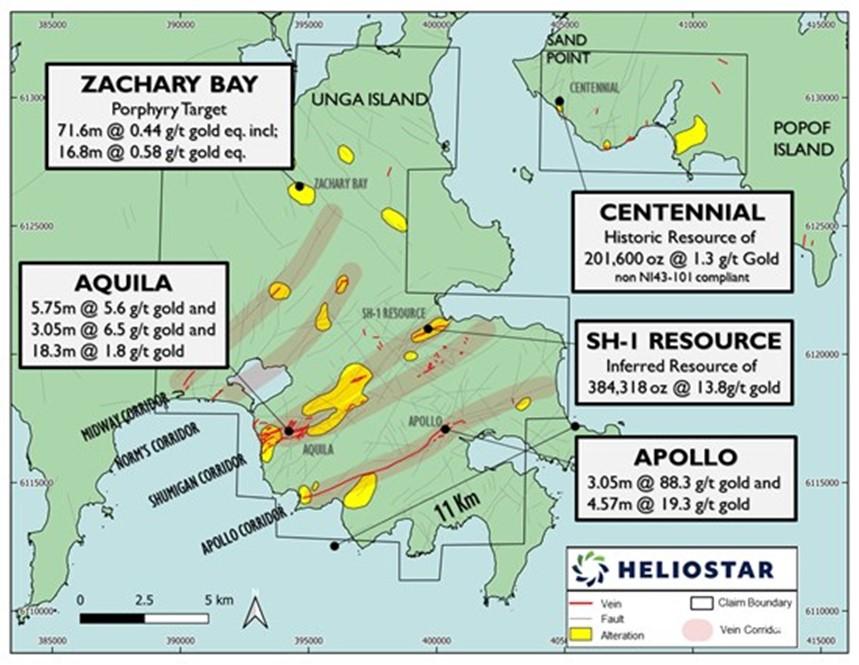 Figure 1: Plan Map of Unga District with highest priority targets highlighted. The reader is cautioned that a Qualified Person has not been able to independently verify the resource at Centennial and Heliostar plans on conducting an exploration program at Centennial to establish the grades and widths of mineralization at these prospects. The SH-1 resource is current and is referenced in the “Amended and Restated N.I. 43-101 Technical Report & Resource Estimate for the SH-1 Gold and Silver Deposit” by W.T. Ellis, dated November 24, 2020, and which can be found at www.sedar.com.

In 2021, thirteen RC holes were completed at Aquila; all intersected the Amethyst Vein (Figure 2) which now has a drill defined minimum strike length of 475 metres. Two separate zones along the vein contain higher-grade gold mineralization and both remain open for expansion with follow-up diamond drilling.

New results from drill holes AQRC21-12 and 13 are step-out holes and were drilled 80 metres and 120 metres to the northeast of the discovery hole AQ20-01 (4.46 g/t gold over 3.6 m and 2.24 g/t gold over 17.37 m). In total, five holes define a zone of continuous mineralization that is at least 120 metres long and that remains undrilled and open to the northeast and at depth. Surface samples returned up to 30.8 g/t gold to the northeast that are yet to be drill tested.

Heliostar performed all 2021 drilling at Aquila with RC and the deepest drill intercept to date is only 70 metres below surface. Mineralization is open at depth with the expectation that there is a significant window for mineralization down-dip. 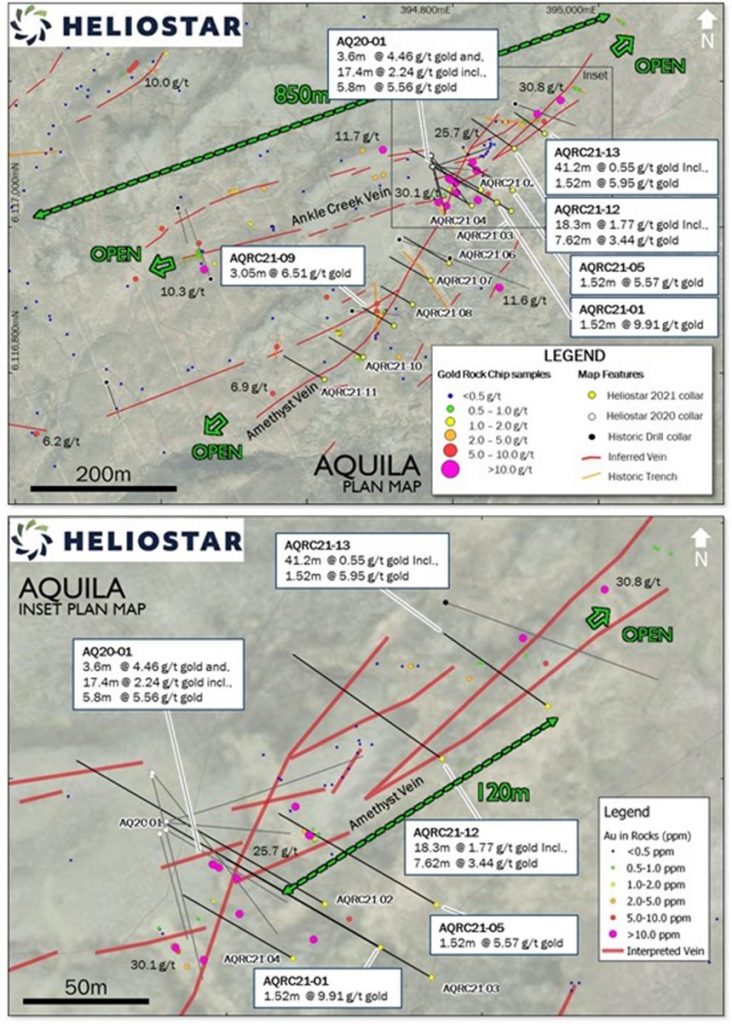 The company interprets that the current drilling as being at only at the top of the mineralized system. The geological evidence of a high gold to silver ratio, high precious metals to base metal ratio, relative elevation of Aquila to SH-1 and Apollo and specific quartz textures observed within the veins indicates a shallow level within the system. At Apollo, mineralization was defined over 500 metres vertically and drilling at SH-1 has defined high grade gold over 250 metres vertically that remains open at depth.

Heliostar’s geologists infer that the Aquila target has excellent potential for further expansion.

It is also important to note that gold mineralization becomes thicker to the northeast, around drill holes AQRC21-12 and 13, indicating that the gold mineralizing system may be becoming more robust in this direction. This area is a major intersection of the regionally significant northeast striking Shumagin Vein Corridor and several east-west striking veins. Vein intersections often form the basis for gold rich shoots within the veins which is looking likely in this zone at Aquila.

Table 1: Table of significant intersections from Aquila. True thickness is estimated at 70-95% of downhole lengths. * Denotes a hole that has previously been released