Heliostar Metals Limited (TSX-V: HSTR) (OTCQX: HSTXF) (FSE: RGG1) is pleased to announce results from the first four drill holes completed at Unga in 2021. The company has three drill rigs on the project and has completed 36 holes for a total of 4,245 metres to date.

Heliostar CEO, Charles Funk, commented: “These are exceptional results and this discovery at Apollo adds another high grade zone to the Unga project. Apollo was Alaska’s first underground gold mine and despite historical reports of continuations of gold and base metal mineralization beyond historic workings, Heliostar is the first company to successfully intersect these veins in drilling. The Apollo-Sitka trend is over two kilometres long and drilling completed to date in 2021 has tested just 725 metres of the trend, with additional assays pending. The company is undertaking a 7,000 metre, fully-funded program with a goal of demonstrating the current resource (384,000 inferred ounces at 13.8 g/t gold1) can grow to greater than 1,000,000 ounces of gold.”

The historic Apollo Mine produced approximately 130,000 ounces of gold at an estimated grade of 10 g/t. Ore is reported to have been mined from three closely spaced, parallel veins2. The Apollo vein transitions from gold rich at shallow levels to gold with silver and base metals at depth.

2 – The reader is cautioned that the qualified person has not been able to independently verify the historical assay results presented above and Heliostar’s current drilling is designed to establish the grades and widths of vein targets on the property.

Mining from 1886 through to the 1920s exploited the gold-rich, oxidized portion of the Apollo veins. However, unoxidized precious- and base-metal-rich zones were left unmined due to the lack of flotation technology to treat sulphide ore. That technology was developed later and has remained industry-standard for multiple decades.

Exploration during the life of the mine comprised shaft sinking, drifting, and cross cutting to discover veins at three main zones: Apollo Shaft 1, Apollo Shaft 2, and the Sitka Mine (Figure 1). Historic reports note that many drifts and crosscuts encountered veins with gold, silver, and base metals which were not followed up with drill testing.

The Apollo prospect remained largely unexplored until the 1980s, when fourteen holes were drilled to test the area north of the vein defined by historic underground workings. However, this drilling appeared to miss the main zones of mineralization and the project saw no further drilling until Heliostar completed seven holes in late 2020.

Heliostar geologists noted inaccuracies in the historic mine drawings and locations of the 1980s drillholes in the field convinced them that these holes had not adequately tested the main Apollo-Sitka vein corridor. 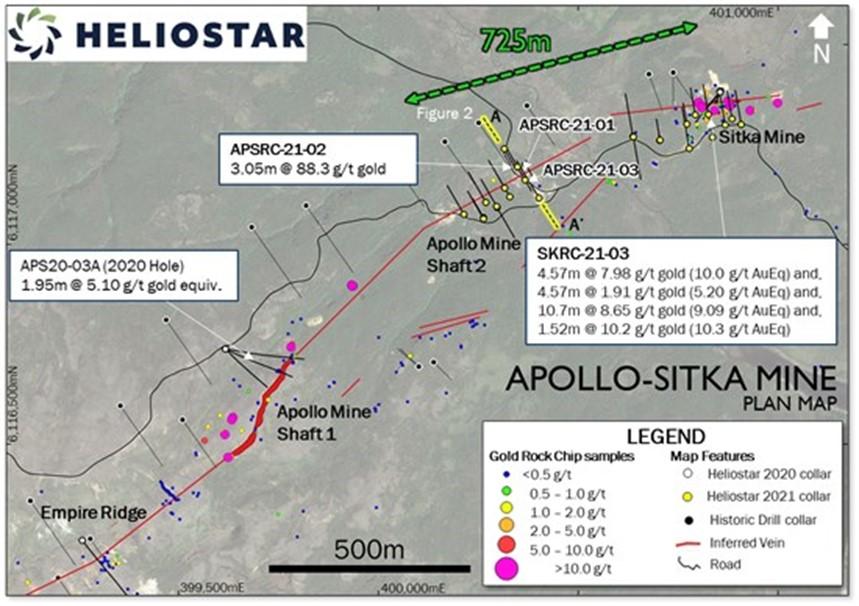 Figure 1: Plan map showing location of the Heliostar and historic drilling at the Apollo prospect.

For 2021, Heliostar planned fences of reverse circulation (RC) drillholes to accurately locate the vein, with exploration drilling then to step-out along strike to expand the lateral footprint of mineralization.

Hole APSRC21-01 intersected a broad zone of intense clay and pyrite alteration, indicating proximity to a major structure. Hole APSRC21-02 intersected the vein on the same section (Figure 2). APSRC21-03 drilled back and across the vein near to the APSRC21-02 intersection and drilled through same vein but returned a low-grade interval. This grade variability is similar to that noted in drilling at the SH-1 resource. This variability is assumed to be the result of coarse-grained gold and screen fire analysis is being completed on each hole to address this variability.

Step-out drilling intersected at least three parallel veins between Apollo Shaft 2 and the Sitka Mine. Veining is composed of quartz with minor clay and variable amounts of sphalerite, galena and chalcopyrite. Visible gold was observed in RC chips from the high-grade interval in hole APSRC21-02.

The team completed one diamond drillhole, APS21-08, before the rig was moved to the SH-1 resource area and this hole intersected the Apollo vein 40 metres downdip, where it remains open to depth and along strike.

The company has completed 36 holes for a total of 4,245 metres since mobilizing to the property in April. There is one diamond and two RC rigs on site that are rapidly advancing the drilling program and the company expects to exceed the planned 7,000 metres within the current C$6,000,000 budget. 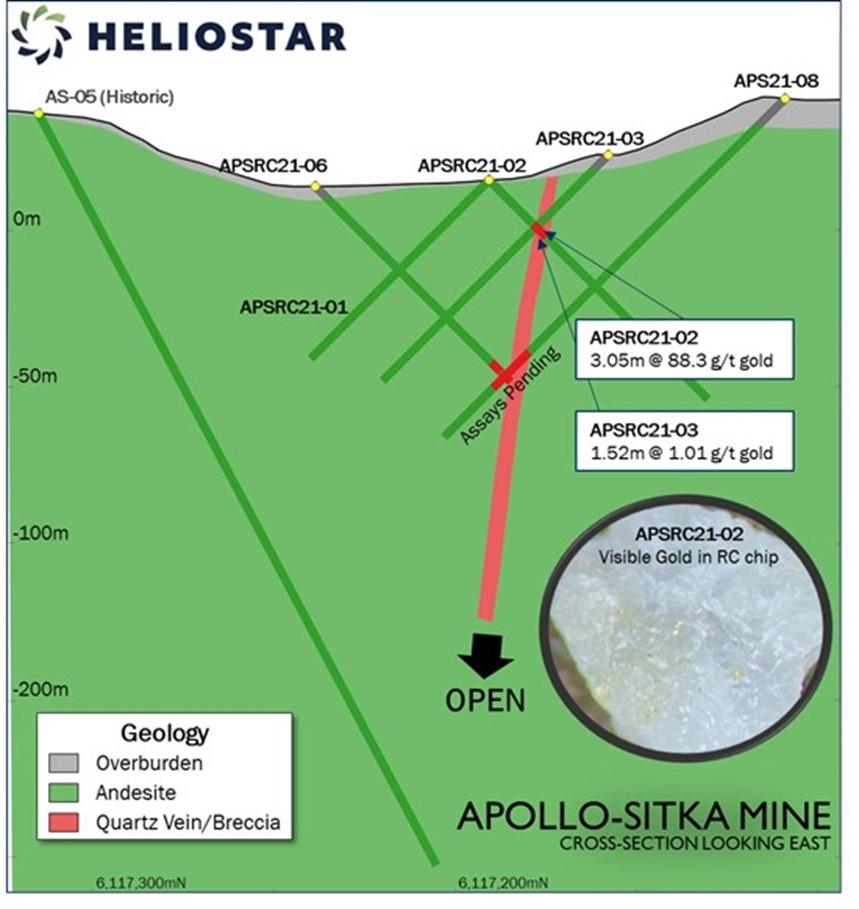 Figure 2: Plan map showing location of the Heliostar and historic drilling at the Apollo prospect.

Five holes, including two twin RC holes for comparison to 2020 diamond holes, have been completed at the SH-1 Resource area (384,000 inferred ounces at 13.8 g/t gold) where company is utilizing the diamond drill rig to define extensions to known mineralization. Historic hole BM-1 is the deepest hole in the resource and intersected 5.48 metres grading 23.99 g/t gold and mineralization is open to depth.

Within the broader Apollo area, the team has completed 27 drill holes. Mineralization remains open in all directions and drilling is aiming to expand the footprint of mineralization of the multiple parallel veins.

Aquilla is another priority target at Unga. The team has completed four holes to follow up the discovery of the Amethyst Vein in 2020, with all 2021 assay results pending. Drilling of this vein in 2020 returned 31.6 metres at 1.8 g/t gold, including 5.75 metres at 5.56 g/t gold, from hole AQ20-01. Each of the four new holes have intersected the vein at depth and along strike, and drilling remains ongoing.

In addition to the priority projects, Unga hosts many additional high-grade gold vein, bulk-tonnage gold and porphyry copper-gold targets. Company geologists continue systematic exploration to advance these targets to be drill ready and some of these targets will be included in the latter part of the 2021 drilling program. 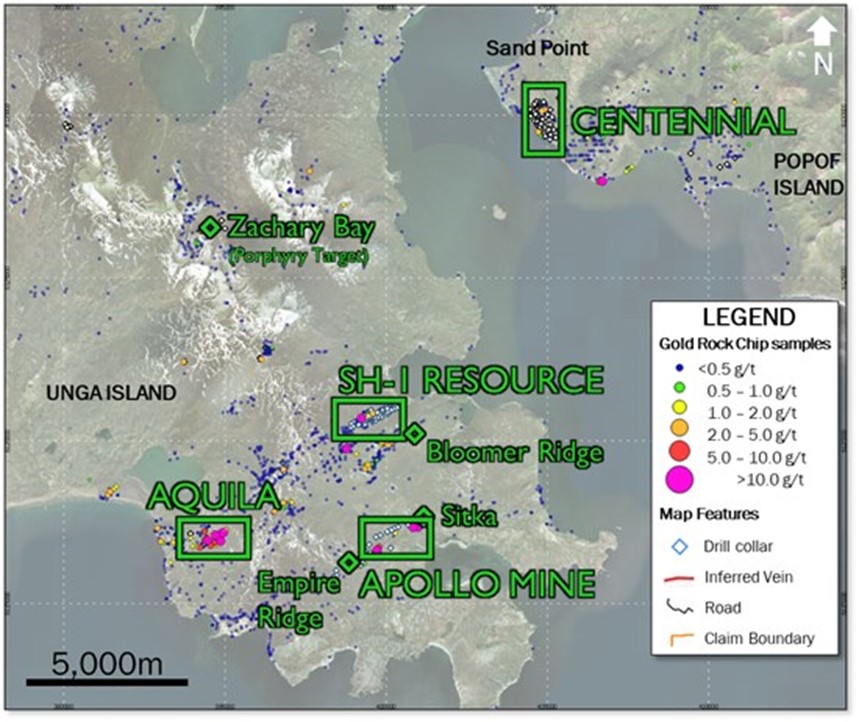