In connection with the Offering, the Company’s common shares were listed on the Canadian Securities Exchange effective Thursday, April 15, and the Common Shares are expected to begin trading on the CSE under the symbol “HM” on Monday, April 19, 2021.

PI Financial Corp. acted as the lead agent for the Offering. In consideration for the services provided to the Company, the Agent and members of its selling group received: (i) a fee equal to 8% of the gross proceeds of the Offering; (ii) a corporate finance fee of $25,000; and (iii) 600,000 non-transferable compensation options, each Agent’s Option exercisable into one Common Share at a price of $0.15 per Common Share until April 16, 2023.

Expenditures totaling approximately $157,000 have been made on Romeo to date. Of this work, around $115,000 was completed by Hawkmoon in two phases. In 2019, Hawkmoon followed up on a previous airborne survey completed by the Property vendor. This airborne survey identified a series of time domain electromagnetic anomalies. Hawkmoon verified each TDEM anomaly and measured the total magnetic and electromagnetic fields locally. The Company then commissioned a NI 43-101 Technical Report titled “NI 43-101 Technical Report on the Romeo Property” by Gordon Henriksen P.Geo.

Hawkmoon then completed a second work program on Romeo in 2020. This work program included soil sampling in the southwestern area of Romeo as well as a trenching program in an area of mafic volcanics in the eastern area. This trenching led to discovering a series of five parallel shear zones in the eastern portion of the Property. The shear zones are generally zoned with high amounts of pyrite, silica and chlorite altered volcanic and intrusive rocks. The Report was updated following this 2020 exploration program. A copy of the Report is available under the Company’s profile on SEDAR at www.sedar.com. Hawkmoon plans to continue work on the Romeo project this summer and is looking forward to starting the next phase of work.

“Founding Hawkmoon Resources has been a long-term goal of mine. Years of experience in the mining exploration space have taught me the necessary skills to succeed in the capital markets. As CEO of a new company, I value the input and guidance from our talented management and advisory board. Moreover, I firmly believe providing transparency and consistent communications with investors, stakeholders and partners will be the key to success for Hawkmoon Resources.” stated Branden Haynes, CEO of Hawkmoon Resources. “Now that Hawkmoon Resources is a public company, we wish to thank everyone that has supported the Company during the last two years,” added Mr. Haynes. 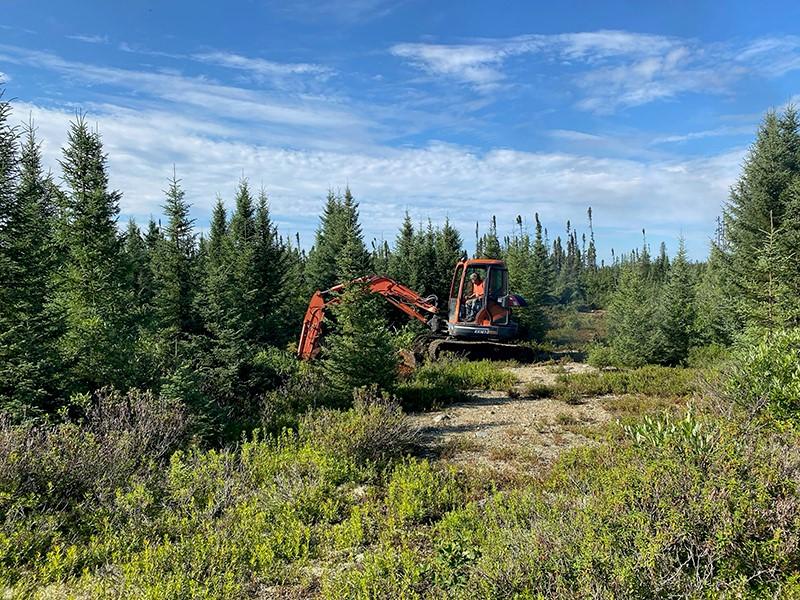 Hawkmoon Resources’ Romeo property is surrounded by Osisko claims on three sides. Romeo’s bedrock geology is composed primarily of intrusive rocks with local amounts of volcanic and metamorphic rocks. The intrusive rocks of most interest are diorite. It appears the Bank Fault, as identified by Osisko Mining, crosses the Romeo Property. The 2020 work program completed by Hawkmoon appears to have identified a surficial expression of the Bank Fault at the “Fourty Foot Shear” outcrop.