Hawkmoon Resources Corp. (CSE:HM) (FSE:966) is pleased to announce the commencement of its 2021 summer exploration program on the Romeo Gold Project. Romeo is situated approximately 200 kilometres northeast of the city of Val-d’Or, Québec. Access to the Property is excellent by a two hours drive on well maintained government roads east of the town of Lebel-sur-Quévillon. The road to Romeo also crosses Hawkmoon’s Wilson property. Once the work on Romeo is complete, Hawkmoon will shift its work to Wilson.

The Program will focus on the area where Hawkmoon discovered a series of five parallel shear zones in August of 2020. The southernmost of the Shears, the fourty-foot shear, appears to be a possible surficial expression of the regional scale Bank Fault identified by Osisko Mining on its neighbouring Windfall property. The Company is focusing on the area between the fourty-foot Shear and the Property boundary to the south. The bedrock geology is favourable, being composed of basaltic volcanic rocks and gabbro intrusives. These rocks have been moderately to strongly sheared locally into a chlorite schist. The Program will include outcrop clearing, trenching and sampling in this prospective area of Romeo.

Mr. Branden Haynes, President of Hawkmoon states “We are all excited to start our extensive summer exploration work program on our Quebec gold projects. Hawkmoon decided to commence such work at the Romeo Property, as the shears discovered last summer are promising. After completing the Program, Hawkmoon intends to complete a surface program and drill 5,000 metres at Wilson.” 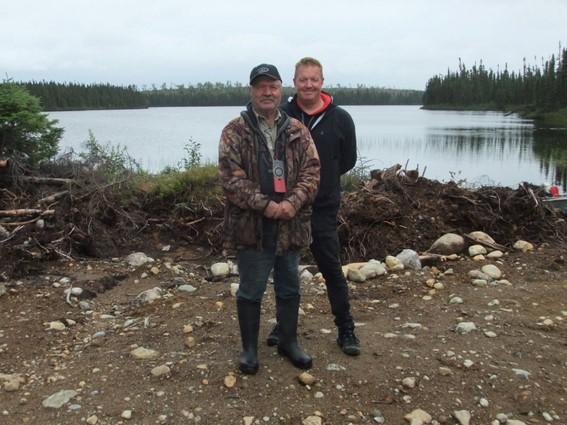 Photo is of Mike Lavoie, a prospector from Val-d’Or and Hawkmoon’s VP of Exploration, Thomas Clarke.

Hawkmoon is focused entirely on its three Quebec gold projects. Two of these projects are in one of the world’s largest gold deposits, the Abitibi Greenstone Belt. Both these gold projects are accessed by government-maintained roads and are in close proximity to each other east of the town of Lebel-sur- Quévillon. The third project is situated in the Belleterre Gold Camp southwest of Val-d’Or.