Hawkmoon Resources Corp. (CSE:HM) (OTCQB:HWKRF) (FSE:966) has received the final assay results for all ten drill holes from its 2021 drill program on the Lava gold project. The Property is situated approximately 20 kilometres west of the town of Belleterre in the Abitibi-Timiskaming region of Québec and approximately 110 kilometres southwest of the city of Val-d’Or, Quebec.

Highlights of the Holes Disclosed in this News Release

The drilling encountered a broad zone of sheared diorite.  The LSZ is present within the Alteration Zone measured 2.7 to 11.8 metres in downhole thickness.  The LSZ has been injected with quartz veins that range from 0.1 metres to 2.0 metres in width.  Disseminated to semi-massive sulphides occur as bands up to 10 centimetres wide within and along the margins of quartz veins.  Gold values within the LSZ reached a maximum of 16.05 g/t Au over 20 centimetres in LA21-49. A higher content of sulphide minerals appears to generally lead to higher gold grades.

Table 1 highlights certain gold assays received for the Holes. The results represent down hole lengths and not necessarily true widths. Figure 1 shows a map of the drilling. A photograph of the core is shown in figure 2. 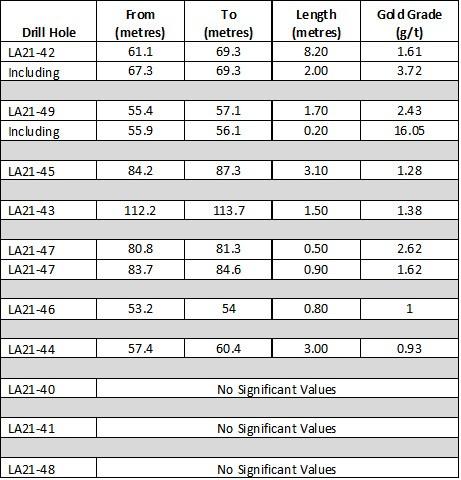 Branden Haynes, President of Hawkmoon, states “We are pleased with these initial drill results.  Applying the 2D-modelling to the previous geophysical data provided high confidence, low cost targeting for the drill program.  The gold-bearing intervals intersected by the drilling bear-out this approach which can be applied to other geophysical targets on the Lava Property.” 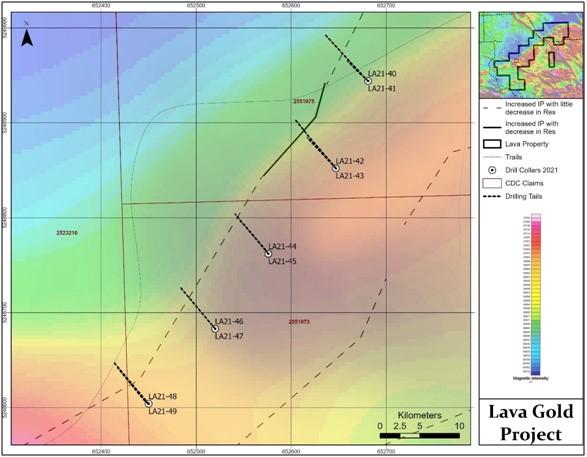 Figure 1: Map of the drill holes and total magnetic field

The gold results reported in this press release were obtained from core samples delivered in person to Bourlamaque Assay Laboratories Ltd. in Val d’Or, Quebec for analysis.  One blank and one certified reference material standard were included in every 20-sample batch of samples.  The samples were crushed to a minimum 70% <1.7-millimetre, riffle split to 250 grams and then pulverized to a minimum 85% <75 microns.  Sample pulps were analysed for gold by classic 30-gram fire assay, atomic absorption spectrometry finish with a lower reporting limit of 0.01g/t Au (Bourlamaque Code AU020-SAA 30g).  Sample returning >10g/t Au were automatically re-assayed by FA-gravimetric finish.

Hawkmoon is focused entirely on its three Quebec gold projects. Two of these projects are located in one of the world’s largest gold endowed areas, the Abitibi Greenstone Belt. Both these gold projects are accessed by government-maintained roads and are in close proximity to each other east of the town of Lebel-sur-Quévillon. The third project is situated in the Belleterre Gold Camp southwest of Val-d’Or.