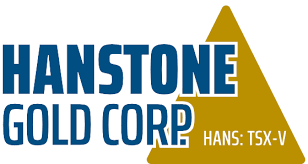 Hanstone Gold Corp. (TSX-V:HANS) (OTC:HANCF) (FRA:HGO), is pleased to announce that it has received assay results from its recently completed bulk sampling program at its Doc Property in northwestern British Columbia, previously announced on October 31, 2022.(1)

A total of 18 sample pits were opened on the Property, with 17 pits located along the DOC area (Q17/Q22 vein zone) and one pit at the Q19 zone. The bulk sampling component of the program consisted of a series of four (4) bulk samples taken across the Q17 and Q19 vein zones. The specifications and assay results of each sample are shown in the following table (Table 1). Each sample at both the Q17 and Q19 veins consisted of abundant galena and minor pyrite mineralization within 0.5 to 1.0 metre quartz veins, hosted within a broader shear zone and yielded anomalously high gold and silver values. No significant copper or zinc values were encountered.

Analytical results of sampling reported by Hanstone represent rock samples submitted by Hanstone directly to Seacan Labs, an ISO 17025 accredited lab based in Stewart, British Columbia. Bulk samples were coarse crushed and divided into 5 kg samples, dried at 100 °C, crushed to 80% < 10 mesh, split, with 250g pulverised to 85% < 140 mesh. For Au and Ag, 30g pulp was fire assayed with gravimetric finish. For all other elements, pulp samples were digested by aqua regia and run by ICP-OES.

“The Hanstone team is excited with the results from the trenching samples. In conjunction with the drilling results from our successful 2021 program, we feel this verifies that the system indeed goes to depth to the adit level, at minimum. Our ongoing efforts next season at the DOC Zone will be to establish the full extent of the Q17 and Q19 veins. With no major truncating structures identified yet, the system appears to extend further in both strike length and depth. These high-grade samples speak for themselves and could be the potential of something much bigger than first thought,” stated Ray Marks, President & CEO of Hanstone.

About the DOC Gold Project

The DOC Gold Project covers 8 mineral claims covering 1,704 hectares in northwestern British Columbia. The Project is located approximately 70 kilometres north of Stewart, BC, and is accessible by a 45 minute helicopter flight from the helipad located in Stewart, BC. Trails provide excellent access to all major locations on the Property.

Technical information in this news release has been reviewed and approved by Case Lewis, P.Geo., a “Qualified Person” as defined under NI 43-101 Standards of Disclosure for Mineral Projects.

Hanstone is a precious and base metals explorer with its current focus on the Doc and Snip North Projects optimally located in the heart of the prolific mineralized area of British Columbia known as the Golden Triangle. The Golden Triangle is an area which hosts numerous producing and past-producing mines and several large deposits that are approaching potential development. The Company holds a 100% earn-in option on the 1,704-hectare Doc Project and owns a 100% interest in the 3,336-hectare Snip North Project. Hanstone has a highly experienced team of industry professionals with a successful track record in the discovery of gold deposits and in developing mineral exploration projects through discovery to production.