Summer or not, these are interesting days. From last week’s tariffs and trade threats to the weekend’s G7 talks, photos, tweets, communiques, rescinded communiques, and general confusion, we now get to move on to the summit in Singapore, the next set of US inflation data, the Federal Reserve’s big meeting and likely rate hike, and a European Central Bank meeting with potential for taper talk.

I can’t imagine a busier week in terms of forces acting on gold!

The Fed will hike. The unknown is how hawkish they will be in their statement and dot plots. If they project another two hikes this year, for four altogether, the US dollar will gain and gold could well slip – or at least not enjoy another post-hike rally, which is what I expect if the hike is accompanied by more dovish language. The inflation data due out tomorrow will probably play a big role in determining which way that will go.

Then there’s the ECB – an announcement of bond purchase tapering would be a bit early and somewhat unexpected, especially given recent weak data from the continent plus the situation in Italy, but it might yet happen. That would boost the Euro, aiding gold.

Given all the run up and the stakes at hand for both participants, I have to think the summit in Singapore between President Trump and Kim Jong-Un of North Korea will produce some kind of progress. I’m not suggesting Kim is going to agree to disarm, but both leaders would lose face walking away from this empty handed. Still, we are talking about Trump and Kim…so truly anything is possible.

Gold is as steady as ever as the market awaits outcomes from all of this. Base metals, in the meantime, seem to be gaining real traction, and for real supply-demand reasons. I talked about copper last week. This week for Maven Monday I’m including my comments on uranium from last week’s letter, which is another sector starting to attract attention.

It’s been a while since I’ve written about uranium, but I continue to be a shareholder in Uranium Energy (NYSE: UEC) and NexGen Energy (TSX: NXE). Like other key resources, the idea that there is not enough uranium ready to meet demand in the long-term remains in play. However, I am careful here as being early is the same as being wrong. I haven’t yet seen enough signs of life to bring me back to uranium, but that’s starting to change.

In a Uranium Sector Update from May 8, 2018, Haywood analysts wrote that this is “the best fundamental position we have seen since pre-Fukushima”. The demand side is looking good as the global reactor pipeline is “now exceeding the pre-Fukushima level” and the supply side finally looks like it is figuring out how to squeeze a rally out of the spot market, with prices now rising for the third time in a year.

We haven’t seen a significant lift in uranium term prices yet, but it may be coming. 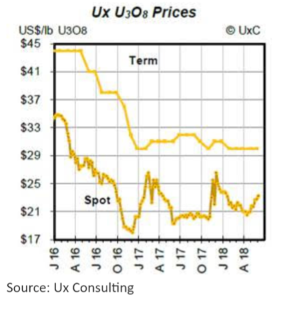 Uranium was notoriously over-supplied following the Fukushima disaster in 2011. That oversupply combined with extremely negative sentiment towards the sector to decimate prices over the next six years.

The oversupply situation started to change when Kazatomprom made its first major production cut in January 2017, reducing output by 10% or 5 million lbs. per year. That was a really important move because for years – decades even – Kazatomprom had focused solely on gaining market share. To cut production was an important signal that a sector leader was going to act on the part of producers to turn this sliding market around.

Other producers agreed and the cuts have continued since then, with Cameco suspending operations at the world’s largest uranium mine in November 2017 and Kazatomprom cutting another 10 million lbs. of annual production shortly thereafter, plus reducing output by 28 million annual lbs. over the following 3 years. And just last week the Kazaks took it a step farther, announcing plans to cut annual output by another 5 million lbs.

The Kazak cuts keep coming. As for Cameco, when it suspended MacArthur River last November the company said it would wait for 10 months and see if prices were strong enough to justify resuming production. Haywood estimated the hurdle was approximately $40/lb. Term prices remains below that level.

Meanwhile, Cameco has been reducing inventories and even communicated that it would buy in the spot market to meet forward sales if needed. A recent note from Canaccord on the uranium spot market mentions, “All buying groups… have been active seeking material across a wider spot delivery period…”  How much of this buying is coming from Cameco? How contrarian-bullish is it when a major producer starts buying back its own production?

You can see the effect of these cuts in uranium prices, as below.  The Long Term price was declining in the months going into January and November/December 2017, but the cuts stopped the downward moves in the Long Term price and drove rallies in BAP afterwards.

These production cuts also make for great “event studies” in uranium stocks. One such event is happening now, following Kazatomprom’s latest cut on May 31st, 2018.

See UEC trading up to $1.80 in the week following the news? Look back to the rally in UEC shares around January 2017, where prices ran from $0.90 to $1.80 range in Q1 2017 – that came after the first Kazatomprom cut.  Then, the move from $1.10 to almost $2.00 in November 2017 followed the news from Cameco and Kazatomprom again. These past rallies largely retraced, but not entirely.

This stock has given lots of opportunities for good buying and selling. From a bigger picture perspective, these responses to supply cuts show that the market knows uranium is setting up for an opportunity and at least some investors, not wanting to miss out on the start of a rally, get in each time news hits.

The latest move is just getting started. How much further will it go? We are seeing an uptick in uranium spot prices, but not enough to get really excited. Yet. 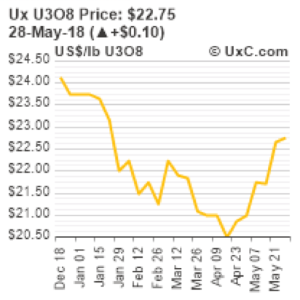 I will briefly mention a new company called Yellow Cake, which is planning an IPO on the AIM. They secured a long-term contract with Kazatomprom to buy “one quarter of Kazatomprom’s annual production and approximately 5% of 2016 global marketed production” for price of US$21.01 per pound.

The deal gives Kazatomprom another way to cut production – by selling into a fund that will just hold uranium. The team behind Yellow Cake thinks the uranium price is structurally wrong – far too low – and so their vehicle will hold physical uranium and will buy uranium royalties and streams. For investors, it will provide a low-risk investment option similar to Uranium Participation (TSSX: UUU), which similarly just holds physical uranium. For the market, it removes even more supply and re-affirms Kazatomprom’s commitment to reducing supply to strengthen the price.

New buyers in the uranium are not the only wildcard out there, either. A group of US uranium producers are lobbying the US government for a tariff on imported uranium. Given all the noise in the US these days about the risks of relying on imports of critical metals, a tariff to encourage domestic production doesn’t sound unreasonable, does it? Just imagine what that would do to UEC.

The key sign I’m watching for is evidence of utilities signing new long-term supply contracts at prices sufficient to support new mine development. That is not happening yet, but it may be close. May 2018 had the third-highest monthly volume on record in the uranium spot market, with a reported 36 transactions representing 7.4 Mlbs. That’s not far from the 10 million lbs. that Kazatomprom cut over the entire year of 2018. The term uranium market was less active, but the increased spot activity is a good sign for the uranium market as a potential precursor to price increases and new long-term contracts.