It was a busy week in the gold space and the price responded accordingly: 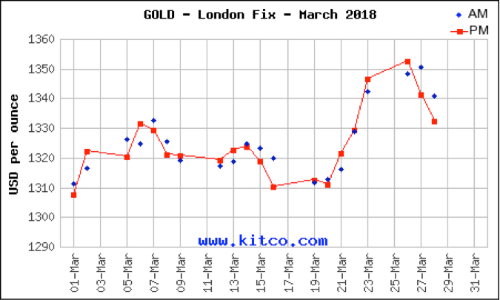 The big move up came after the Federal Reserve boosted interest rates. Soon after, the US-China trade war ramped up with the US announcing tariffs on Chinese goods and China immediately retaliating. And then President Trump appointed known aggressor John Bolton as his new national security advisor.

I commented on the rate hike last week and just a few notes to add here. The first is this chart:

This is the latest GDP prediction from the Federal Reserve. They see real GDP growth rising to 3% this year before drifting back to around 2% in the long run. And that mediocrity is enough for them to remain reasonably hawkish, guiding two more rate hikes this year.

It’s yet another aspect in the endless debate over where this economy and bull market are going. The economic data are so mixed, bullish in one report and bearish in the next. I still see reliable – if not robust – growth in the US. But does that justify these sky-high stock market valuations? 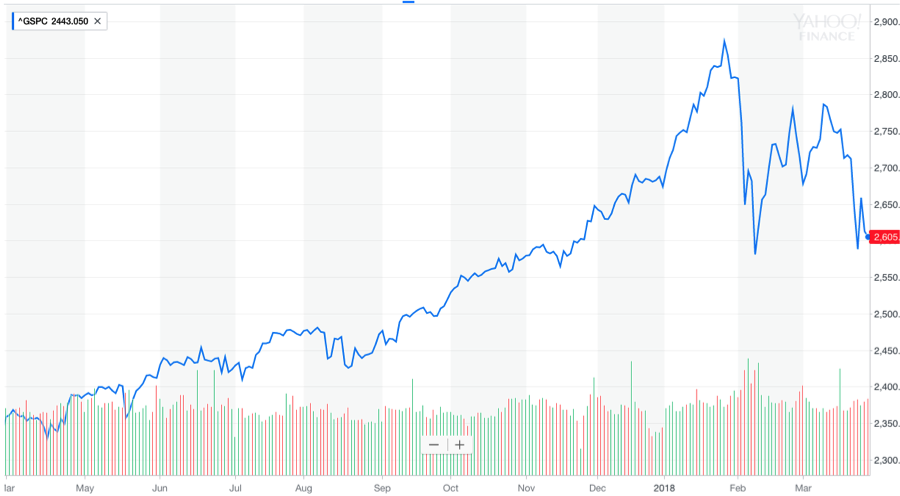 That’s about the worst that a one-year chart of the S&P has looked for a long time! Uncertainty abounds, around valuations and growth, around politics and tariffs, around currencies and trends. There is one certainty amidst that much confusion – gold. 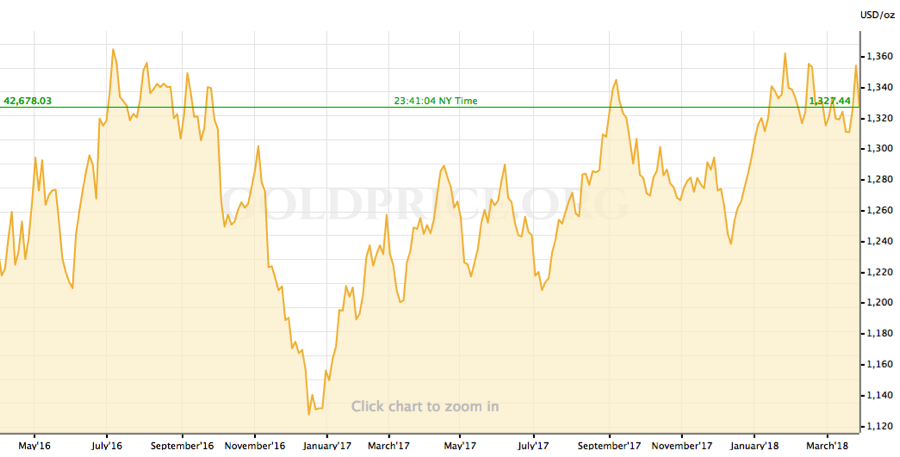 Yes, gold came off strongly in late 2016 – but since then the yellow metal has done darn well. I still expect seasonal weakness to hinder the price in the near term, but I think late summer and fall will bring about the next leg up in the gold market.

As for tariffs and protectionism, I don’t dare predict how this will play out in the near term. I’ll start by noting that rising tensions between the US and Russia matter, in that America can’t really carry out a cold war with both Russia and China at the same time. The thing is, at this point I don’t know which will take precedence! And I doubt Trump does either.

Should these threatened tariffs all play out, what I will say is that the biggest loser will be the US dollar. Protectionist measures against trade partners only ever weaken a reserve currency, as Trump will find out. US tariffs on Chinese goods devalue the purchasing power of the dollar for that product. With less purchasing power, demand drops. And with declining US demand for its products, China would have less reason to hold US dollars. From all angles, tariffs work for a weaker dollar.

Tariffs are by no means the only force working against US Treasuries. China and Russia are already buying less, with their joint holdings down by $50 million from August to January. They are buying fewer Treasuries for two reasons: to demonstrate their power over the US dollar and because they won’t need as many going forward.

Why are their needs declining? Monday provided part of that answer, with the launch of an oil futures exchange in Shanghai priced in renminbi. As soon as the commodity derivative started trading, Asia’s largest oil refiner, Sinopec, announced a deal with a western oil major to buy Middle East crude priced in yuan.

This all matters because for decades oil has been priced and traded in dollars and only dollars. That system created immense demand for greenbacks, as oil importers needed dollars to buy energy.

The new yuan-based oil futures contract is a direct challenge to that. It gives those making oil deals the choice to price their contracts in dollars or yuan. As pricing in yuan rises, demand for dollars will decline.

And when I say dollars, I also very much mean Treasuries. Oil exporters store their revenues from oil sales in Treasury bonds. It is known as petro-dollar recycling and it represents a key source of financing for US deficit spending.

And unless you’ve been avoiding the news, you know that US deficit spending is on the rise. The federal government is on track to borrow nearly $1 trillion this fiscal year, almost double what it borrowed in fiscal 2017.

That means America needs to sell more Treasuries going forward, not fewer. That was already going to be a challenge given that the Federal Reserve is rolling off its Treasuries, rather than buying. But add in reduced demand from oil traders – buyers and sellers – and less buying from China itself, on principle and because of reduced need, and the US is likely going to struggle to sell enough Treasuries to support its deficit spending. To entice buyers it will have to offer higher rates, which only increases its deficit.

That is a fundamental challenge, one that undermines the US dollar in a serious way. And that helps commodities.

The savvy investor right now is looking around and seeing the return of volatility, rising uncertainty over valuations, and threats to the US dollar. However, there is still good reason to believe the bull market still has legs.

Global growth is real – like US growth, it may not be robust but it is real. And it is synced up for the first time in a long time. A declining dollar actually helps that by supporting emerging economies, which generally carry high debts denominated in US dollars. And very low unemployment in the US means people have money to spend – not a lot, as wage growth remains very limited, but enough – and that is very significant in an economy that gets some 70% of its value from services.

Also, long strong bull markets rarely die quickly. There are certainly chartists out there already arguing that we’ve seen the top, and perhaps they are correct. Continued weakness in the next few days would be notable, especially if it pulls markets back below their February lows. If instead things recover, I would say the basic argument that long markets have drawn-out tops suggests things ain’t over yet.

In that context, what does the savvy investor do? She looks for value. And she finds it in trades set to benefit from dollar weakness and synced-up global growth, especially if those trades are fundamentally undervalued.

You can see where I’m going with this. The bull argument for commodities is still looking strong. If the broad markets fail to recover from recent weakness, things could yet derail, but I don’t see convincing reason to change tact at this point.

So stick with the metals and mining stocks that you believe in. Hold base metal stories for their leverage to global growth, dollar weakness, and in many cases insufficient supplies. Hold gold stories for their leverage to uncertainty and dollar weakness. Play within the risk profiles that are appropriate for you – lower risk producers for those with lower tolerance and less engagement with the sector, higher risk explorers for those willing to take on more risk keep up to speed.

And think about the news from 20,000 feet. What will it do to global growth? What will it do to the dollar? What does it add to uncertainty? And does it signal the end of the big bull market? Because those are the questions that really matter.