The Federal Reserve did exactly what I (and the rest of the market) predicted and cut raise by another quarter point this afternoon.

Since it was widely anticipated, the cut itself was not newsworthy. What people were watching closely instead was what else Mr Powell had to say.

Alongside the cut came a statement summarizing the Federal Open Market Committee’s (FOMC) two-day meeting. Long story short, the FOMC thinks they’ve done a great job this year and therefore we should expect rates to stay where they are unless something significant changes.

Seriously: “We see the current stance of policy as likely to remain appropriate as long as upcoming information about the economy remains broadly consistent with our outlook.” So we’re good unless we’re not good…thanks, Mr Powell.

I joke, but it’s actually a fair response given the situation. After markets tanked in late 2018 the Fed had to respond. Respond they did, and markets recovered.

The thing is, the factors they are actually supposed to respond to – unemployment, inflation, and GDP growth – barely changed through this set of rate cuts. 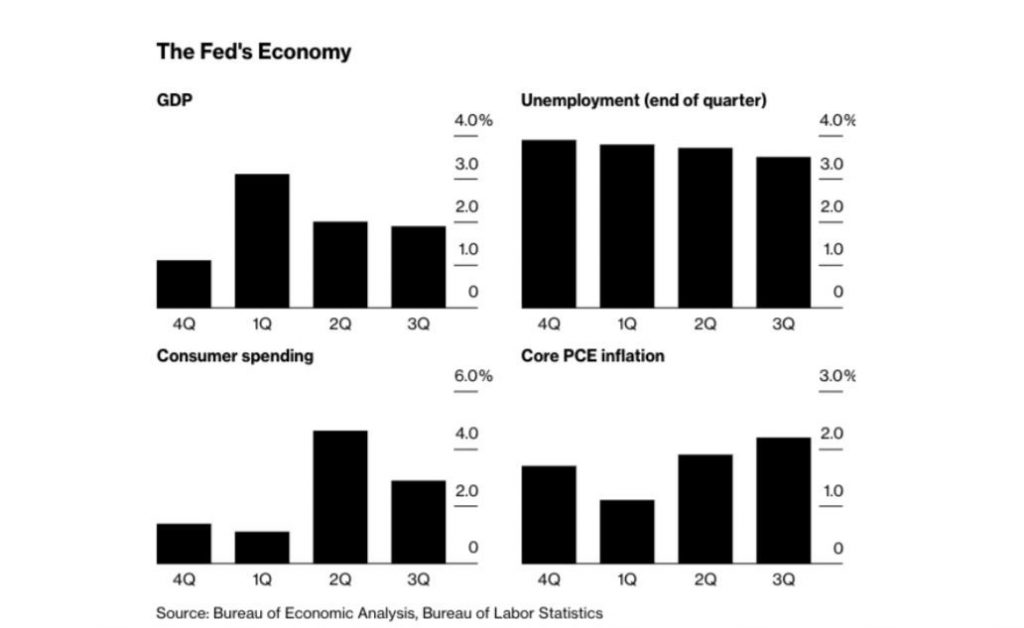 GDP growth is the one that is noticeably weak, but it has been weak throughout this economic recovery and yesterday’s Q3 number surprised with its strength (1.9% versus 1.6% expected). Meanwhile unemployment is historically low and inflation is stable. Exports and business investment are down but consumer spending has remained fairly consistent.

The Fed’s move to lower rates likely helped keep the economy marching along like this, as much because lower rates encourage stock market gains as for the resulting lower costs to finance debts. The reason there: businesses are simply more likely to invest in capacity and employees when their share prices are strong.

But let’s be honest: the biggest impact from lower rates was getting the stock bull market back on track. Now that it is firmly there – the S&P is at an all-time high – team Powell can congratulate themselves on a job well done.

What now? Unless something significant changes we’re looking ahead to no further rate cuts for a while, which means no more rate-cut runups for stocks, and a trade war with no end in sight. Trump and Xi were supposed to meet at the APEC summit next month to sign the Phase One deal…but now APEC has been cancelled in light of the major protects in Chile and so, unless Trump and Xi rearrange things, their meeting is cancelled. Besides, the Phase One deal only addresses agricultural products that each side really needs; it doesn’t begin to touch the difficult issues, which will drag on US growth unless they are resolved.

And while things – GDP, industrial production, consumer spending, and the like – stayed sideways during the year of rate cuts, there’s definitely reason to be worried.

In other words, today is a little reprieve. Things are good enough that the FOMC can congratulate itself for a job well done, while sidestepping the obvious-if-you-look-for-it reality that this round of rate cuts was all about the stock market, not the economy.

But let’s be honest: almost everything the Fed has done since the Great Financial Crisis has been about the stock market. Quantitative Easing didn’t put money into people’s pockets; it supported stocks. The fact that stocks are up 230% since the start of QE while wages and savings basically 3 haven’t moved is clear evidence that QE caused inflation…but of stocks, not of consumer products. That inflation made the rich – those with stock portfolios – richer, while the poor have ended up with lower real incomes and higher housing and medical costs. What does it all mean for gold? Nothing and everything. Gold barely responded to today’s cut; it dropped $12 per oz. before the news and then quickly retook that ground before continuing a gradual ascent. 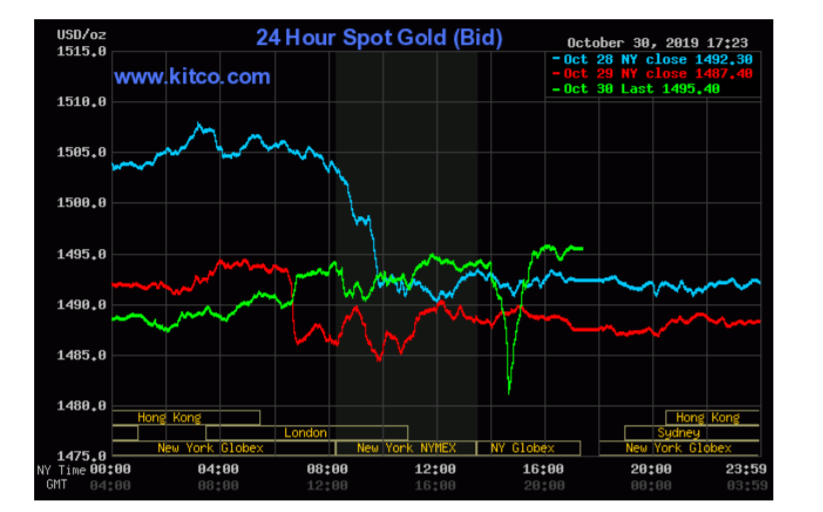 The yellow metal remains right near US$1500 per oz., a level it has held for almost three months. That is a show of technical strength.

Today’s rate cut pulled real rates in the US into negative territory. Negative real rates are the fundamental reason to prefer gold over dollar-based investments, as I explained last week.

The stock market is not going to get any more rate cuts in the near term, but it is getting $60 billion in QE each month. So stocks are likely to stay elevated until or unless something changes.

The trade war is the likely catalyst for change, for better or worse. I’m more inclined to the ‘worse’ side, as I think the Phase One deal leaves too many obstacles in place for trade – and therefore growth – to resolve in a material way. Watch high tech firms, as I think the trade war tariffs and bans that are forcing Chinese companies to find new suppliers for high tech parts will really hurt US tech firms…making these stocks, which have led this bull market higher for many years, the canaries in the coal mine for how damaging this trade war will be long term. And that damage will start to show over the next year.

In the meantime, the bond market remains backwards, Brexit is an endless mess, the trade war is highlighting huge philosophical differences between the world’s two largest economies (the NBA spat, anyone?), and gold is positioned as a safe haven answer to all these issues.

Will gold gain between now and the end of the year? Seasonality would say it won’t, though seasonal trends haven’t been strong this year. Gold may slide some in these final months but (1) any number of political or economic events could turn that slide around in a moment, (2) the price feels pretty well glued to $1500 and may simply hold here, and (3) no matter what happens, come January we’re very likely to get another run.