Base metals also attracted attention. Copper gained 6% over the week while nickel rose 8.5%. It helped for metals that the US dollar fell 2.4%.

None of it makes all that much sense, to be honest.

Why did the dollar fall right after the Fed maintained its hawkish stance, even as other central banks acknowledged a need to slow hikes? That should have strengthened the dollar. And why did gold gain when the promise of continued rate hikes kept real rates trending up? And why did base metals gain on news of continued action from the Fed to slow growth?

I think there were several forces in play, none of which likely have much staying power.

Late last week it was rumors of an end of Zero Covid in China that sparked optimism for growth. Since then, it’s become apparent that Covid Zero won’t be going anywhere at least until springtime, after winter cold and flu season and Chinese New Year. To be sure – it will matter when this policy changes. China has myriad growth problems right now but Covid Zero has exacerbated the struggle and alleviating that weight would help Chinese and global growth. But it’s not happening all that soon.

The next force played out yesterday, which was the US midterm elections. How and why this impacted markets is mostly a guess, one that will be validated or denied in the next few days. Forecasts for a red wave, with Republicans taking the House and the Senate, got traders excited. Why? Because of the idea that Republican control would mean fewer, or perhaps even no more, rate hikes.

It’s not an idea that makes sense, as the Federal Reserve is independent and only the President can fire the Chair, and even then only with good cause. Pressure from Republicans wouldn’t count as ‘good cause’ even if Biden thought it would help his cause…which I don’t think he would, as he’s acknowledged many times the need to raise rates to fight inflation.

Anyway, I think markets got bullish on the idea of more Republican influence on monetary and fiscal policy. With votes largely in, it now seems the red wave didn’t materialize to the extent expected. And given the Fed’s independence and the need to fight inflation, it was a misplaced bull rationale to begin with.

But the rationale still played out. And it caused enough gains to trigger a third force: short covering. It turns out silver in particular, and gold to a lesser extent, were both close to technical levels crowded with short trades – bets the price would go down. When prices instead went up, shorts had to cover and that pushed prices up more.

Short covering can be dramatic, but it’s not particularly sustainable. And any bull rationale around Republican wins charting an easier path for markets will likely ebb in the coming days. As such I think we could well see these gains ease.

Well, copper might chart its own path. Because of this. 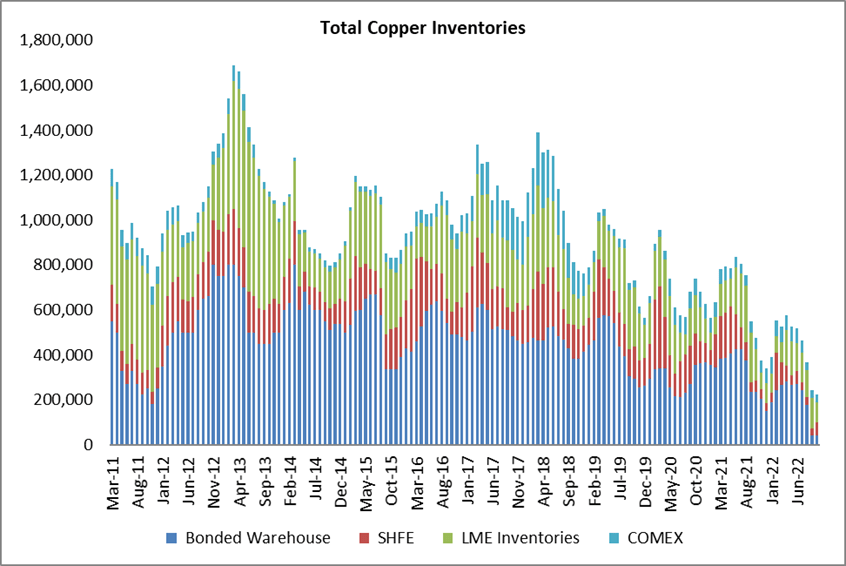 Inventories are incredibly low. There is very little refined copper available anywhere in the world today. This degree of tightness could certainly lead to price spikes on supply shocks over the winter. But such events are impossible to predict.

Getting back to the big picture: seeing metals react as they did to a not-even-convincing idea that growth might return sooner rather than later is heartening. It supports my outlook for how metals will perform once we really do get to the other side of this tightening cycle. And a few reasons have surfaced of late to think inflation may indeed be getting tamed.

One is that the New York Fed’s underlying inflation index, which includes core inflation plus other macro variables, has turned down. It tends to lead CPI by a few months. 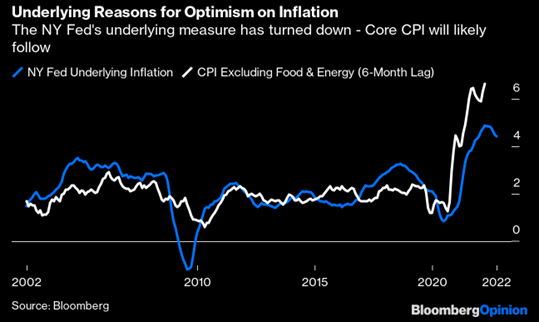 The last time there was a 2.2% difference between core CPI and the NY Fed’s underlying inflation count was in September 2009…and core CPI collapsed nine months later. No two situations are the same but the pattern is worth watching.

Another indication that inflation might be easing came from supply managers, who are reporting lower prices paid for the things they need: the ISM Prices Paid index dropped below 50 last month, for the first time since supply shocks sent prices for many things sky high. If pandemic bottlenecks really are ending, it helps lower inflation. CEOs are suggesting the same in their earnings calls.

It helps that commodity prices have come down. 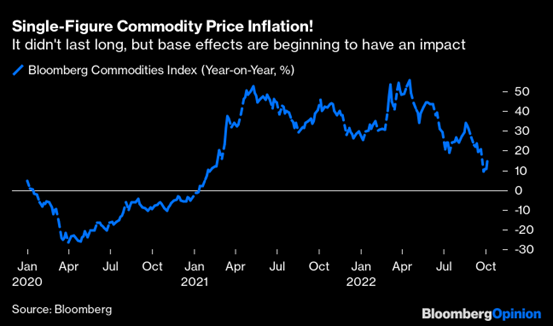 We will get October’s inflation numbers tomorrow, so by the time you read this another round of data will either support or deny this idea that maybe, just maybe, the tightening regime is working and inflation is coming down.

I’m excited for when it does. Because a week like this gets me excited for the metals market we’ll get on the other side of this tightening cycle. We’re not out of the woods yet, let me be clear…but things look bright when we do get there.