I noted above that gold stocks have been outperforming gold of late. The differences are not immense, but it is still very nice to see evidence that investors see opportunity in gold miners.

Those gold miners have been releasing Q1 results over the last two weeks. It’s impossible to summarize such a range of numbers but what I can say is that attuned investors are rewarding significant positive accomplishments, punishing failures, and leaving everything else pretty much alone.

Kirkland Lake Gold (TSX: KL)  has one of the best share price charts out there for a producing gold miner. 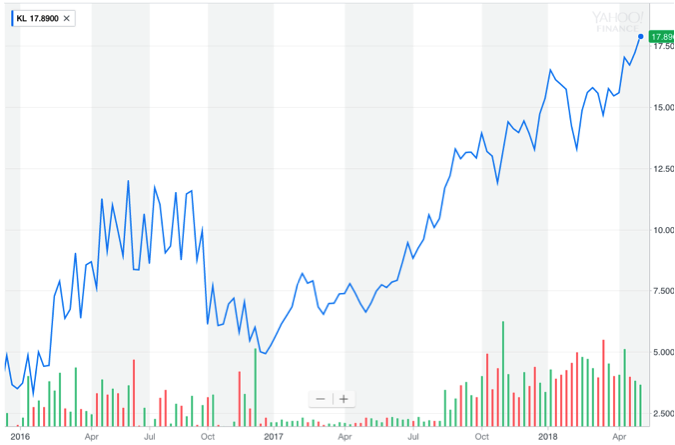 The company’s Q1 results continued its two-year upward trend with earnings that beat estimates, a rising grade profile based on new discoveries at operating mines, a significant increase in cash reserves, all-in sustaining costs lower than predicted, and an increased cash dividend.

Really, things couldn’t have been any better. Of course, those paying attention knew things were going well, which is why KL shares have been gaining sustainably for so long. 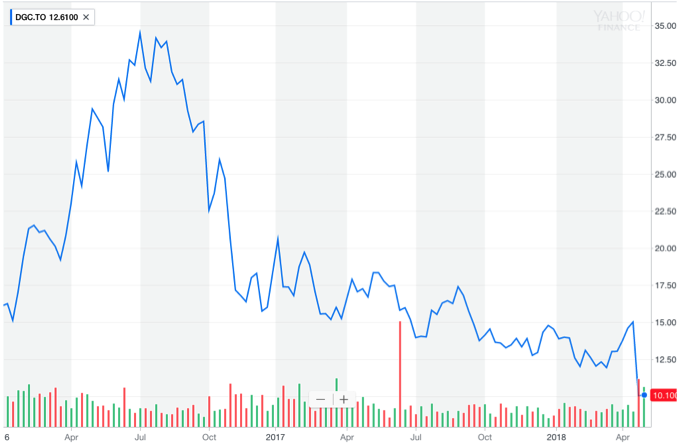 The company beat expectations for earnings but cut expectations for the future with a revised mine plan that boosted expected operating and capital costs over the rest of the mine life. Again, the writing was partly on the wall, which is why DGC shares have been hurting for some time.

The majority of miners, though, have been mostly keeping to the middle of the road. As long as they set and achieve reasonable goals, the market keeps them sideways. But in another interesting twist, I’ve noticed that investors are pretty attuned to exactly what is going on.

Alacer Gold (TSX: ASR) is a good example: the company produced some 25% more gold than expected in the first quarter and earned $0.09 per share, well ahead of consensus expectation of $0.05. The market was nonplussed. 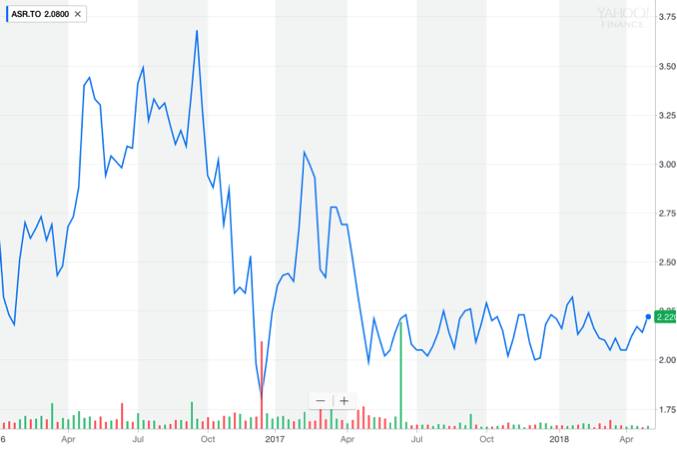 It’s possible the lack of reaction is because expectations are so high, but I think it is more because investors are savvy. In this situation, for example, Alacer’s higher production was largely from residual leaching rather than higher grades or throughputs (which is less impressive) and a deferred tax benefit combined with a forex loss actually rendered adjusted net earnings per share below expectations. It seems attuned investors saw through the headlines to the real story, which is just fine – nothing impressive or terrible going on – and held ASR steady.

Attuned investors are certainly a key characteristic of today’s metal markets. As I’ve said many times, for the sector to make a big move up we need generalist investors to rotate in. That has barely happened as yet, which means the investors who are playing are seasoned mining types. They don’t often get caught by headlines; they know to look at maps and cross sections before reacting to a drill result; they can see when a financing is coming. Sure, last year we saw some weak stories get what I would call undue attention, but in general today’s mining investors are a smart lot.

That is visible in the other thing that’s been happening in the sector of late: financings.

I talked in mid-March about how the sector is divided into Haves and Have Nots. Stocks in the first category have momentum: they can raise money, complete work programs, market their stories, and generally get things done. They got into this category through some combination of discovery, strategic interest, novelty and undervaluation, strong shareholders, and luck.

Some see share price gains; others see prices generally staying sideways. But in a market where investors remain limited and are smart enough to follow only the best stories, these stocks that have momentum are attracting all the attention and are having a reasonably good time.

Things are different for the Have Nots. These stocks – everyone else – are struggling to raise money, which means they can’t do anything else. In a vicious cycle, their lack of progress feeds a lack of momentum, reinforcing investors’ inclination to stick with the Have stocks.

So of course when I say that financings are happening, I mean they’re happening for the Haves. A few good examples from the last week: Pure Gold Mining (TSXV: PGM) announced a $17.4-million financing that it almost immediately increased to $20.9 million and SilverCrest Metals (TSXV: SIL) announced a $15-million bought deal raise that I understand is already full. Those are significant sums of money! So the fact that both financings filled up rapido shows there is capital available…for the Haves.