It’s been an interesting week for lots of reasons.

On the metals front: copper traded up through February to date putting it above US$4.50 per lb. Nickel has been on a tear and the last few weeks are no exception (there’s a big battle in nickel setting up between a few huge shorters and someone who controls an insane amount of the LME stockpile – read the story here – that has added fuel to the fire). Zinc is holding its ground, which means sticking at 5-year high levels. Lithium remains on a rocket ship to the moon. 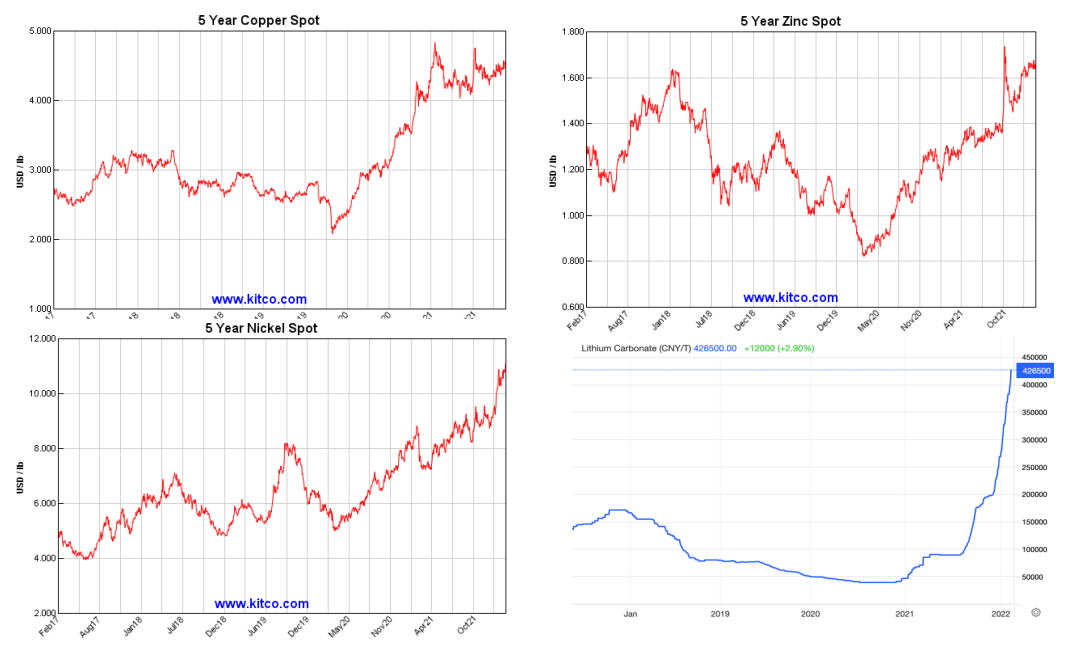 It’s all inflation and growth, layering on top of insufficient supplies to fuel the green energy paradigm shift. It’s forces that are here to stay for some time.

Let’s look at copper a bit more. The graph below comes from Goldman Sachs.

It shows the size of the supply gap ahead: an 8-million tonne annual deficit by 2030, in a market that’s 24 million tonnes today. Since the Refined Copper Supply line accounts for projects that are expected to start producing over the next eight years, new projects have to fill that gap.

In case I need to say it another way: there is a very real need for copper discoveries right now.

That need has me more interested in copper porphyry explorers than ever. I think I said it just last week but it bears repeating: it’s not easy to find an economic copper porphyry. The targets look super straightforward – drill the middle of that coloured blob! – but it usually takes several dozen holes guided by a few different explorers to make a discovery.

When it works, though – economic copper-gold porphyries in good locations are very valuable things.

I had two porphyry-focused explorers, one introduced last week and one this week. Because porphyries are hard to hit, I think a portfolio needs several porphyry seekers to have good odds of a win. We already have one that should get results from its first drill test in the next few weeks, and another that hit into one porphyry but has several as-good-or-better targets now lined up to test.

I added another copper company to the porphyry lineup last week. I got to that rationale in a somewhat sideways fashion – it was one of the stocks Quinton Hennigh and I discussed in our webinar because I had offered a financing to Premium subscribers when the company was still private. With the stock now trading, it was time to buy some in the market.

The other porphyry opportunity I’ll outline this week, because I decided I needed more copper exposure.

Of course, considering copper didn’t drag me away from gold. The first article was about gold: its recent moves higher, how much of that comes from the potential of Russia-Ukraine war (and what that war idea means, bigger picture, for gold), and the current technical setup for gold.

Then I provided the uranium update I promised last week. Cameco inked a pile of contracts in January – more than it signed in all of 2021! – in a move that likely presages another move up for uranium.

I answered two Mailbox questions, one on how to invest in uranium in a low-risk way and one on what compensation or benefits I get from companies (something I’m always happy to discuss because my business is founded on not taking money from companies so that I’m only motivated to serve my subscribers). That’s your free article for this week!

After that I provided some key points from that conversation with Quinton, focusing on points he made that I think added to my investment theses for stocks we both own. That led to the rationale for the Maven buy last week.

Finally, the $200,000 Portfolio (one added; one sold) and the Full Portfolio Table. To close, I had Portfolio Updates from seven companies.

A final note: One Maven company dropped like a stone recently. And I still haven’t decided what to do about another. I will put out a short note on both as soon as possible.

If you’d like to know more about the Maven Portfolio, or my selling and buying rationale, please subscribe to the full newsletter here

Can you offer your suggestion for a lower risk uranium play?
– Reader MC

Uranium has historically been a volatile space, with long periods of depressed prices punctuated by dramatic price spikes. If I thought the future would play out as the past has done, my answer would be: there’s no such thing as a low-risk uranium stock!

However, I think this market could play out differently in that I think the main fuel is a realization across the space that prices have to go higher and stay there to incentivize the building of the new mines needed to keep the lights on (feed the supply gap).

That doesn’t mean the spot price won’t shoot up, but I think the drop back will leave the price strong.

With that foundation, I think uranium stocks will provide some of the crazy volatility they have in past bull markets but I also think that investors won’t need to watch closely and exit as soon as things appear to turn down. That kind of attention and trading was needed in past markets or else one’s gains would evaporate. This time, I think close attention and trading might give one the chance to capitalize on spikes but a buy-and-hold approach will also work.

Since that’s my thesis, then any operating uranium miner or developer with a Tier One asset would be a low-risk play.

In a recent statement you said you receive no compensation from any of the companies you represent. Does that mean no flights no hotel rooms no meals no free shirts or hats no nothing??? Can you please make this crystal clear??? Thank you.
– Reader TG

The only way companies pay Resource Maven directly is if they want to buy reprint rights to an article that I already wrote. To be crystal clear – I never get paid to write about a company. But once an article exists, if the company wants to share it (send to shareholders or hand it out at a conference, for example) the company has to buy reprint rights. That has to be the structure (1) to protect paying subscribers from my content being shared willy nilly and (2) as part of legally establishing that my content is protected (should I ever have to go after someone for sharing my content without rights, a record of others paying for rights would be important).

As for site visits, I don’t pay all costs myself. Sometimes companies pay for flights; sometimes I do. TO be honest, I don’t really stress about that because (1) I have to be pretty interested in, or already invested in, a deal to go through the effort visiting and (2) often it would be impossible to pay for one’s own costs anyway, such as when a company charters a plane. I also don’t go on that many site visits anymore; the frequency declined significantly when my daughter was born and of course has been at zero since COVID. There is still merit in site visits but the bar of what I think I’ll get out of the trip is much much higher than it used to be! (Learn about a jurisdiction with which I am unfamiliar, get to know a management team by spending some real time together, understand the physical lay of the land and access, etc. at a mountainous property, etc.).