It goes without saying that investors want the bull market to keep going. Why wouldn’t they want a market that reliably doles out strong returns almost across the board? And the market has felt like it is acquiescing: the S&P 500 is basically at an all-time high. 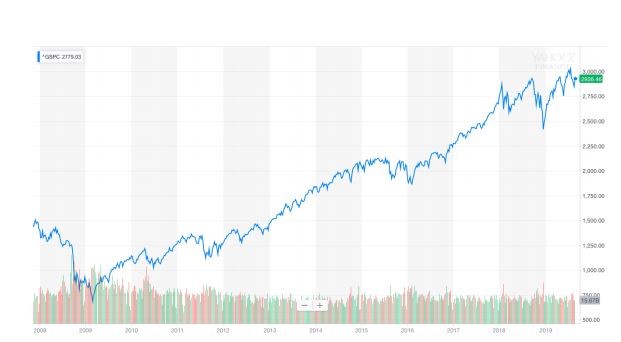 But zoom in on the last two years and the picture changes. It’s still an upward trend, but volatility has returned in a significant way.

Yes, the index is up 17% so far this year, but those gains were only possible because markets tanked late last year and then rebounded early this year.

It’s all a lot of bouncing around. In fact, since the start of 2018 markets haven’t actually made meaningful progress in any direction: the SPX is within 1% of where it was in January 2018. It’s been 20 months of volatile sideways.

The trade war and its fall-on effects on trade and confidence are, of course, the prime culprits. They are creating real reason to question the rich valuations in most sectors of the stock market. Add in Brexit, Hong Kong, oil tanker seizures, China letting its currency devalue, and all the usual politics here, there, and everywhere, and you have investors increasingly inclined to hedge their stock market bets.

Of course, most portfolios are hedged, with fixed income (bonds) balancing stocks. But as risk rises in the stock market, you need more and more on the other side to balance it out. That’s the safe haven trade – investors moving to low risk options when risks rise – and it is why bonds have always acted counter-cyclically to stocks.

Safe havens are absolutely in play right now. But while I hate to say It’s different this time, since that’s rarely true and usually a trap, safe havens truly have changed this time.

The chart below sums it up. 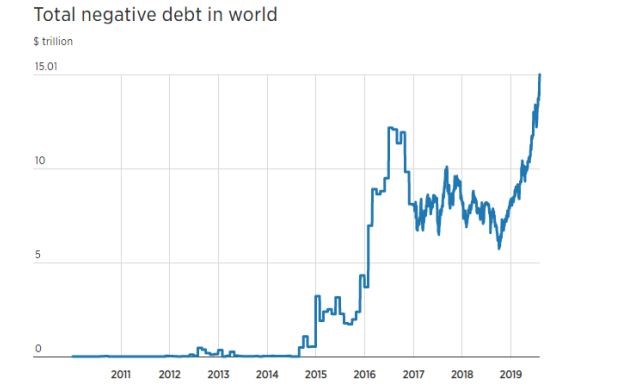 The market value of negative-yielding government debt has exploded to $16 trillion. Adding to that: at the beginning of June almost no corporate debt carried negative yield but now, just three months later, more than $1 trillion worth of corporate bonds charge yield.

How does this work? Why are investors even buying bonds that charge interest? Good question.

With bonds, as yield goes down price goes up, so buyers are gambling that the trend will continue long enough for them to exit at a price profit, yield be damned.

OK, fair enough. But there are two problems with that.

First of all, trading for price profit isn’t supposed to be central to the bond market. Bonds are supposed to be safe havens, bought for yield and held, not traded. So a bond bubble, with prices rising rapidly, is in itself unusual.

Second, the presence of so much negative yielding debt has ramification far beyond tradeversus-hold. If bonds don’t pay you to hold them, then all the low risk pools of money that have always invested primarily in bonds for reliable yields can’t do so anymore. Pension funds, 9 endowments, retirement pools, and the like have always relied on bonds for 6 to 7% annualized returns…but now bonds are charging you to own them instead.

What other options are there for these big pools of low risk money? Very few make sense. There are stocks, and you can try to hedge by buying counter-cyclical sectors. Certainly the bull market owes some thanks to pension fund managers for moving money into equities, both mainstream and counter cyclical, over the last few years in search of gains.

Other than that, there’s gold.

And that brings me to the other part of what’s different this time. The big argument against owning gold as a safe haven has always been that it doesn’t pay yield. On top of that, owning physical gold carries a cost (insurance, storage), so in a sense it charges you for owning it.

But both of those arguments are now invalid. Gold hasn’t started paying a yield but bonds have largely stopped paying yields! So bonds no longer offer that advantage. And with an everwidening range of investment options, from gold-backed ETFs to gold-based cryptocoins to gold miner indexes, you do not have to own physical gold and pay the related costs.

So the knocks against gold, versus bonds, as a safe haven have been silenced.

Moving on: how does gold rate against bonds in terms of counter cyclical performance? Turns out the yellow metal has done as well or slightly better than fixed income in times of extreme equity weakness. 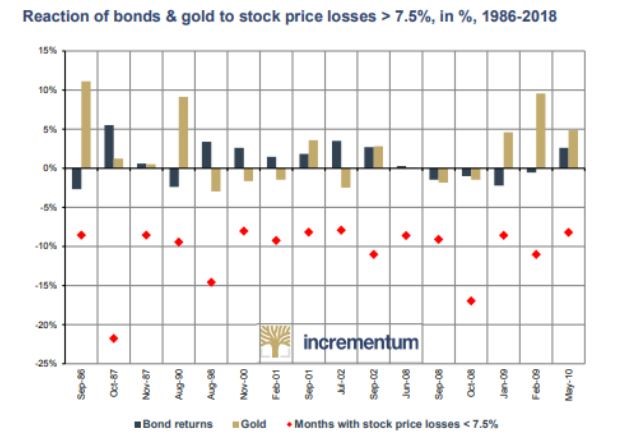 Money seeking low risk and counter cyclical returns has long flowed into bonds. But the new global interest rates reality means that the core reason for buying fixed income as a safe 10 haven rather than gold – yield – no longer holds. And gold does just as good a job hedging stock market weakness.

Famed investors and hedge fund manager Ray Dalio has been talking lately about the importance of recognizing paradigm shifts. Over time, fundamentals change in important ways; astute investors pay attention and get ahead of the shift.