M&A is always a good sign for the sector. However, all of these deals share one important similarity: a smaller miner facing dire financial circumstances. Which is why I don’t see these deals as a signal that mining M&A is hot. It’s just tepid.

In the case of Klondex, the company had overextended itself trying to grow production in recent years. Its growth had necessitated several credit facilities, gold loans, and gold streams that all hindered profitability; it ended 2017 reporting a net loss of US$23.7 million. The market watched the company struggle over the year and kept on selling, pulling Klondex down from $7.50 a year ago to less than $2. 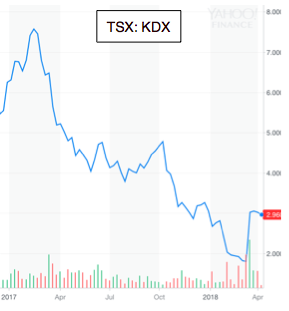 Recently it started to look like the worst might be over. Apparently Hecla had the same thought and moved on the company, offering a cash-and-share deal worth US $462-million. It was a move that made a lot of sense for Hecla, which gets to add considerable gold production and growth potential at a low low price.

Rye Patch is another Nevada producer that got into trouble, this time trying to get just one mine up and running. The company acquired the old Florida Canyon mine in mid-2016 and got it re-started producing gold a year later; the effort involved several credit facilities, two financings totaling $25 million, a 1-for-6.5 share consolidation, and all of the ramp-up headaches one expects at a gold mine.

Those headaches challenged Rye Patch’s share price from the moment it bought Florida Canyon. The price lost 60% in 18 months. 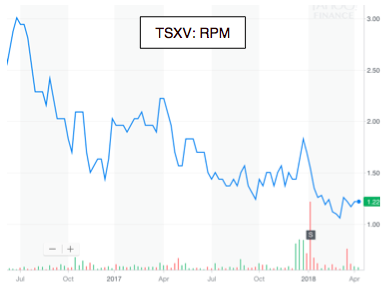 By early this year Rye Patch found itself with a very weak share price just as its mine was finally starting to work. Alio Gold saw opportunity and pounced, taking the company out in an all-share deal valued at $1.57 per share.

The third deal of late saw Gold Fields pay US$183 million in cash to buy 50% of Asanko’s namesake gold mine in Ghana as well as 10% of Asanko itself. On the surface it looks like a heady deal, given the amount of cash involved. On closer inspection, though, it was another major taking advantage of a cash-strapped junior.

Asanko reached commercial production at the start of 2017, after permitting a large mine churning through 5 million tonnes of ore annually from as much as 11 deposits. The company started smaller than that, tapping into three deposits to produce roughly 200,000 oz. gold a year.

The mine is operating, but with some key challenges. First, the company used a US$165-million loan to build the mine, which was coming due. And construction cost creep meant that a significant amount of stripping had been deferred in 2017, adding as much as US$70 million in costs for 2018.

Second, the vision involved expanding the mine, at an additional cost of at some $150 million over the next two years. That vision was going nowhere fast: the company was very indebted and the mine is yet to make money.

There is absolutely value in a permitted and constructed gold mine with clear expansion opportunity. Asanko is exactly that, and a fairly large mine at that. Yes, all-in costs are high and it has yet to generate any free cash flow, but costs should come down over time. And the greater Asanko project offers a lot of gold for a company willing and able to front the development capital.

Gold Fields is that company, or at least saw enough opportunity in Asanko to pay off the company’s debt in exchange for 50% of the mine. It was Gold Fields seizing the opportunity to buy proven production in a growing operation, which is a much safer way to add annual ounces than building a new mine.

Looking back at these three deals, I basically see opportunism. I actually dislike that word, as it has developed a negative association, as though a company shouldn’t take advantage of another company’s financial distress. But of course they should! That’s Mergers & Acquisitions 101.

The fact that deals today seemed mostly to be spurred by specific corporate situations means the market is still young. We aren’t seeing proactive deals focused on growth, such as majors buying development-stage projects they want to build themselves.

Deals are good, but the deal climate can best be described as tepid. It ain’t freezing cold the way it used to be, but it’s going to take a lot – higher metal prices, stronger investor interest in the sector, and some competition among acquirers for good assets – before deal making really heats up.