Gwen Preston – “If Things Get Ugly…”

Gwen Preston – “If Things Get Ugly…”

We buy gold as a safe haven investment. And we buy gold stocks because they offer leverage to gold’s gains.

But what happens to our portfolio when the real need for a safe haven emerges, in the form of a market crash or recession? It’s an important, if sort of ironic, question.

I’ve been getting a lot of questions about this issue lately. It’s no surprise people are asking: markets and gold are all over the place. In the last week of September markets climbed nicely on pro-trade deal noises, which means tweets from President Trump and official comments from ranking Chinese officials. Then the start of October brought weak manufacturing and jobs numbers and markets tanked. Gold moved in opposition, falling down through $1500 in late September with enough gusto that technical traders were shorting the yellow metal left and right and then rebounding strongly off those weak numbers. 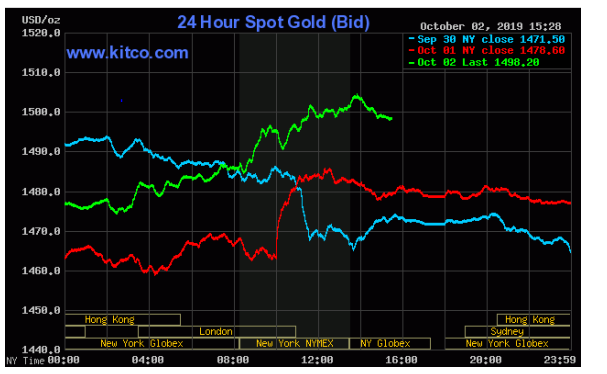 The rebound started with weak manufacturing numbers. The US ISM Manufacturing Index came in at 47.8% in September, its lowest reading since June 2009 and clearly in contraction territory. That sent markets down and gold up. A miss by the ADP private payrolls reading this morning amplified those moves.

The S&P was down almost 3% in two days. Gold gained almost that much.

I’ve pointed out many times that investors really want the bull market to continue. Evidence abounds, especially in how markets surge when the Fed cut interest rates (highly ironic, to surge on a move that stems from economic weakness, but investors have learned to love central bank support!) and gain on tweets suggesting progress towards resolving the trade war.

But for markets to slide on weak manufacturing and employment data shows us that investors are clearly aware risks are rising.

It’s fine to want an endless bull market, as long as you also pay attention to reality. That describes today’s investor, who has to back off on optimism whenever negative data emerges.

We’ve been in this balancing act for some time already, but the negative data is starting to pile up. Let me go through just the charts that caught my eye this morning.

The first is insider sales. Insiders have sold $19 billion worth of stock this year; if that pace continues, insider sales will hit $26 billion this year. That would be a two-decade high. Insider sales are a leading indicator of weakening markets. 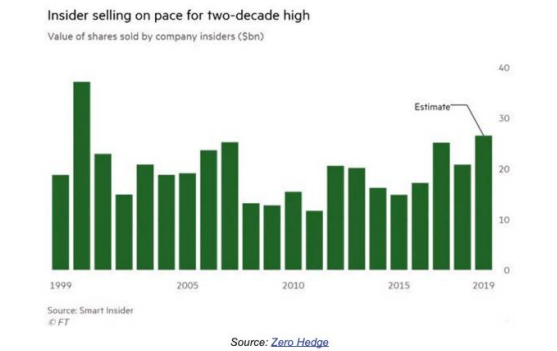 The second compares interest rates in the US with the rest of the world. We know the US has higher rates; I like these charts because they show how a big gap in rates between the US and other developed countries, like we have today, has historically prefaced recessions and market corrections. 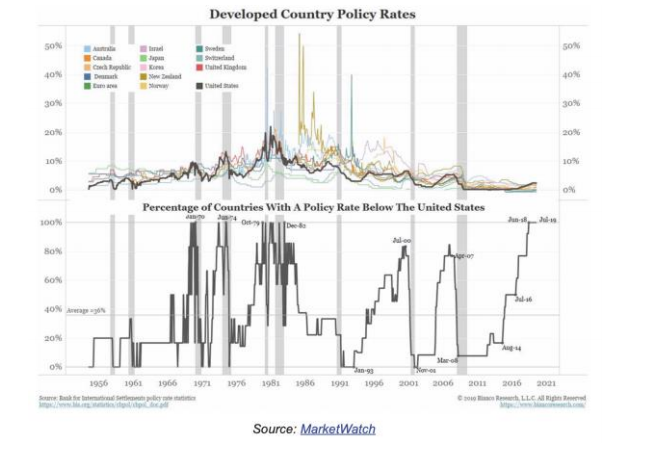 Then there’s politics, which is tangibly adding risk. There are the impeachment proceedings, to be sure, but the US presidential election is just over a year away and that has the potential to bring major disruption. Elizabeth Warren’s odds of winning have climbed in recent weeks to almost match Trump’s odds. 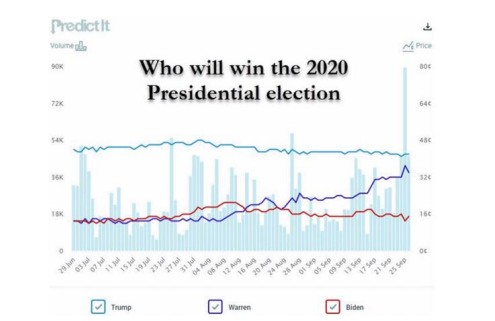 I’m not including this as an outcome prediction in any way but as a concrete example of how political uncertainty impacts the markets. Warren’s stance of Medicare and access to drug coverage means that as her star rises, biotechs fall.

That’s a smattering of reasons to be worried about a recession. And I’m talking about recession risk here for a particular reason: I’ve been getting a lot of questions about how gold stocks will perform if markets crash.

It’s a good question. Gold the metal is a hedge against economic calamities, but stocks are stocks. So how do gold stocks perform if things get bad?

In general, gold stocks get sold off alongside everything else in the case of a market crash. It’s a baby-with-the-bathwater situation. As such, if you are certain a crash is coming you should sell everything, including your gold stocks, and be prepared to re-enter once things crater.

But you should buy back your gold stocks first because gold gains in times of economic crisis, which means gold stocks are among the very first to recover. And they often recover in spectacular fashion. The Great Financial Crisis is a good example. The chart below shows GDX, the Van Eck index of gold mining stocks. It tumbled alongside everything else in late 2008…but it had regained its previous level within a year and two years out was up 40% from its pre-crisis levels and up 240% from its crisis low. 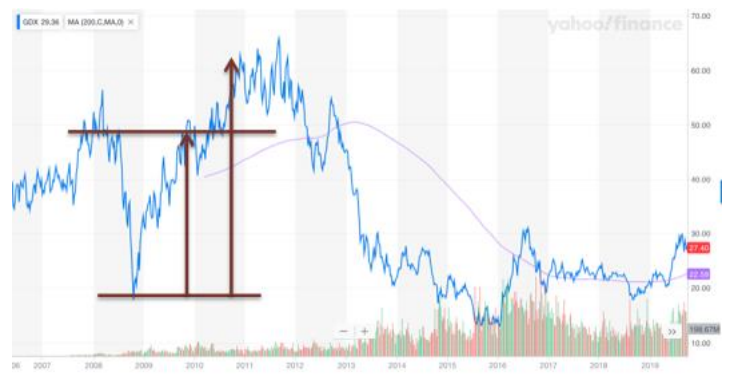 Now, the stock market crash of the GFC was a sudden event. It was truly a crash, not a downturn. Should we run into a similar crash, I would expect gold stocks to react in a similar way. And I should also note that gold the metal made similar moves: it fell from $950 per oz. to $750 per oz. during the crisis itself but retook that ground within a year before powering much higher from there.

I do want to note, though, that gold and gold stocks would likely perform better – lose less ground – if we have a more gradual event.

I do not know whether we are headed into a correction or recession, much less whether such an event is likely to be sudden or gradual. All I can say is that, at the moment, data is weakening and gold is strengthening. With those patterns in place, gold miners are generally gaining on days when the market slides but gold rises.

The last five trading days are a good example. Here’s how the GDX performed:

If you believe strongly that a crash is coming, you should keep a fair bit of cash on hand to buy after the event. If you are worried about global economics but aren’t in the business of predicting the future, hold your gold positions. Certainly, it’s always a good idea in troubled times to have cash on hand, but if you are not 100% convinced that a sudden crash is coming then cash likely shouldn’t be the focus. A portfolio of good gold stocks will fare just fine in a gradual downtown and will retake lost ground quickly in a sudden crash.

You can always use cash on hand to add to your positions if a crash does take gold stocks down, but if no sharp event happens then you are already positioned for gold bull market that is underway, whether it has to take a broad market crash in stride or not.