Newmont has offered to buy GT Gold (TSX-V: GTT) in a cash deal valued at $456 million. The price represents a 38% premium to GTT’s volume-weighted average share price in the preceding 20 days.

More importantly: the deal shows a mining sector working the way we, as investors, want it to work.

Junior companies are supposed to explore, make discoveries, expand those discoveries, wrap initial economics around deposits to show that they work, and all the while foster strong relations with all stakeholders so that the project has support.

Major miners engineer, build, and operate mines. They do some exploration but not a lot, and what they do is specialized: they take on the kinds of exploration that are too expensive for a junior to do, such as figuring out a new, district-scale area or drilling deep targets where each hole costs a million dollars.

As for the period in between defining a great new discovery and building a mine – that can end up with a junior or a major. It’s the not fun part, though, as the Lassonde Curve lays out. 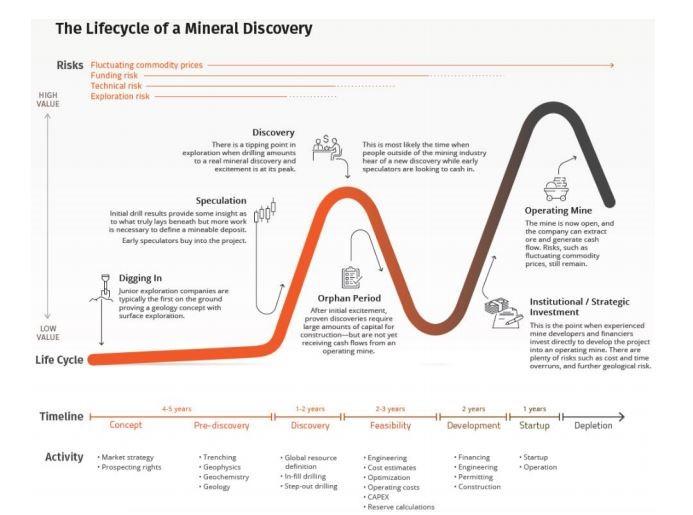 The ‘Orphan period’, as this version of the Lassonde curve from Visual Capitalist calls it, is a grind. It’s expensive, it takes a long time, and it leaves the company exposed to two big risks that are largely out of their control: permitting and metal prices.

Which size or kind of company should bear this burden differs from project to project, bull market to bear market, and management team to management team.

What works best for the investor, though, is for a midtier or major to buy a project when the first wave of excitement and value growth is peaking.

And that’s pretty much how it went for GT Gold. I was an early GT Gold investor.

I offered the Go Public financing to my (then very small!) Premium subscriber list and participated myself, investing at $0.15. When it came to trade via an RTO, I wrote about the opportunity in The Maven Letter.

Then we went on a wild ride! 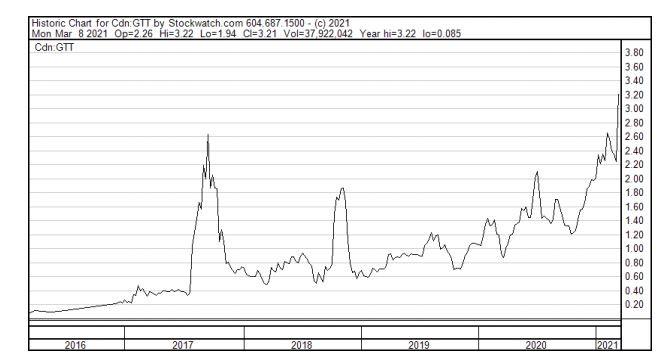 You can see GTT drilled into its first discovery in mid-2017. That was Saddle South, a vein system that returned some very nice gold numbers in its very first drill program.

Allow me to also use this as a teaching moment: vein systems can kick out great grades but following up on a vein discovery is just very risky because (1) vein mineralization is notoriously inconsistent, so (2) it’s really hard to demonstrate that a vein discovery has continuity and therefore scale.

That risk played out for GTT. The stock jumped from $0.35 to a high of $2.60 on the initial discovery…but it slid back down to $0.60 within months as subsequent holes did not live up to expectations.

Investors disappointed in the vein system at Saddle South didn’t pay much attention to the final result from the 2017 program.One of the two holes drilled into a large adjacent porphyry target dubbed Saddle North returned 135 metres of 1.34 g/t gold and 0.37% copper. Not a phenomenal intercept but an important one given that the core showed they were into a porphyry, while geophysics suggested the best was yet to come.

In 2018 GT split its attention between Saddle South and North.In September, they announced a hit of 822 metres grading 0.42 g/t gold and 0.26% copper. The hits went on from there, consistently long and well mineralized.

The share price didn’t reflect the porphyry’s consistency! Here’s another teaching moment: seasonality. The market may have liked the result from Saddle North and boosted GTT in the last quarter of 2018, but it’s really hard for investors to hold through the long, quiet winter. Seasonality is the main thing I see when I look at this lumpy share price chart.

2019 and 2020 were all about fleshing out the porphyry. Newmont invested in one of several major financings. In July the company issued a maiden resource estimate, which set the stage for what happened next. The resource was huge: 298 million indicated tonnes grading 0.28% copper and 0.36 g/t gold plus 543 million inferred tonnes of similar grade, for a contained metal count of 4.8 million lbs. copper and 8.9 million oz. gold.

The problem was grade. Management decided to go for scale, which resulted in a huge resource but one that did not appear economic to mine. The market sold, creating the price slide you see in the second half of last year.

A major investor decided management had mis stepped too far and started a proxy fight. That was still in progress and a shareholder meeting to decide the winner had been set for mid-April.

That meeting is now cancelled because getting bought out erases the need for management!

That brings me back to the reason I started writing this, which is that GT getting bought now is the mining sector working just as it should.

GT Gold is an exploration company. Its team evolved over its four years to bring on more engineering and operational expertise and its shareholder base I’m sure shifted from pure retail to include a lot of the institutions that own more advanced stories, to mixed success as I’ve outlined. But no matter the people in charge, GT Gold would have struggled to attract a lot of investor attention from here.

The company was planning to issue a PEA next quarter, which would likely have impacted the stock for better or worse. But once a PEA is issued a project, especially a big porphyry, becomes the definition of boring. Saddle North will need years of drilling, engineering, and permitting before it might become a mine. If we indeed get the strong metals bull market that I expect the stock would have offered slightly levered performance on metal price gains. I say ‘slightly’ because a project so far from a build decision is barely even an optionality play. It’s just boring.

Instead, GT shareholders get a 38% premium after a nice share price run in the last 18 months. This is Newmont taking on the expense and hard reality of turning a discovery into a mine, something majors should usually do (and especially when the mine will involve underground block caving, which is true Major Miners territory).

It’s a great outcome for GT shareholders and for the sector, which rightfully gets buoyed when a big deal happens just when it should.

And it underlines my M&A outlook, which is that deals will ramp up. Majors are flush with cash and short on projects, so they are about to start seriously shopping. (That was the main reason I chose to hold the advanced projects in the Maven portfolio, as I explained in the February 10th article Advanced Assets…Stocks In Limbo – a boring gold market has these stocks in limbo but deals are going to start happening and I want to own targets.)