Gwen Preston – “Copper: A Price Double Hasn’t Created Supply…So What Will It Take?!?”

Gwen Preston – “Copper: A Price Double Hasn’t Created Supply…So What Will It Take?!?”

Copper is a big, liquid, and essential market. It’s called the PhD of metals for a reason: economic growth requires copper and so demand for the red metal reliably ebbs and flows with the economy.

The copper bull market of the 2000s was driven by massive industrial growth in China. The speed and scale of that growth story was so immense it seemed no subsequent bull market could ever live up.

But I think the one that’s coming will be bigger.

The green revolution is amplifying the amount of copper that’s required in almost everything. Electric vehicles are a common example for good reason: a conventional car uses about 22 kg of copper while an electric vehicle uses 53kg. That kind of increase is simply part of the deal when you rely on electricity, rather than combustion, to power things.

And so you have global copper demand doing this. 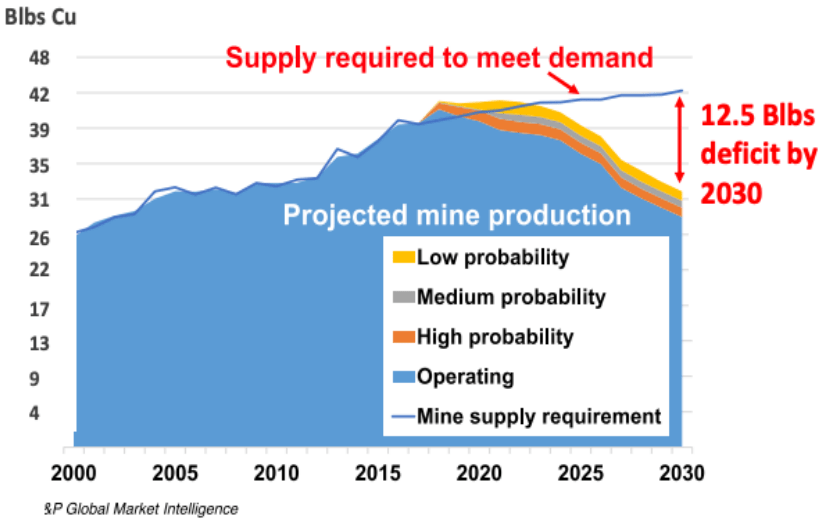 And it’s been a-ok for two decades because supply has kept up. But supply is about to fall off a cliff.

This is where the story gets really interesting, in my opinion – and why it carries such investment potential.

By the middle of this decade – so starting in two years – we will face the largest copper deficit ever. Two years is nothing in the copper world, where projects regularly take over a decade to get permitted, financed, and built (sometimes two decades).

How have we gotten to this point? It’s a good question. For starters, the copper price is up a lot over the last two years. Shouldn’t a doubling of price encourage some new production? 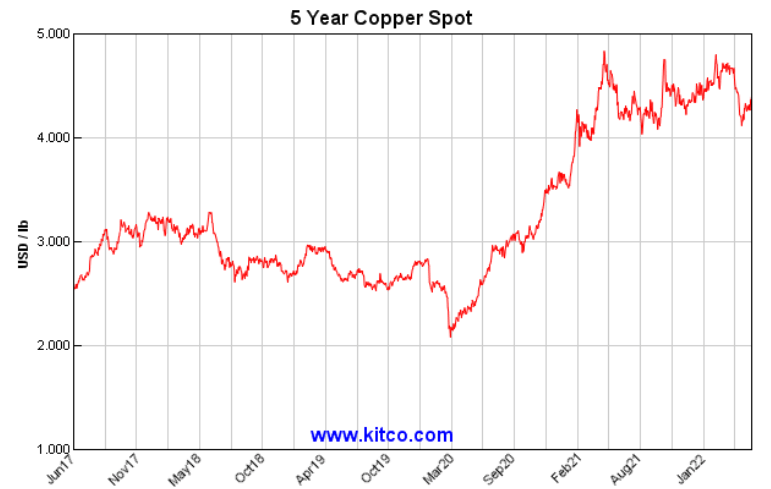 Here is where today’s copper story diverges from the copper story of the 2000s. In 2002, when the scale of pending Chinese copper demand became apparent, there was an almost immediate supply-side response. Companies pushed projects ahead, permits were achieved, capital flowed in, and supply increased in lockstep with the price.

This time, the supply is not responding. Around the world, not a single new copper mine has achieved a building permit in the last two years. Capital is not flowing into the copper sector. And companies are not pushing projects forward aggressively.

There are myriad reasons.

Those points all make sense. But they leave us literally between a rock and a hard place. Copper is not fungible. There is no alternative. It is such a good, safe conductor that it has absolute primacy in its uses.

And so we need to produce more copper. But after a few mine expansions wrap up over the next 12 months, production peaks and then starts to decline about 1% annually from 2024 onward.

What changes that? Price. Since there are no real or significant substitutes for copper and because the green revolution is undeniable, demand is unlikely to falter. And so it will become a game of scarcity. And in those games, price always wins.

It’s also important to note that copper doesn’t represent a large enough portion of the cost for most of the things in which it is used to derail plans. Take electric vehicles, for instance – for copper to double in price again from here would still not impact end car prices much.

How high will copper go? The question is really: how expensive does copper have to be to start destroying demand? To start slowing green buildouts and impeding overall growth? Goldman thinks the number is $15,000 per tonne, which is 55% higher than the price today. Shooting past that on the way is certainly likely.

Yes, the price has already doubled in two years. But today’s price is still not moving the needle at all in terms of investor interest, corporate caution, or end-users stepping upstream to secure supply. To me, that suggests there is still a lot of room to run.

A good analogy someone referenced recently is oil in the 2000s. It started at $15 per barrel…and ended at $140 per barrel. It took a 7X in price to force the market to adjust to the new reality. For oil, that meant demand destruction and finding a new source of supply in fracking. (For copper, new sources of supply are very unlikely.)

It takes incredible price moves to shift an entire market. But the lack of supply response as we come up against the largest shortage the copper market has ever seen to me underlines that copper needs several dramatic shifts – from miners, investors, and users. And given how close the shortage now is, I think the shift will come all at once propelled by a dramatic price gain.