Gwen Preston – “Consolidation – Guaranteed, But Who?”

Gwen Preston – “Consolidation – Guaranteed, But Who?”

There’s a topic in the gold space that I haven’t given its due: consolidation. I was reminded of this when going through some notes gathered since the start of 2020, including a Bloomberg article based on interviews with the top executives of the world’s biggest mining companies.

It was really a series of quotes from these CEOs on what they see ahead in 2020. A few key themes emerged quite clearly, including the need for higher copper prices to incentivize the new mine builds needed to supply future demand, the need for gold miners to operate as businesses focused on profit rather than scale, and the need to put real focus into environmental and social practices.

But the one theme that every CEO mentioned was consolidation.

Clive Newell, First Quantum: “Pent-up demand and cash should spark mergers in the sector… It takes just one deal to start a rush.”

Richard Adkerson, Freeport: “M&A is likely in the sector, though requires clarity on copper price.”

The other theme that arose time and again with the gold executives: miners need to at least replenish if not grow reserves, but not through higher gold price assumptions. (Reserves are tonnes of ore that appear economic to mine based on a pre-feasibility or feasibility study. Whether a tonne of ore is economic to mine depends on the gold price used in the calculation; higher prices boost reserve tonnes or ounces but investors want to see real reserves growth against a constant, conservative gold price assumption.)

Great example in a quote from Agnico Eagle’s Sean Boyd: “The greatest challenge for the industry is replacing reserves. Growth is always tough, but to grow in a way where you’re actually improving the quality of your underlying business is extremely difficult.”

Finally, there remains a shortage of investment capital. To compete for the capital that is available, small and mid-tier gold producers need to show growth potential.

Add of that together. There are about three dozen gold miners with market caps over $500 million; they all need to at least replace reserves if not show quality reserve growth. And this isn’t just hypothesizing: as their quotes show, the CEOs of these big producers are united in seeing more deals on the horizon, which matters given they are the ones who would be the big fish in many such deals.

Then there are another three dozen producers below $500 million market cap that need to show a pathway to growth in order to attract investment capital.

So the endless talk in our space about M&A is warranted. At the same time, one of the reasons miners have underperformed so far in this gold market is that investors remember all the money miners wasted in the last bull market on bad deals. In the mid to late 2000s major miners almost across the board made disastrous investment decisions, from overpaying for acquisitions to pushing marginal development projects ahead, and in doing so they destroyed tens of billions in value.

When the bull market ended, companies had to make amends. They spent the bear market cutting costs, cancelling marginal projects, streamlining operations, and focusing on profit rather than production. During the bad years those moves were simply necessary; now that gold is rising again, miners are set up to actually perform.

I say ‘actually perform’ to mean: gold companies are set up to generate profits and pay dividends that compare favorably against any company in any sector. Given that a strong US stock market has been gold’s biggest competitor, for miners to stand out they have to perform well against Walmart and General Electric. If gold companies make financial sense against big US stocks while also offering the risk hedge of gold, it should win back the generalist investors who got burned before.

OK, I started talking about consolidation and ended talking about how gold miners have to show strong profits in order to compete against the rest of the stock market for investor attention.

So which is it? Will they do deals for new assets or not?

They will – but only for the best projects.

What does that mean?

These assets are already getting lots of extra attention. Take a look at these share price charts.

Integra Resources (TSX-V: ITR) released a PEA on its Delamar project in Idaho in early September. The study outlined how the resource currently defined at Delamar could host a mine producing 124,000 oz. a year for 10 years, at an all-in sustaining cost of US$742 per gold-equivalent ounce after a capital investment of US$161 million. In other words, the study made clear that Delamar met all the criteria listed above. In response the market re-rated the stock, lifting ITR from ~$0.85 to ~$1.30.

There was no single event that boosted Marathon Gold (TSX: MOZ) this year. Instead the company gained consistently as incremental steps kept bolstering the strength of the Valentine gold project in Newfoundland. Valentine has a strong PEA outlining a high grade open pit gold mine producing 225,000 oz. gold a year for 13 years for US$666 per oz. That study came out 15 months ago; in the time since the company has upgraded the resource confidence and simplified the mine plan, efforts that will be laid bare in a pre-feasibility study due out by mid-year. Permitting is already underway. This is a big, advanced, straightforward project in a good jurisdiction and the market knows it.

Sabina Gold & Silver (TSX: SBB) similarly did not take one specific step that attracted market attention but just kept advancing its permitted Back River project towards development. Back River, located in northern Canada, is ready to be built as a large and very high-grade open pit gold mine. Rather than finance and build now, however, SBB is doing more drilling to test a series of new discoveries and extensions that have the potential to make this very good project even better. 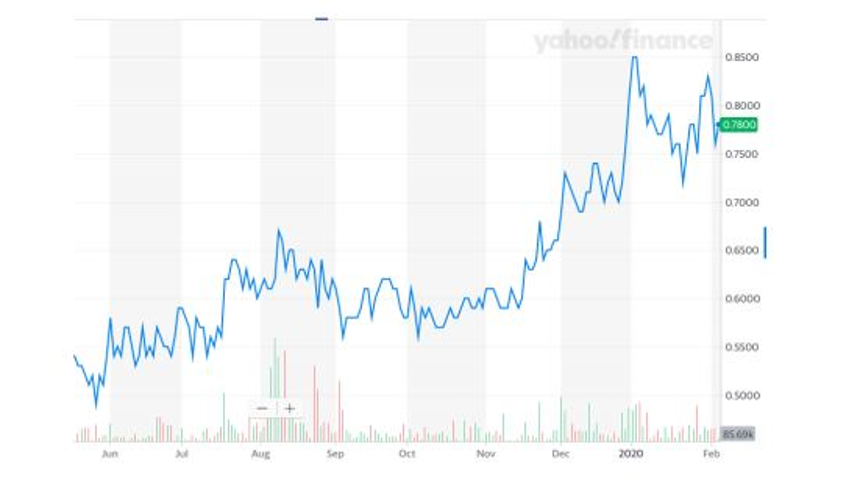 Pure Gold Mining (TSX-V: PGM) is halfway through building a mine at its Madsen project in Red Lake, Ontario. Madsen is a classic Red Lake deposit: a narrow high-grade structure with strong continuity. Goldcorp became the mining giant that it is by building a mine in Red Lake on a good but small deposit and then exploring from there, work that led the miner to bigger, better zones within the same system and supported a mine that is still going 70 years and 25 million oz. later. Pure Gold is working to follow the same path and is having very good exploration success around Madsen. The Red Lake district is in transition now that Goldcorp has sold its mines to Evolution Mining but ownership changes don’t alter the rocks and Pure Gold is about to start tapping into gold in the rocks at Madsen while it works to find more. Aside from being slightly small, this asset ticks all the boxes. 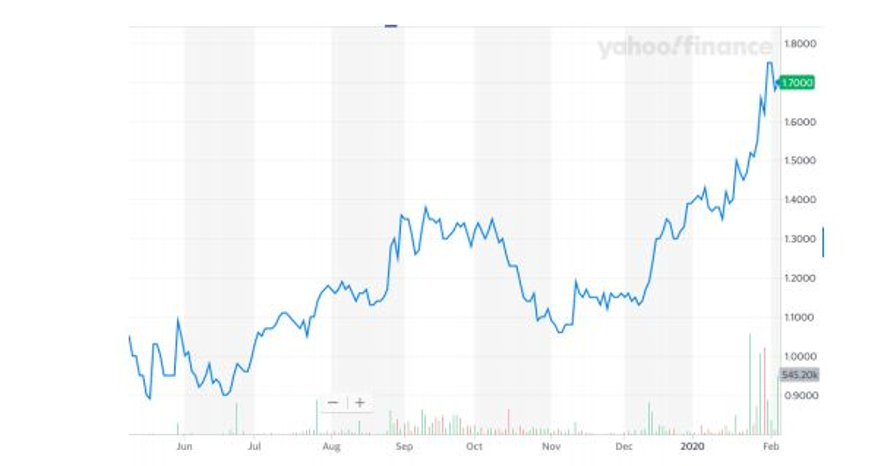 Bluestone Resources (TSX-V: BSR) is primed to make an official construction decision at its Cerro Blanco project in Guatemala. Cerro Blanco is permitted and already hosts 3 km of underground workings, a power line, and a water treatment facility. All the infrastructure means it should only take US$196 million to get this mine built, at which point it should start producing 113,000 oz. gold a year for US$579 per oz. AISC. The mine life is only 10 years but Bluestone’s drilling success since acquiring the project 2.5 years ago suggests there’s more gold to be found here. 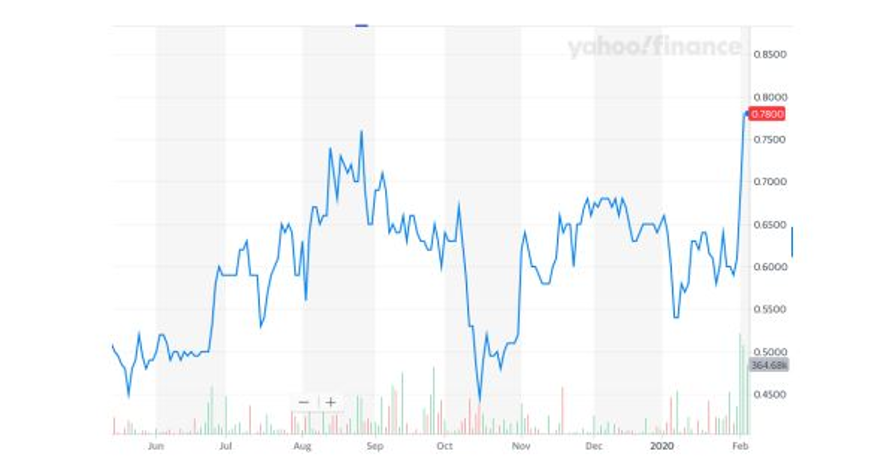 This share price chart doesn’t show as much of a run as the others – but I posit that’s because this run is just getting started. Revival Gold (TSX-V: RVG) shares many similarities with the stocks above: its project is an historic mine with significant remnant opportunity, it’s in a great jurisdiction (Idaho), its management team comes from major miners and funds and so is clearly focused on creating an asset that bigger players will want, and a new resource update just boosted the gold count at Beartrack to 3 million oz. News of a 3-million oz. resource in Idaho from a not-yet-well-known stock is what pushed RVG from $0.60 to $0.78 in recent days. The market suddenly realized that RVG not only exists but might soon join the short list of projects that majors will want. If that is indeed how it plays out, then this share price jump could be RVG starting on an ascent like the stocks above.

The point is: the market is well aware that miners need to replenish mined ounces but the bar has been lifted way up in terms of demanding projects of standout quality. The higher bar plus the long bear market mean there simply aren’t very many projects and companies that are truly on the takeout target list. The list is certainly longer than the stocks shown here, but not dramatically so!

If you want to own a stock that gets taken out for a premium in this bull market, own big, advanced projects with strong economics, simple mine plans, and exploration potential in good jurisdictions. The list is not very long; the stocks on it are already outperforming the rest of the gold space and will continue to do so until they are all taken out.